The Surprise of Order 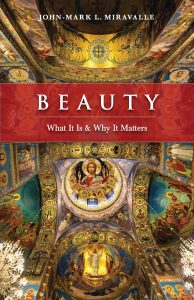 A plate garnished and well seasoned, a garden bed of blooming flora, the yawning archways of a grand cathedral, and the eyes of a lover: all have the shared attribute of beauty. Yet the essence of beauty can neither be limited to a single creative outlet, nor can it be defined by the whims of personal taste.

Beauty is something that extends beyond the confines of such labels. It belongs to that realm of transcendentals championed by the classical Greek thinkers. Truth and goodness are its immediate contemporaries, and it is placed within a classification system, perhaps to be filed away. In this way, it is known partially and only then by comparison. The persistent question of what actually constitutes beauty is often hard to nail down.

Beauty always attracts. We are drawn to it. We desire it. We express it. And, ultimately, we aspire to it. Nevertheless, it is debatable whether people are more readily able to define truthfulness and hail someone as being good before they can give a convincing explanation of beauty. A charitable woman might be called good. A man who gives an accurate account of an event might be called truthful. But when something is acclaimed as beautiful, the claim can bring controversy rather than clarity.

Pontius Pilate’s weighty inquiry, “What is truth?” would be no more significant than asking “What is beauty?” Both questions come with philosophical and moral implications. These very issues, with special regards to beauty, are addressed in John-Mark L. Miravalle’s work Beauty: What It Is and Why It Matters. In doing so, the author pulls from the Greek fathers of a priori philosophy to St. Thomas Aquinas, from G. K. Chesterton to Hans Urs von Balthasar and C. S. Lewis, from papal documents to the Scriptures. The greatest thinkers have honed in on particular manifestations of beauty, all of which are the handiwork of a master Craftsman. Naturalist and environmental advocate John Muir summed it up nicely in so many words: “No synonym for God is so perfect as beauty.”

In a tangible appraisal of this most elusive transcendental, Miravalle’s book gives two criteria that must be present in anything that is to be called beautiful. First, beauty requires order. Such an order is fulfilled in the melody of song or the visual aesthetics of painting. Second, there is meant to be an element of surprise or even mystery. This can come through unique presentation, unanticipated imagery, and other methods.

Stunning examples of surprise can be found throughout nature. Biologists continually discover new species of organisms, and some of their capabilities and body structures are truly surprising. The platypus is a mammalian creature that lays hard-shelled eggs, a trait primarily given to reptiles; it’s an anomaly among the animal kingdom. The horned lizard’s defense mechanism is to squirt blood from its eyes. Mathematicians have discovered the Fibonacci numerical sequence in the spiral geometries of sunflowers and Nautilus shells. These facts pique our interest. They add to our fixation on the beautiful, let alone to the argument for intelligent design.

In nature, we constantly stumble upon the unexpected. The surprising attributes of the Creator’s beauty are perceivable all around us. This sense of the mysterious, of something beyond our cognitive grasp that merits investigation, is duly noted by any diligent scientist. The famed physicist Albert Einstein accentuates this when he tells us:

The most beautiful thing we can experience is the mysterious. It is the source of all true art and science.

Einstein attributes some of the noblest human endeavors to the beauty of “the mysterious.” Scientific studies more often than not lead to more surprises and more inquiries. Miravalle further undertakes the description of the element of surprise as something that is both new and filled with splendor. Beauty evokes awe, and it need not deviate from tradition, but can arise from a droll rehashing of an old image. It expresses something in a manner that casts a new light on a familiar subject. Beauty has the vocation of presenting someone with an ageless and unchanging truth in a unique, creative way. Perhaps it’s a different angle or tone or genre, but the beauty of tradition shines through its vibrantly renewed arrangements regardless. The truth remains constant, while the medium continuously evolves.

If we now refocus our attention on the orderly side of beauty, we find that it too is supported by critical thinking. Order is an inherent part of nature and of law. And Russell Kirk highlights its spiritual dimension, saying, “Order is the first need of the soul.”

Given this dimension of order, beauty is understood to be essential to spiritual health. John Muir, for instance, believed beauty has the ability to “heal and give strength to body and soul.” He found it out in nature. But the same beauty is communicated through countless outlets: Liturgy and literature, art and architecture, and more. In comparison to the other transcendentals, truth and goodness, a better understanding of beauty can be gained when the author states that truth, goodness, and beauty are all synonymous. They cannot be detached but share a triune relation. As Miravalle writes:

As beauty can be defined as displaying certain qualities necessary for its legitimacy, it has to be an objective reality. From this understanding of what beauty is, Miravalle walks the reader through numerous examples of moral creativity that manifest authentic beauty as well as examples of immoral art. In doing so, he addresses the moral roles one is obliged to consider when interacting with beauty, either in examining it or in communicating it.

On the consumer’s side of art, Miravalle addresses the pornography plaguing numerous visual forms of expression such as cinema and ventures into Church teachings on the matter in a tone of condemnation. On the maker’s side of art, he argues that every person has a moral responsibility to present beauty (or truth or goodness) in an enticing way. If you fail to give witness to the beautiful in an engaging way, your action has led to people becoming disinterested in truth. This, the writer claims, is a moral shortcoming.

Beauty can also be slighted when an artist’s primary objective is not to communicate a truth but to make a name for himself. When this happens, the artist frequently ends up displaying a defect or excess of either order or surprise, thus disfiguring the message of the work of art. When it comes to the medium of architecture, Miravalle mentions the ancient story of the Tower of Babel, a design attempted by those who desired to make a shem (a “name”) for themselves. As he says, we “often tie our buildings to our own sense of self-importance.”

Architecture is rife with such examples. Charles Foster Kane and his self-monument Xanadu of cinematic legend; Herman Melville’s fantastical Bannadonna with his Bell-Tower and clockwork; the historical account of Alessandro Farnese’s commissioning of the Palazzo Farnese: these are but a few memorable examples showcasing how men attempt to immortalize themselves in their creative achievements. However, the vanity of the artist only fractures the potential of the art.

In the second and third segments of the book, Miravalle individually considers media including music, architecture, culinary creativity, and the liturgy. Eventually, he must touch on the subject of divine beauty. Through Thomistic principles, he advocates for the beauty of the Holy Trinity. However, he goes a step further when he claims the gory scene of the Crucifixion is beautiful. Beauty, being a transcendental, points to something beyond itself. Similarly, the Cross points beyond itself to the Resurrection just as beauty points beyond itself to the Beatific Vision.

The coda to this examination of beauty offers two human exemplars of beauty—of perfect truth and goodness: Christ and the Virgin Mary, who is called the all-beautiful. Miravalle explains:

Miravalle offers a thorough look at the philosophical comprehension of beauty and its significance in the spiritual life. He also provides the reader with relevant sources for discerning and appreciating beauty and does so in a manageable volume. Miravalle’s work easily makes it onto the list of the best Catholic books published in the last year, let alone those dealing with aesthetics.

John Tuttle has written for The Hill, Culture Wars magazine, The Millions, Catholic Journal: Reflections on Faith & Culture, Franciscan Media, and the University of Notre Dame’s Grotto Network. He contributed a chapter to the book The Right to Believe (Vide Press 2020). He has also served as the prose editor for Loomings, the literary magazine of Benedictine College.