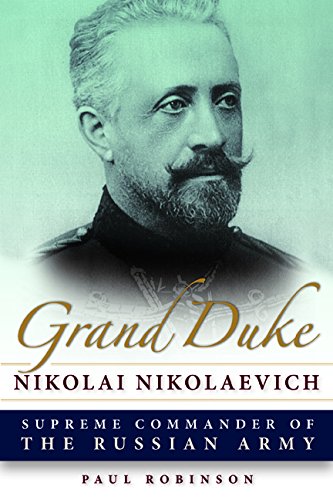 As I write these words it is, quite unintentionally, exactly one hundred years to the month since Tsar Nicholas II and his family were brutally murdered during the Russian Revolution. Perhaps the saddest and most tragic incident in the sad and tragic story of destruction of traditional order consequent upon the First World War, the annihilation of the senior line of the Romanovs is too well-known to need repeating. Too little known is the story of other branches of the same royal house, their role in the last years of imperial Russia, and their survival in exile.

Paul Robinson’s Grand Duke Nikolai Nikolaevich, Supreme Commander of the Russian Army fills what has otherwise been an enormous gap. Grandson of Tsar Nicholas I and first cousin of Nicholas II’s father, the subject of Professor Robinson’s book was one of the most important commanders of the Eastern and Middle Eastern fronts during the Great War and played perhaps the single greatest role in the background to the Russian Revolution of any Romanov outside the tsar’s nuclear family. Yet it is just the second biography ever written on the grand duke, the first in over seventy years, and the only one produced by a scholar rather than by one of Grand Duke Nikolai’s personal associates. It is also incredibly objective. While even those most sympathetic to ancien regime monarchies cannot refrain from serious criticisms of tsarist Russia, Professor Robinson demonstrates that it was by no means a decrepit façade sure to come crashing down in the face of “progress.” Reform may have been necessary for long-term viability. Revolution was not inevitable.

Born in 1856, Grand Duke Nikolai was a generation older than the last of the tsars and exemplified the characteristics of the “pure soldier.” A man of action without extensive interest in politics, the life of the mind, or higher cultural pursuits, brave and a natural leader of men, strongly principled if lacking a philosopher’s more sophisticated moral understanding, he would have been successful in his profession even if his royal birth had not assured a quick rise to its higher echelons—successful rather than distinguished. His major contribution to Russian arms in the late nineteenth and early twentieth century was modernization of the cavalry, a very real accomplishment which sounds paradoxical to contemporary ears. As Professor Robinson shows at length, horse cavalry was able to play an important role during the Great War on the Eastern Front and in the Middle East despite being quickly rendered obsolete in Western Europe. He might have added that a defining feature of modern warfare—use of the armored tank—is an adaptation to advanced technology of the principles that once guided the use of horse cavalry rather than a rejection of the mounted tradition. That one of history’s preeminent tank commanders, George S. Patton, Jr., should have started his career as a cavalryman is anything but coincidental, while even in the twenty-first century it has been necessary for American Special Forces in Afghanistan to operate from horseback.

Following the outbreak of war in 1914 Nikolai Nikolaevich first commanded Russian forces on the Eastern Front before being placed in charge of those in the Caucuses when Nicholas II took personal command in his country’s primary theater of war. The grand duke’s victories in the Middle East proved among the better conducted campaigns of World War I after his performance on the Eastern Front had left something to be desired. One of his most significant “failures” of that earlier period was, however, actually successful in its strategic objective of diverting German forces away from France and, in so doing, enabling the Allied Powers to achieve victory at the Battle of the Marne. Few generals in history can have been more willing to place the common cause of an alliance above their own country’s particular objective—and their own reputations.

What emerges is the picture of a military professional possessing the combination of competence and mediocrity found in most commanders in most wars regardless of the form of government under which their armies operate. A fair comparison might be to the majority of the men who held high command in the Army of the Potomac, men who would have performed creditably enough against opponents of ordinary caliber even though they were helpless against Robert E. Lee. Depictions of Russian commanders as abject blunderers is implicitly revealed by Robinson to be grounded not in fact but in ideological presuppositions that such leadership is inevitable in ancien regime monarchy.

Nikolai Nikolaevich’s preference for avoiding politics did not prevent him from taking part in public affairs when this was necessary in times of crisis. When reformist and revolutionary agitation threatened the Russian monarchy in 1905 the tsar offered to make his cousin a virtual military dictator, subject to little more than a royal dismissal, which might well have become itself politically impossible. Recognizing his own political limitations and those of the form of government Nicholas II was considering, the grand duke turned the proposal down, advocating steps towards a constitutional monarchy as offering the best possibility to assure lasting and stable government. Classical liberals in the elected duma insisted on steps that reduced the tsar, in practice if not in intent, to little more than a figurehead rather than a limited monarch. This led Nicholas II to eventually pull back from the compromise of 1905. Had traditionalists and classical liberals been able to form the sort of pragmatic working relationship that the grand duke favored it is likely that the monarchy would have been preserved and even the more moderate Menshevik socialists unable to gain power.

The role that Grand Duke Nikolai played in Tsar Nicholas’s fall might, however, be among the less creditable aspects of his life. Typically for a man of his profession, Nikolai Nikolaevich was intensely devoted to his country and its political tradition, showing more outward respect to his monarch than did most leading figures who lacked his royal status. His decision to pressure the tsar to abdicate, an action that was among the most significant in leading Nicholas to do so, was probably simple realism. He cannot, in any case, be held responsible for Nicholas’s decision to abdicate in favor of his brother, Grand Duke Mikhail Aleksandrovich, rather than of his son, Tsarevich Alexei Nikolaevich; discredit for this must go to the tsar. Grand Duke Mikhail’s refusal to accept the monarchy for himself was to be the immediate cause of its collapse. But in the months leading up to those events Nikolai Nikolaevich had entered into discussion with representatives of more conservative and classical liberal factions that had been considering forcible removal of Nicholas II from power, and his replacement by Grand Duke Nikolai if the coup succeeded. Some who took part in such plotting have alleged that the grand duke was aware of their intentions. Even if such allegations were incorrect he was still, at best, lacking in perception and stretching the limits of loyalty.

Escape from the power of the Bolsheviks and Nikolai Nikolaevich’s role in the early organization of exile opposition to them bring the biography to a conclusion.

Professor Robinson’s book stands well on its own as an account of a royal life and of important aspects of late tsarist Russian military history. But due to its subject’s disinclination to matters of a political nature it must be read in conjunction with other works by those who wish to have a more complete understanding of the relationship between the grand duke and the Russian Revolution. Though in most ways an excellent study it does not present more than the most essential facts of the political context of Nikolai Nikolaevich’s life.

James Baresel holds a Bachelor of Arts in history from the University of Cincinnati and a Master of Arts in philosophy from Franciscan University. He has taught classes in English, Latin, religion and the history of art.