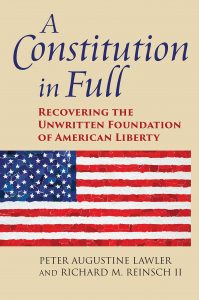 C. S. Lewis famously warned that “the devil tempts in twos.” We are prone to see the world through a simplistic lens, a false dichotomy of seemingly opposed choices that are really both in error (even if they are in error in different ways). This temptation is as old as the devil himself and it has characterized debates over the nature of American politics from the very founding of the first settlements in the American colonies to today’s bitter and polarized political struggle between progressives and conservatives.

A new book approaches the topic of American constitutionalism by explicitly rejecting the two alternatives available in contemporary politics. A Constitution in Full: Recovering the Unwritten Foundation of American Liberty by the late Peter Augustine Lawler and Richard M. Reinsch II is part of a growing scholarly movement that emphasizes the relational dimension of the American Constitution. This book advances three motifs that are common to post-war conservative writing: emphasis upon the “unwritten constitution,” resuscitation of a neglected thinker, and identifying a “third way.” All are splendidly executed.

Conservatives have long been concerned with the unwritten constitution that undergirds the much-revered written Constitution of 1787. Russell Kirk famously outlined the historical and cultural background of American constitutionalism in The Roots of American Order (1974) and America’s British Culture (1993). The concern Kirk addressed in these books is that the written Constitution is workable only insofar as it is rooted in the unwritten constitution, the cultural mores and humane habits of a people. This practice of appealing to the underlying character, the historical constitution of a people as the backdrop to the political institutions dates at least to Edmund Burke, who insisted against the abstractionism of the philosophes that a humane constitution in every country depended upon the historical experiences that shaped a people living together through the generations.

Something about neglected figures appeals deeply to the conservative mind. Kirk, again, was the master of this genre. His first book was John Randolph of Roanoke and the pages of The Conservative Mind are strewn with figures left by the wayside of modernity as they didn’t fit comfortably into the dominant narrative (later articulated by Louis Hartz) that the American tradition was fundamentally liberal. In a similar manner, Reinsch and Lawler appeal to a forgotten thinker, the nineteenth-century Roman Catholic Orestes Brownson (also a Kirk favorite), a brilliant iconoclast who confronted the crisis of his age, the Civil War, not by joining with one or the other ideological disputants in that conflict and absorbing their errors along the way, but by blazing his own path in an attempt to avoid pitfalls he saw on both sides. Brownson was an original thinker in the best sense of the term, identifying merit in the positions of both the abolitionists and their Southern opponents and trying to meld them together into an understanding of the American constitutional order that was humane and stable.

This brings us to our third motif, the middle way. Like Brownson, Reinsch and Lawler sketch out the false choice we face today between liberal egalitarians on the one hand and conservative individualists on the other, a dichotomy present from the founding of the first American colonies. Following Brownson, the authors locate the origins of these two erroneous views in Puritan Massachusetts and agrarian Virginia. There we find both the egalitarianism and collectivism of the dissenter religious colony in the North and the individual liberty of the Virginia planters in the South. These two extremes have characterized American political discourse for nearly four centuries, but, the authors contend, there are deeper, healthier streams in American history and thought from which we may draw.

We can begin with our own constitutional history. While the Founders may have been Lockean in their rhetorical devotion to individual rights, they acted as practical and wise statesmen in constructing a constitution that took account of how human beings actually lived in eighteenth-century America. They did not abolish the colonial governments, but nor did they leave them as they were. They established states to take the place of the colonies and state constitutions to take the place of the colonial charters. The national government did not obliterate the states, absorbing them into a centralized collective, nor did it merely form a compact between individual states. The founders forged a complex republic, one that recognized a sphere of autonomy for states and local governments, as well as a sphere of national power and prerogative. In such a way, the Constitution of 1787 was a work of practical genius, rooting the political institutions of the written constitution in the preexisting social reality of the unwritten constitution.

Essential to this founding genius was the recognition of the relational aspect of American life in the structures the Founders built or, rather, as the authors point out, preserved. The Constitution did not abolish the states. It preserved them in the constitution. The Constitution did not create space for religious free exercise. It preserved religious free exercise that already existed, protecting religious institutions and practices that had been present in the colonies from their founding in the seventeenth century.

In addition to this historical dimension to human relationality is the theoretical dimension. The founders were steeped in a society that took for granted Christian philosophical anthropology, which viewed every person as having duties to God that he or she must fulfil in conjunction with others. While we are free persons, we are relational in our freedom. This relationality is an essential feature of persons, the concrete beings we actually encounter in our everyday lives, the ones who actually cast votes, pay taxes, and write letters-to-the-editor. This person is neither the abstraction of the individualists nor the cog of the collectivists. For persons as relational beings, freedom is exercised in the context of a plethora of relationships that constitute the unwritten constitution.

The authors write, “A relational person exists with multiple dimensions: political, social, economic, and religious.” The relational person is embedded in family, country, religious organization, local neighborhood, voluntary associations, and the like. Any account of the person that ignores these aspects of her concrete existence is in grave error. This means that theories of the law and the constitution must recognize the essentially non-political realms of human existence, where human beings interact in ways that are not strictly political. To be meaningful, freedom from political intrusion into realms of economics, society, and religion is necessary for humane existence because human beings relate to each other in these spheres.

These plethora of relationships are where the rubber meets the road in self-government. We relate to each other through our institutions and associations and there govern ourselves in relation to each other. The states/colonies were preexisting political entities where the inhabitants had governed themselves. These entities were not ignored or trampled upon, but incorporated into the new constitutional order. The rights often heralded as individual were really the preservation of social spaces for relational practices of worship, assembly, speech, and the like.

A system of individual rights undermines this understanding of the relational nature of the person and the fundamentally social nature of the unwritten constitution. This is where a lot of conservatives go wrong and it is why the authors are critical of the Supreme Court’s incorporation of the Bill of Rights against the states. This move by the Court violated the logic of the Constitution, which preserved various spheres of autonomy, including that of the states, from federal interference. Furthermore, the Court used the concept of incorporation to increase its own power because the logic of incorporation made the judiciary the arbiter of the substantial content of rights as well as their application. All of this served to undermine the fundamentally relational nature of the unwritten constitution, one that is grounded in Christian philosophical anthropology of proper social relations.

The authors see this movement as leading to the privacy jurisprudence, which ignores the fundamentally sound relations between members of the traditional family. This line of jurisprudence is manifested most recently in Obergefell v. Hodges (2015). The authors spend an entire chapter dissecting the case, seeing in the thrust of the decision the reductio ad absurdum of the Court’s refusal to recognize the unwritten constitution and the relational person. In Obergefell the Court struck down all state laws that defined marriage between a man and a woman. Justice Kennedy, who wrote the majority opinion, indicated that liberty had no definite content, but could be defined by what was necessary in any given time. The liberty manifested in the right to same-sex marriage is Lockean to the core. While conservatives often complain about progressive collectivization undermining the constitutional order, the authors argue that actually conservative Lockeanism has won and the constitutional order is being undermined not by collectivization but by individualization. “[The Lockean] transformation was and is in the interest of liberating the individual from all biological, relational imperatives and to free consent for every aspect of our life.” The Court’s effort to individualize a social institution by defining it in terms of individual self-fulfillment rather than social obligation and responsibility required it to strike down marriage laws in many states, thus undermining the relational nature of state governments as well.

This book is an important contribution to a larger trend that brings attention to the relational dimensions of constitutional order, countering the distorting lenses provided by the modern iterations of Puritan collectivism and southern individualism. Reinsch has done us all a service by ushering to publication a fitting finale to the extraordinary career of Peter Augustine Lawler and in the process establishing himself as a serious constitutional thinker and—dare I say it?—heir to the seminal American political philosopher.

Luke C. Sheahan is assistant professor of political science at Duquesne University and a non-resident scholar at the Program for Research on Religion and Urban Civil Society at the University of Pennsylvania.