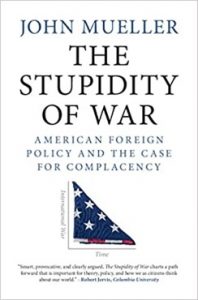 The Stupidity of War: American Foreign Policy and the Case for Complacency
by John Mueller.
Cambridge University Press, 2021.
Hardback, 342 pages, $28.

John Mueller, professor emeritus from the Ohio State University, has long questioned the key assumptions behind many U.S. foreign policy undertakings. In his analytic, witty, and highly readable The Stupidity of War, Mueller argues that many of our international security problems might be handled with a healthy dose of complacency, and in some cases—dare we say—even appeasement.

The Stupidity of War is a timely read while our collective psyche is still tender after our ignominious withdrawal from Afghanistan after twenty years of fruitless war. Those familiar with Professor Mueller’s work will recognize his arguments here from earlier works. As usual with a Mueller book, you will find yourself chuckling at his depiction of the misguided self-importance of our policymakers and experts, who, like overconfident drunk drivers, have us caroming from one foreign policy debacle to another.

As a corrective, Mueller believes that something of the old complacent wisdom of Calvin Coolidge is called for: if you see ten problems coming up the road, nine will fall into the ditch before they get to you.

At the highest level of policy, threat exaggeration remains our fail-safe position. During the Cold War we consistently overestimated threats, and this mindset has extended into the present. A point that Mueller makes here, as he did in Terror, Security, and Money, is that our government is terrible at calculating actual risk. Instead, as Mueller likes to say, at the highest levels senior policymakers seem more comfortable making decisions based on “simplicity and spook.”

Part of the problem perhaps derives from international relations writing itself, which tends to leave key terms vague or undefined. Experts speak of international “disorder,” and the need for the U.S. to exercise its “hegemony,” concepts that, in Mueller’s view, have gotten us into nothing but trouble since Vietnam. Mueller likewise takes issue with the frequent warnings that our era is somehow more complicated and fraught with danger than the Cold War era, which was nothing if not difficult.

Assessing the end of that turbulent period, Mueller published his seminal Retreat from Doomsday, arguing interstate war itself was becoming obsolete, and the key variable in this amazing development was mankind’s growing alienation from violence itself. Mueller identifies the key independent variable as human intentions; people and governments stopped considering war as a worthwhile pursuit. Later, the psychologist Steven Pinker would expand on this argument in his highly influential The Better Angels of Our Nature.

According to Mueller, the US and the USSR never fought not because of the threat of nuclear war, but simply because the Soviets never really wanted to; their immense suffering during World War II powerfully deterred them. The Cuban Missile Crisis therefore did not put the world on the brink; neither side wanted war. In this case, like it or not, appeasement by President Kennedy—granting important face-saving concessions to Premier Khrushchev—resolved the crisis. Appeasement has been a malodorous word since 1938, but realistically, that is how many potential conflicts are still resolved.

More contentiously, Mueller argues even Saddam Hussein in 1991 might have been receptive to a negotiated exit from Kuwait, which would have avoided the Gulf War and the subsequent problems involved with it, such as harsh sanctions, severe internal crackdowns, and Osama bin Laden’s motivation for 9/11, ten years later.

Mueller strongly criticizes the war on terrorism policy after 9/11. Our foreign policy establishment inflated the threat and indulged constantly in “worst-case” fantasies. Modest threats quickly became “existential.” As a senior CIA official noted in his memoir, after 9/11, threat reporting on potential new attacks deluged the agency. The intelligence community went from a “failure of imagination” before the fateful attack, to a hyperactive imagination afterwards. Wild predictions of dozens of Al Qaeda sleeper cells in the US became the basis for long-lasting policies.

Jihadist-inspired terrorism only took the lives of six Americans a year after the 9/11 attack. Certainly, a strong response was a must, but we might have taken a more “laid back approach” that didn’t involve two protracted wars costing trillions of dollars. Mueller reprises arguments from other works, including Chasing Ghosts: The Policing of Terrorism, that our domestic terrorism problem was exaggerated by aggressive FBI tactics.

Meanwhile, we stayed in Afghanistan long after the initial reason for entering, fearing that, somehow, Al Qaeda would reconstitute itself and launch new attacks from there. Al Qaeda, according to experts, is forever on the verge of “resurging.” Somehow, it never did. All the safe-haven theories on why we had to stay in Afghanistan seem to be proven wrong. Similarly, the terrorist threat of ISIS was highly exaggerated and defeated by a handful of US special forces, drone attacks, and local militias. But by the mid-2010s, most global terrorism was due to wars that we had started just to fight it.

Our response to unruly nation-state behavior gets similar skeptical treatment from Mueller. Mueller sees Russia essentially as defensive-minded (this was before its brutal and anachronistic Ukraine invasion), and China as a trading power with much to lose by going to war. For its part, Iran is bankrupt and its “antics” are not much of a threat. Our near-hysteria over its potentially acquiring nuclear weapons is hardly justified; after China and North Korea each built the bomb, we accepted the outcome and learned to live with it. Mueller’s descriptions of these adversaries and their ability to be assuaged by concessions are of course debatable and will doubtless provoke the charge of isolationism.

But Mueller is making no pacifist or isolationist argument. Some military interventions he deems to be truly necessary. The Korean War intervention, he argues, on balance was a benefit, as it saved an important ally for the United States and allowed for a prosperous and free South Korea. Few of our other wars of national policy have come close to being that successful. Also, he maintains that low-cost interventions and policing in other conflicts might have had beneficial effects, such a timely intervention in Rwanda to prevent genocide.

The Stupidity of War has a loftier goal than a mere critique; it attempts to establish an alternative vision for foreign policy principles based on a commitment to peace. In Mueller’s view, the realist tradition—the international order is anarchic and states are motivated by power—gets it wrong. Peace, in fact, is the premise of today’s international system, and our policies should be geared to preserve it. We should return to a Jeffersonian strategy of free trade and exchange of ideas and be mindful that, in preserving international order, “peace, easy taxes, and a tolerable administration of justice,” in Adam Smith’s phrase, remain worthy objects of our attention. We should downsize our military to something more “fit to purpose” that would effectively deter, rather than tempt our misguided policymakers. Mueller quotes approvingly the eminent strategist Bernard Brodie who said during the Vietnam era, “One way of keeping people out of trouble is to deny them the means for getting into it.”

Michael J. Ard, Ph.D is the program director for the Master of Science in Intelligence Analysis degree at Johns Hopkins University’s Advanced Academic Programs in Washington D.C. He was a 1996 ISI Richard M. Weaver fellow.