The World the Habsburgs Built 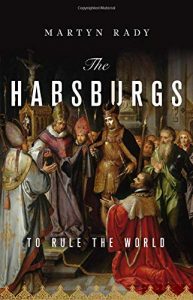 At their peak in the sixteenth century, they ruled much of the known world. A beacon of the true, universal Catholic faith to many, a source of sorrow and oppression to others, their famous and ambiguous acrostic slogan AEIOU serving to inform their great ambitions to forever expand the empire, expand universal knowledge, expand the faith.

Centuries later, their very existence precarious, they were protected by more powerful upstarts solely because their existence in the middle of a fractious Central Europe was the best option available. As one Czech nationalist noted later, if they did not exist, they would need to be invented. When their rule was finally and permanently ended, thinkers ranging from Stefan Zweig to Michael Oakeshott bemoaned the loss, believing that their continued existence, illogical and seemingly unjustifiable as it was, was still to be preferred to their end.

Alongside the Romanovs and the Bourbons, the Habsburg monarchical family can legitimately claim to have made and fashioned much of the world we know today. So what was the Habsburg secret?

In his new history of the Habsburgs, Professor Martyn Rady of University College London argues that it comes down to three things: luck, political acumen, and mythmaking.

Originally one of many noble houses under the Holy Roman Empire and far from the largest, the Habsburg family succeeded in first and foremost by outlasting their rivals and continually producing male heirs, a phenomenon Rady refers to as the “Fortinbras Effect.” Contrary to their later caricature as a bunch of stupid inbreds, the Habsburgs were also careful to marry effectively and strategically, always expanding and securing their holdings throughout Europe and broadening their influence.

Another skill the Habsburg line was known for to the very end was its skill in governing. While there were certainly exceptions and inconsistencies—which Rady notes both in passing and in detail, such as in its sporadic harsh treatment of Jews and later Protestants and other Christian “heretics”—the Habsburg rulers took what might be called a middle course between English-style formal division of power in the west and Russian patrimonial autocracy in the east. Formally, the Habsburg emperors never viewed their power as constrained by anyone and were very late in granting formal recognition to local governing bodies under their rule. Informally and in practice, the ever-expanding empire generally did not try to impose any sort of mass uniformity on their subjects—they were content with slow and gradual reforms and with allowing the different parts of their mosaic being unified in their person. Unlike in the modern era, the Habsburgs were at peace with a world full of contradictions.

The last side of the Habsburg’s triangle of success was mythmaking. This is the most interesting part of Rady’s study, a move away from nothing but drums-and-trumpets history or family intrigues towards an inquiry into how art, architecture, and ceremony helped to create its own reality in Habsburg lands. Beautiful palaces and artwork showed the majesty and reach of a kingdom striving in theory to encompass the whole world. Elaborate ceremonies and images of the Habsburgs could be found in the most farflung of the kingdom’s holdings. Austria itself, once a less-important part of the Habsburg patrimony, became a kind of ersatz “holy land” for the empire, “an idea as much as a space,” as Rady puts it.

The Habsburgs were of course by no means the only kingdom or empire in the Middle Ages or otherwise to work hard to create their own story. Indeed, it is impossible to understand this age and its events apart from the thick layer of myth, wonder, and mystery that enveloped it. But Rady pretty convincingly argues that they formed their own unique one. Alongside the usual invented ties to Rome and other ancient kingdoms, the Habsburgs also imbued their line with a sense of eternal mission.

This can be seen in the acrostic slogan AEIOU. While commonly interpreted to mean “Austria must rule the whole world,” it had and has other meanings. One such was the endless pursuit of all the knowledge on earth, leading to the creation of great libraries and even massive studies of the occult. It also meant the general encouragement of the arts from the top down, which would explain why Vienna continued to be one of the continent’s great cultural capitals long after the Habsburgs no longer ruled much of the globe.

But then their luck began to run out. It started with the male line ending among the Spanish Habsburgs—and with it their control of territory outside the continent of Europe. Other powers began to rise at their expense, especially revolutionary France and later Prussia and Bismarck’s Germany. But even then, the Habsburgs continued to be deeply involved in the world—sending out exploratory voyages, collecting more knowledge about the world (this time more scientifically), even being involved in the African slave trade with their merchant ships.

Whether he intended it or not, Rady’s book implicitly makes the case that the Habsburg’s fall can be traced to Europe’s transition from a world of faith and mystery to a world of almost obsessive rationalism (even if faith continued to exist and even flourish). The empire that had so successfully weathered storms from civil war, religious strife, and perilous conflict with Islamic powers, ultimately destroyed its own rationale.

Starting from Joseph II and continuing until the Empire’s end, the Emperor and especially his civil servants relentlessly drove a project aimed at categorizing and perfectly defining everything under their rule so it could be more easily managed. Some of this was certainly to the good—equality of the law, increased education, fairer treatment of all subjects came of this Enlightenment-driven mission. But there were serious downsides. For starters, the Habsburg officials so disdained any work that did not conform to their standards of rationality that when they went around collecting manuscripts from “useless” monasteries, “about two and a half million books were destroyed in Europe’s greatest biblioclasm before the Third Reich.”

Nor was that all. In the Middle Ages, and especially in ethnically mixed Eastern Europe, identities were mixed and merged, with many simply originating “from here” or from a region rather than a country or broader people. The rise of national identity led to an obsessive—and official—categorizing of people who had never much bothered with the question, as perfectly belonging to this or that nation or ethnic group.

The old Habsburg genius for understanding the importance of mystery, of letting things work out as they had before even if it doesn’t make much sense, was being undermined by its own hand. Zweig and Oakeshott may rightly complain about how the Empire deserved to live simply because it was there and because why not, but the truth is that the family itself had surrendered to an ideology that refused to accept the existence of anything that couldn’t justify itself by “scientific” standards. Born and made great by the language of myth and mystery, the Habsburg dynasty’s efforts to accommodate itself to the age ended up destroying its reason for being.

There is much more on the subject in Rady’s book, which I’m sure will be discussed at length. I was disappointed at the paucity of pictures of the majestic buildings and works he described, and I would have liked to have known more—if more could be known—of the attitude of the peasants and farmers, the majority of the kingdom and later empire’s population, towards the monarchy. The ending chapter with its rants on the EU and Orbán strike me as undercutting an otherwise great work.

But all in all, this book is an excellent introduction to the Habsburgs and their era, and a thought-provoking study on what was lost and gained when humanity decided it could no longer tolerate the idea of leaving things be or letting them make sense on their own terms.

Avi Woolf is an editor and translator residing in Israel. He tweets at AviWoolf.