Thebes Gets Its Due 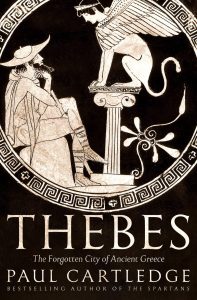 Paul Cartledge makes a compelling case for the centrality of the often “forgotten” city of Thebes to the story of Ancient Greece. Less heralded than Athens or Sparta, sometimes confused with the Thebes in Pharaoh’s Egypt, and belittled then and now as a backwater by Levantine sophisticates, Thebes is known to many primarily for siding with the Persians in 480 BC against the other Greek city-states. In Cartledge’s account of the Boeotian city, Thebes finally gets its five-millennia worth of due in this clearly and concisely written tome.

Thebes is the latest scholarly contribution by emeritus Cambridge historian Cartledge, who already has a shelf’s worth of illustrious volumes on Ancient Greece to his name. His previous books have covered more well-known topics such as Alexander the Great, the Battle of Thermopylae, and Sparta. It is a pleasure to see Cartledge using his powers to win over readers to the idea of Thebes’s enduring cultural significance. The significance of Thebes to students of the western canon should be obvious but, after a look at the brief bibliography of scholarship on the city of Cadmus featured in the back of this book, there seems to have been surprisingly little written about the city by recent scholars.

Cartledge’s new book is simultaneously a greatest-hits album for the city and a historically situated, blow-by-blow of change and continuity within the citadel of Cadmus. Thebes is the “City of Myth”—founded by Cadmus and thereafter the mythical home of Oedipus, Heracles, and Dionysus. Legend has it that the Greek alphabet is a gift from Thebes’s founder—“the Cadmean letters.”

Thebes’s recorded history is rendered in just as distinguished fashion as its mythological one. The city had a long independent streak, willing to assert its political and economic interests within the Eastern Mediterranean. Certainly, Thebes earned a reputation for wickedness among its Hellenic peers for allying with Persia and doing consistently awful things to their neighbors. But Thebes held its own in some awfully hostile territory throughout the fourth and fifth centuries BC. Ever so briefly, Thebes asserted itself as the regional power under the leadership of Epaminondas, shattering Spartan dominance at the Battle of Leuctra in 371 BC. Following a brief period of hegemony, Thebes itself was overrun and destroyed by Alexander the Great’s army. Thebes rose again in the aftermath of Alexander but never to the heights of its glory.

While Thebes lacked the aesthetic achievements of some of its Hellenic peers, this in no way prevented the city and its history from serving as a durable source of inspiration for Western arts and letters. In the book’s final chapter, Cartledge speaks to what he calls the recurring “mythic revivals” of the city. Thebes and its denizens, real or imagined, figure in the works of Chaucer, Shakespeare, and Dryden. Thebans served as the inspiration for classical painting and, for better or worse, provided Sigmund Freud with a narrative device for his famed “Oedipus complex.”

In addition to being an engaging account of Cadmea and its descendants, Thebes: The Forgotten City of Ancient Greece is also an excellent resource for students of antiquity. The extensive historical timeline of Thebes and its environs at the beginning of the book is a helpful point of reference while reading, and the book concludes with a succinct survey of the academic literature on Thebes. I wish more authors and publishers to include such reference tools at the beginning and end of their books. Cartledge’s new book will make a lithe contribution to your classics library.

Clayton Trutor holds a PhD in history from Boston College and teaches at Norwich University in Northfield, Vermont. He’d love to hear from you on Twitter: @ClaytonTrutor