Theodore Roosevelt and Statecraft for a World Power 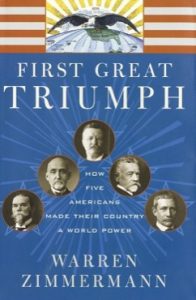 Teddy Roosevelt was a man so vast he contained multitudes. For progressives, the twenty-sixth president’s crusade against monopolies blazed a path now common among the economic left. For the new right, Roosevelt is a man who both lived and acted out a brand of American conservatism which valued a muscular nationalism and empowering workers.

The latter treatment of the man has become especially prominent in recent years, so far as to inspire a biography of Roosevelt from Senator Josh Hawley that discusses the president’s faith and its application to his vigorous domestic policy. Younger conservatives disaffected by the current governing agenda of the Republican Party and its associated institutions have taken to using Roosevelt as an avatar for the kind of break they see as needed with the GOP’s current direction.

Both understandings of Roosevelt contain some elements of persuasive argument. Indeed, conservative populists are right: Roosevelt himself was of elite stock, but made no bones about chastising the excesses of his fellow elites who had deployed some degree of a vice grip on American political and economic life. He even went as far as to challenge his old party in the 1912 presidential election, charging that the Republican political machine had lost its moorings by catering to a decadent business class rather than main street. Over four million Americans agreed.

Progressives would point to Roosevelt’s intense passion for bettering the conditions of the lower class—his famous friendship with muckraking photographer Jacob Riis demonstrated his sensitivity to urban blight.

Neither reading of Roosevelt, however, can fully grasp the full scope of a man so large in both deed and thought without devoting serious attention to the milieu where Roosevelt’s intellectual and political legacy perhaps is the most enduring but also most necessary to look to in the current moment: Theodore Roosevelt’s statecraft.

Though now nearly two decades old, former diplomat Warren Zimmerman’s 2002 work First Great Triumph: How Five Americans Made Their Country a World Power is well worth reconsideration. It tracks the intertwined lives and ideas of Roosevelt and a coterie of his friends and advisers: among them naval strategist Alfred T. Mahan, Henry Cabot Lodge, Secretary of State John Hay, and Elihu Root. The combination of their ideas and dynamism, Zimmerman argues, laid the foundations upon which the American century was built. The book also invites robust instruction in our current moment about the uses and limitations of a Rooseveltian political ethos.

History shows that the strength of America and its ability to confront the illiberal forces of the world are deeply contingent on civil society at large and the country’s domestic confidence. This is the original position from which at least one intellectual tradition in American foreign policy—beginning in the political and strategic thought of Alexander Hamilton—began, and where Roosevelt picked up.

Statecraft is an exercise that takes into account prudential and political considerations as a nation develops its foreign policy. Specifically, it is the practice of arranging the advancement of national interests abroad while taking into account domestic political tendencies. The Roosevelt administration’s foreign policy, the “large policy” as advisers would call it, represented a major break from a tradition of defensive realism that pervaded American politics in the wake of the Civil War by pursuing statecraft with a more outward-looking approach.

The large policy emphasized a herculean military buildup capped off with the “Great White Fleet,” an effort to revitalize America’s navy. The policy also demanded decisive action to pursue American national interests in Latin America as well as the Pacific. Roosevelt and his team of statesmen saw a geopolitical opening for America’s emergence as a world power, and seized the opportunity in any respect they could.

Despite a penchant for war ascendant in the administration—Roosevelt’s Secretary of State John Hay once called the Spanish-American War a “splendid little war”—Roosevelt actually used “gunboat diplomacy” and other muscular means to deter extended conflict. Under Roosevelt’s energetic if not always steady hand, Washington forged a historic peace between warring Russia and Japan. The agreement, ironically, led to one of America’s leading martial presidents being awarded a Nobel Peace Prize.

Roosevelt’s ambitious strategic outlook came during a deeply unstable time in American political life. An abridged reconstruction led to heightened racial tensions in the deep south, while influxes of immigrants begot spikes in reactionary nativism. Additionally, rapid advancements in technology and the onset of modernism led some to worry about the virility and virtue of the American people. Neurasthenia, a psychological condition characterized by stress, paranoia, and uncertainty that exemplified the period’s restlessness, reached heights in its discussion during the late nineteenth century.

Yet Roosevelt’s same global outlook bucked a domestic political scene where few signs pointed to its popularity. Now, foreign policy tied to an aggressive advancement of American interests is largely considered an elite phenomenon. This is in no small part due to the mismanagement of conflict in the Middle East, and the increasing gulf between public opinion and strategy. That was not always the case. Roosevelt and the majority of his core advisers saw themselves as men of the people, and enjoyed resounding popular support for their hawkish tendencies.

Zimmerman points out that beyond Roosevelt, several of the president’s men believed they spoke for the vox populi, and took a vested interest in the issues of the working class. A man of letters, John Hay wrote several canons of poetry extolling the virtues of the common citizen. His 1883 novel, The Bread-Winners: A Social Study, offers a stinging social commentary on the self-serving nature of the new upper class (though it also was starkly anti-organized labor). Secretary of War Elihu Root was animated by the avarice he saw that ran through the New York Republican political machine, taking a reformist anti-cronyism agenda to Albany in his younger years. Even Harvard graduate and Massachusetts blue blood Henry Cabot Lodge often waxed philosophical about the virtues of Irish-American fishermen in his home state.

For Roosevelt and his advisers, an intimate connection manifested between an energetic pursuit of American interests abroad and a well-functioning regime at home. The Bull Moose was deeply schooled in and confident about American principles, and in many ways saw campaigns for freedom abroad as a necessary precondition to fulfill what he called America’s “high purpose,” or the national destiny in the world. The president’s 1899 speech, “The Strenuous Life,” discusses this notion at length.

“Our country calls not for the life of ease but for the life of strenuous endeavor,” said Roosevelt. “We cannot sit huddled within our own borders and avow ourselves merely an assemblage of well-to-do hucksters who care nothing for what happens beyond. Such a policy would defeat even its own end; for as the nations grow to have ever wider and wider interests, and are brought into closer and closer contact, if we are to hold our own in the struggle for naval and commercial supremacy, we must build up our power without our own borders.”

The sources of such sentiment and conduct are diverse, and some are closer to abhorrent than admirable. Roosevelt’s views on race and culture influenced his statecraft, which manifest most evidently in his study of the American west, a book-length study that leans heavily on Frederick Jackson Turner’s famous “frontier thesis.” These views were in lockstep with many of his contemporaries, and also displayed the president’s lifelong romance and fascination with social Darwinism as well as its associated eugenic agenda.

As Zimmerman also notes, Roosevelt’s statecraft could be deeply personal and psychological—his often overly hawkish disposition was partially due to his own sense that he had to compensate for his father’s lack of service in the Civil War.

Above all other factors though, Roosevelt’s highest loyalty was to small-r republican government, human dignity, and to advance a political tradition ideated by Hamilton and modified by Clay, Lincoln, and others that advocated an energetic and powerful central government able to protect both America’s foreign interests and expand the country’s industrial base. In short, it is a policy for a world power.

It is exactly this tradition of statecraft in which Roosevelt innovated that policymakers would do well to rediscover in an era where democracy backslides worldwide and a superpower rises in the Pacific. The American cause as it portends to the China challenge faces a limiting principle: Americans themselves may not be willing to bear the costs of a twilight struggle.

The cultural torpor, lack of social cohesion, and opprobrium at the thought of another “endless war” leave Americans restless, and offer Beijing opportunities for exploitation. A true whole-of-government, even a whole-of-society approach, is needed for America to meet the moment. As Roosevelt’s friend and confidant Alfred Thayer Mahan would put it: to solve our problems inward, America ought to look outward.

In some ways, the political right and the previous administration recovered elements of this strategic thought. Former Secretary of State Mike Pompeo often talked about the necessity of strong domestic foundations for America’s answer to the China challenge. Secretary of Defense Mark Esper quoted Mahan, a naval strategist whose thought inspired Roosevelt’s nearly imperial fleet in a speech outlining his own vision for the future of the American navy. Before either of them, the late Senator John McCain spoke often about how Roosevelt’s active foreign policy and savvy statecraft inspired his own strategic thought. The Weekly Standard devoted a spate of articles to Roosevelt and “national greatness conservatism” during the 1990s.

At present, the grounds of public opinion do not appear to prove fertile for this intellectual project. It is unclear that Americans are willing to meet the challenge China poses with the requisite force. A sensibility inclined to “blame America first” is ascendant on the left, and the horrors of the health and economic effects of the coronavirus are already perceived by many as limiting America’s willingness to take an active approach on the global stage.

To beckon the spirit of Rooseveltian statecraft seems needed now more than ever given America’s strategic and cultural position. The world very well may be in a period of transition in order, not dissimilar to the transition where Roosevelt’s prudence and energy helped America lead the way. If Washington’s strategists and planners wish to lead in the world again with the citizenry behind it, they might find a kindred spirit in Roosevelt. Zimmerman’s delicate but attentive sense of that spirit makes this book a necessary reconsideration.

Jack Beyrer is a news writer for the Washington Free Beacon, where he covers foreign policy and national security matters. “Reconsiderations” is an occasional series of University Bookman reviews aimed at considering afresh older books for contemporary times.