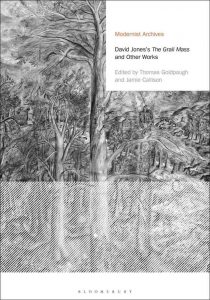 David Jones (1895–1974) opens his modern epic, The Anathemata (1952), by quoting the Historia Brittonum: “I have made a heap of all that I could find.” Yet The Anathemata was itself but a “fragment” of Jones’s poetic attempt to unify a vast array of cultural materia. He commenced this project in 1936 and it was near completion by 1962. Jones (and posthumous editors), however, decided instead to extract additional excerpts and publish them separately, principally in The Sleeping Lord (1974) and The Roman Quarry (1981). The Grail Mass restores many of those pieces to their original context while integrating them with a previously unpublished substantial segment, “On the Traverse of the Wall.” In so fusing these “wodges of stuff” into a coherent, discrete text, plus presenting newly edited versions of related works, Goldpaugh and Callison offer a significant addition to the Jones canon that displays key themes of his thought. In particular, this poetry reveals an innovative cultural critique of imperialism and its ramifications that participates in Jones’s broader Catholic appraisal of technocracy.

The Grail Mass begins as an artistic rendition of theologian Maurice de la Taille’s thesis of a seamless connection between the Last Supper, the Crucifixion, and their “unbloody” re-presentation in the Mass. Jones concentrates especially on the figures of Judas and Caiaphas, depicting them as Oswald Spengler’s “men of fact” who are driven by purely pragmatic and utilitarian calculations. As the poem’s point of view then shifts to that of Roman soldiers stationed in Jerusalem during Christ’s Passion, its dominant thematic focus becomes the nature of modern imperialism and its consequences, as (again echoing Spengler) the Roman Empire was a constant imaginative proxy in Jones’s oeuvre for the British Empire of “these global days.” In fact, Jones felt that this dimension of the verse seemed “more ‘contemporary’” as the twentieth century progressed, and Goldpaugh and Callison even dub The Grail Mass a “post-colonial” text.

Jones’s consistent opposition to modern imperialism arose from fears that it was based on many of his age’s worst aspects and posed a potentially fatal threat to local virtues and pastoral cultures. Already in 1939, he condemned the British society he thought built on external expansion and exploitation: “this ‘emancipated’ world of ours has been historically made possible by acts of brutality and aggression, the destruction of cultures, the infliction of wrong.” Accordingly, he frequently paraphrased Augustine of Hippo and equated empire with robbery while eventually taking a jaded view of the Commonwealth: rather than considering it a model of post-colonial cooperation, Jones regarded this arrangement as imperialism by other means:

this organized deception whereby we make an emporium
and call it a Commonwealth.
…
(I can’t believe they all believe the bunk about
Dominion status—honestly.)

Besides uttering these more targeted complaints about imperialism, Jones deemed it a manifestation of a technocratic ethic. He held that the industrial era was governed by “the utile,” which valorized functional efficiency at the expense of what he judged the defining human traits of “gratuitous” craftsmanship and sacrament, and devalued speculative wisdom. He cast imperial rulers as such Spenglerian fact-men, “concerned not with metaphysical conceptions but with the ordering of a protectorate,” who seek this goal through a single-minded pursuit of efficiency. Those they command are “fixed single-eyed on one immediate mark,” and they

keep
the walls of the world
sector by sub-sector
maniple by maniple
man by man.

He considered the “unific and expanding order” served by this carefully divided labor a secularist sublimation of the Church’s missionary character. The imperialist may parrot Christ’s hope “that all may be one in us,” Jones contended, but “a ruthless, this-world domination” is a decayed distortion of that dream:

Do the celestial forechoosings
and the hard journeyings
come to this?
…
did they parcel out
per scamna et strigas
the civitas of God
that we should sprawl
from Septimontium
a megalopolis that wills death?

It was modern imperialism’s lethal implications for local peculiarities that made it especially disturbing to Jones. He felt that gratuitous art and sacrament were best expressed and preserved by sensitivity to distinct, defined localities: “the forms where man normally and historically most commonly conjoined matter and spirit … have borne the stamp of locality.” He thus argued that the “numina of localities and differentiated traditions” have dictated the evolution of all arts, and that sacrament is likewise rooted in the local, as priests re-present Christ “under forms indelibly marked by locale and incidence.” To Jones, therefore, Roman Catholicism commits its adherents “to locality.” Finally, he feared that broader cultural traditions would also be forsaken without that commitment, asserting a “whole tie-up of very ancient duration with site and locality.”

Jones thought imperialism threatened to rob cultures of these core principles. He saw it as a homogenizing ideology whose advocates contemn local differences and limits. In his portrayals, imperial fact-men subjugate colonies to a monochromatic way of life ruthlessly, as they transgress national borders to pursue world unity without variety:

It’s the world-bounds
we’re detailed to beat
to discipline the world-floor
to a common level
till everything presuming difference
and all the sweet remembered demarcations
wither
to the touch of us
and know the fact of empire.

In such a regime, Jones concluded, art, sacrament, and tradition are all endangered. The “antique song from known-site” is to be left to those

who beat the bounds
of small localities
all that’s done with
for the likes of us
in Urbs, throughout orbis.

bumpkin sacraments
are for the young-time
for the dream-watches
now we serve contemporary fact.

Even the imperialists’ own traditions, “the remembered things of origin,” must be forgotten, so that such memories do not inhibit the destruction of others’ heritages:

[we] must think
no more of our dear sites or brews of this dear pagus, or that known
enclosure loved of Pales, lest, thinking of our own, our bowels
turn when we are commanded to storm the palisades of others and
the world-plan be undone by plebeian pity.

Jones connected the purported imperialist desire for cultural uniformity with other representatives of the utile. In particular, he saw industrialism and imperialism as allies. To him, the “stream-lined sensibility” of “modern industrialized techniques” had unleashed a “cold douche” on “all the old locality-traditions,” and imperialism carries this stunting chill to previously verdant and vital societies:

Do we but organize the extension of death whose organisms
withered with the old economies behind the living fences of the
small localities?

Jones maintained that it is localities with ancestral economies grounded in pre-industrial, pastoral norms whose survival is most imperiled by the imperial transmission of industry and its attendant urbanism. Directors of imperial toil are “all for giving Dame Nature one in the pants” as they

enclose
with each directing chit a root of Saturn’s Loathing, special
spined, for every jack man in Urbs, throughout orbis.

Even with postwar decolonization, Jones felt, this violent, potentially deadly challenge to locality, and all it symbolized, by homogenizing, industrialized, expansionist fact-men remained ubiquitous. As he put it in 1959, “our technocracy tends in all lands to be at odds with the older locality-patterns.” He hence satirized what he deemed the meddling, patronizing mentality behind assimilationist ideas, referring to “cultures we liquidate for the good of the liquidated.” He also depicted more insidious efforts to destroy peripheral areas’ autonomy by gradually creating economic dependence on the metropolis:

I wouldn’t be hard on ’em—after the steel comes the
softer wares, indeed before, to soft ’em up a bit to make
the steel’s work more certain—corrupt their economies
before we break their wills­—that’s already under way—
the peaceful penetration’s doing well, there are some who
say.

Jones therefore voiced a precocious eco-critical view of imperialism as an agent of a totalizing industrialism that ravages organic orders.

But (unlike Spengler) Jones did not consider the hegemony of this irreligious “megalopolis” a harbinger of the dying of the West to be accepted fatalistically. Evincing his “optimism of the saints” and yearning for authentic unity, he insisted that an empire was “not meant to be bad in itself”: comparing it to the Passion narrative’s “bad” thief, Jones argued that even this “truculent robber … somehow or other he is ‘redeemed’ too!” In the poet’s mind, that salvation arose from establishing the variety in unity he discerned in Roman Catholicism. He held that the Church can articulate universal truths in each culture’s idiom without violating that community’s integrity: a priest’s prayers are

in accord with the intentions
of all peoples
but are offered
according to the disciplina
of this peculiar people.

Hence, Jones suggested, in a Catholic international order, there is no “need [that] peculiar powers forgo their stalls,” for Jesus is “lord of each locality.”

Further reflecting that cosmic optimism, Jones’s Catholicism enabled him to derive hope from seeing Roman times as a mirror of his era. He posited that as Rome’s collapse had been the womb from which Christendom had sprung, so Britain’s imperial sunset could be the dawn of a new Christian day. While he admitted that such a prospect faced unique obstacles in an increasingly utile age, he still refused to regard his analogy as false. After describing Christianity’s rise in the final Roman years and its growth to its Gothic height in The Anathemata, he ponders its possible present-day revival and contests the claim that his own “post-imperial, post-colonial epoch” is irreversibly post-Christian:

Not ever again?
never?
After the conflagrations
in the times of forgetting?
in the loops between?
before the prides
and after the happy falls?

If Rome stood for empire’s excesses in Jones’s outlook, then, its role as Christendom’s midwife helped redeem this truculent robber, making it both “ravager of folds, redeemed and fold-keeper.”

For David Jones, the global days of imperialism and neo-colonialism were part of “the December of our culture.” The worldwide spread of the machine age’s utilitarian technocracy appeared to jeopardize the signature human activities of art and sacrament and the local, traditional, pastoral cultures that nurtured them. Yet Jones also believed that it was in another December, in a province of imperial Rome, in the days of Caesar Augustus, that the Light of the World was born. His faith-filled hope, then, was that that kindly light would continue to lead men on, even amid the encircling gloom of “megalopolitan time.”

cold is wind
grey is rain, but
BRIGHT IS CANDELA.

Adam Schwartz is author of The Third Spring: G. K. Chesterton, Graham Greene, Christopher Dawson, and David Jones (The Catholic University of America Press, 2005). A professor of history at Christendom College, he serves on the advisory board of the David Jones Research Center.