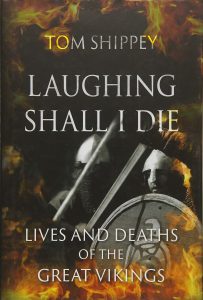 Laughing Shall I Die: Lives and Deaths of the Great Vikings
by Tom Shippey.
Reaktion Books, 2018.
Hardcover, 368 pages, $30.

It is a mark of our Age of Sensitivity that scholars have tried to turn the murderous Vikings into hygge-loving Scandinavian traders (with no trigger warning for those who don’t care for revisionist history). It is an approach that has no currency with Tom Shippey. Shippey is Professor Emeritus at Saint Louis University, Tolkien scholar, and worthy guide in all things fantasy and science fiction. He gives us a remarkable account of the robbers and raiders that bear more resemblance to a medieval biker gang than to maritime merchants. And for those of us that still go in for a good bit of that old-time masculinity, Shippey enthralls.

Shippey aims to get beyond the pat answers and sanitizing scholarship regnant in Viking studies in recent years, a trend which says more about our age than theirs. He wants to understand something of the Viking mind, the things that made them tick. He therefore does not limit himself to the historical record (unsurprisingly spotty and inconsistent) or the archaeological record (telling us the what, rarely the why). In Laughing Shall I Die, unlike other recent efforts, Shippey looks to Viking literature to fill in the gaps. Despite the obvious pitfalls of this approach, he gets us as close as we are likely to come to who these people were and how they were able to remain a fearsome presence in the world for nearly three centuries.

The name Viking (from Old Norse víkingr, marauder or pirate), according to Shippey, was not an ethnicity—Vikings strictly speaking were Scandinavian—but as he says, “a job description.” Raiding, looting, raping, and killing summed up the requirements. Especially killing. In dealing out death the Vikings were superlative. If Danes or Norwegians were farmers or fisherman rather than warriors and pillagers, then they were not Vikings. This distinction is quite useful particularly at the various intersections of literature and history in Denmark, Norway, Sweden, and England during the Viking Age (roughly 793 to 1066 A.D.).

The trajectory of Viking history is familiar. Sacking monasteries and raiding towns and villages across Western Europe eventually gave way to permanent settlements and continued migrations. A similar path in the East was followed by their Swedish cousins (the “Rus”) who established themselves in Kiev and as far as Constantinople. It is true that they were involved in the buying and selling of goods and the slave trade (for which Muslim lands in particular had a seemingly endless desire). But for many decades following the sack of Lindisfarne in 793, the Vikings raided, raped, burned, and left. The “fury of the Northmen” left the Anglo-Saxon chronicler repairing to God, the only power that seemingly could stop them.

By 1066, the good times were over. Defeated—as at Clontarf and Stamford Bridge—or assimilated—as in Normandy—the Vikings dissipated. And with them the mindset and spirit of the age. But something of their vicious energy was captured in the various literary forms that survived. Skaldic verse, the oldest form, dates to the early ninth century. It is poetically complex and involves the glorious actions of kings and nobles. Skaldic poems are generally contemporaneous with events recorded. Eddic verse (comprising the Poetic or Elder Edda), by comparison, was simple and dealt mostly with Norse legends and heroes. Both served as an inspiration to later skalds (poets) and saga writers.

This would not have been possible without Snorri Sturluson, the famous Icelandic poet and parliamentary lawspeaker (in Iceland’s hoary Althing). In an astonishing act of historic preservation in the early thirteenth century, Snorri compiled the Prose Edda (or Younger Edda). Snorri’s Edda is largely a manual that helped contemporary poets and writers understand the mechanics of older skaldic verse and the often obscure meanings embedded in it. Further, it gave cultural depth to later Norse sagas of kings, bishops, Icelanders, and saints.

Shippey excels in discussing the nuances and complexities of Viking literature. While some familiarity with the Eddas and sagas, as with Norse history, is recommended, it isn’t entirely necessary since much of what he teases out will send even the experienced reader back to the original texts. He is also superb at weaving in Scandinavian history and politics to better understand the literature. This is no easy task when one adds up all the Haralds, Olafs, and Sigurds. Nor is it easy given the mashup of peoples in the North. The Irish, Britons, Anglo-Saxons, Danes, Scots, and Norwegians did not keep to themselves. Instead, they rather inconveniently mixed and mingled with no thought for people centuries later who want to sort them out.

For all that, and in view of the other merits of the book (there are many), Shippey is at his entertaining best in combing the archaeological scraps and literary sources for what made the Viking mind distinctive. The central feature of the Viking mind centered on death. Shippey considers them something of a death cult. “It wasn’t,” he says, “contempt for death so much as acceptance that death was part of the deal.” And certainly what most know about Vikings—whether from Bernard Cornwell novels or the television series Vikings—is their all-consuming desire to die in battle.

Battle death earned a warrior a place at the table in Valhalla, to await Ragnarök with Odin and fight the final losing battle at his side. So all that ultimately awaited a Viking warrior was death and defeat. As religious beliefs go, this isn’t much of a sell. To the Viking mind though, Shippey says it is the “refusal to give in” that is important because “only in ultimate defeat can you show what you’re made of.” Defeat did not matter. Remaining undaunted did.

Shippey further argues that “the motive for Viking stoicism is not religious belief but pride, and a belief system in which the greatest virtue is self-control.” Fearlessness, another consistent aspect of the Viking mind, was an extension of self-control. If a warrior was afraid (or nervous, sad, or angry), he exercised restraint so as not to show weakness. Involuntary manifestations of emotions (turning red with anger) were permitted and, if stifled, accrued to the honor of the warrior.

Drengskapr, a Viking honor code of sorts, governed interactions and carried the weight of custom. If a man acted outside of it, he risked alienation or dishonorable death. Consequently, it gave rise to oblique patterns of negotiation and conversation. The Vikings, unsurprisingly, were masters of subtext, often wrapping insults in ambiguous statements. They also had a flair for the throwaway line. This was a pithy statement, often vague and containing a veiled threat, offered by one facing imminent (and usually excruciating) death. It was an outward expression of indirect defiance that, when decoded, steals the last laugh.

The Vikings’ obsession with death did nothing to dampen their laughter. Dark humor it was, adorned with ironic wit, but humor nonetheless. It is what makes the sagas and skalds worth reading. It is this, often more than great deeds, which makes a Viking heroic. Perhaps the most famous expression, at least in literature, is Ragnar’s Death Song:

The gods will invite me in,
In death there is no sighing …
The hours of life have passed,
Laughing shall I die.

It is easy to see why talk of trading and traveling diminishes our understanding of the Vikings. We don’t remember them for their buying and selling. We remember them for their strangeness and admirable fearlessness in the face of death. They were possessed of “a spirit which is like no other on earth.” We shall not see their kind again, nor are we likely have a book that helps us see them so well.

Timothy D. Lusch is a writer. He has appeared in Michigan History Magazine, Catholic World Report, Chronicles, The Federalist, Toronto Star, and many other publications.