Thought Is a Labyrinth 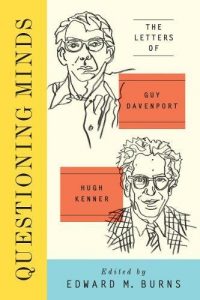 Culture is, among other things, a conspiracy of the like-minded. “The idea is to accumulate a Vortex,” writes Professor Kenner, of Santa Barbara College, to Mr. Guy Davenport, grad student, early in this collection. It is 1958. Kenner (1923–2003) has by this point written, while still a grad student, The Poetry of Ezra Pound (1951), followed by Wyndham Lewis (1954), pioneering examinations of not-yet-canonical modernists. Guy Davenport (1927–2005), who will go on to write some of the most beguiling (if occasionally disturbing) American fiction and essays of the 1970s and 1980s, has at this point written a handful of papers. One assumes that by “Vortex” Kenner means what Ezra Pound meant, in the essay that gave the name to the short-lived Vorticist movement: “a radiant node or cluster … from which, and through which, and into which, ideas are constantly rushing.” He also means that he wants to give Davenport a job. (One thinks of the other famous definition of Vorticism, Lewis’s, less impressive but more practical: “Vorticism, in fact, was what I, personally, did and said, at a certain period.”)

Questioning Minds gives readers the documentary remains of a friendship between two of the most interesting men, and finest English stylists, of the second half of the twentieth century. It offers a Master’s in literature in two volumes, or, if you read the footnotes, a Ph.D. It brims with drafts, translations, learned queries, disquisitions on Greek meter, Babbage, Beckett, Ruskin, the Modernists, Fourier transformations, the tying of knots. (Davenport: “I find that real knowledge of particulars comes from the curiosity born of infatuation.”) But it is also—like Kenner’s ironically titled masterpiece The Pound Era (1971)—a story of missed connections and frustrated effusiveness, a vortex barely discerned before it sputters out. And it educates the reader, as well, in the limits, moral and intellectual, of these two great minds.

The mood of the early letters is joyous, collaborative. They are like men who have jointly conceived some tremendous and endlessly expandable private joke and can rely only upon each other to keep the thing oxygenated and nourished. The reader rejoices to watch them discover in tandem Tolkien, Borges, Brakhage, Russian Futurism, the poets Ronald Johnson and Jonathan Williams and Robert Kelley (the latter always described with reference to his weight). Davenport seems to use the letters as a chance to perfect the collage style of his stories and essays: luminous details juxtaposed sentence-by-sentence, like panels of an altarpiece, and it is he who provides Kenner with the immortal final sentence of The Pound Era: “Thought is a labyrinth.”

They stumble together onto the premise of Kenner’s The Counterfeiters (1968, with illustrations by Davenport), a study of fakery and forgery in contemporary art. Together they perform feats of pre-Internet scholarship; together they mourn Cocteau and, eventually, Pound. They also mourn Kenner’s first wife, Mary-Jo, and Davenport’s father, Guy, Senior. These letters in particular are masterpieces of dignified consolation and stoic kindness. “Your letter about your father … puts the plight with such dignity that neither comment nor consolation would be anything but impertinent,” writes Kenner perfectly, one vast solitude respecting another.

A discovery they do not make together is Kenner’s, midlife, of Christianity: “The Change … was instant, massive, silent, total, and unlike any previous major decision of mine was quite untinged by a certain reckless postponement of detailed consequences,” writes Kenner. “I can only stand in awe of your metanoia, not having the gift of faith,” responds Davenport. Perhaps here Athens begins to fall out of synchronicity with Jerusalem.

One finds Davenport, throughout, the more effusive of the two (“One of these days you ought to sit down and teach me how to write”), as well as the one who consistently frustrates planned visits. Davenport’s response to Kenner’s initial job offer is revealing: “I discover I’ve never really applied in cold and laid-out formality for a job before,” he writes, sounding a note of helplessness before the hurly-burly of quotidian procedure that resonates throughout the collection. He never does join Kenner at Santa Barbara—too far from home. By 1977, he feels “out of synchronicity” with his great friend; the following year he begs off a visit because the mere idea of getting on an airplane triggers “ten hours of knotted stomach, hot nerves, shame, and disintegration of pluck.” In 1987, he simply writes, “I do not travel.”

In a larger sense, both writers prefer, intellectually speaking, to keep to their own rooms. Their generosity with each other, and with those of similar mind, balances a vast disgust or contempt toward the world at large, not always earned. They share the misanthropic streak of the committed avant-gardist, writing always as though silliness were worse than wickedness. (“We must keep tab as to which of us has the dumbest students,” writes Davenport, sounding just like every mediocrity who has ever stunk up a faculty lounge.) Both writers’ love for the fascist Pound has long drawn suspicion, and their occasional use of slurs, along with Davenport’s description of Jews as “clannish, suspicious, prejudiced people,” will hardly reassure such readers. What failing, in such a sensitive irony-detector as Davenport’s, can have led him to call Jews “prejudiced” a mere nineteen years after the camps closed? The asociality of their shared worldview at times becomes open amorality, as when Davenport writes: “Motion is the 19th century theme.… Babbage takes child labor for granted. If one can simply take such things for granted, as we take slavery for granted when we consider Greece, then we can see the technological/aesthetic exhilaration.” Sure, and if one removes the meat from a burger one discloses a fascinating ketchup sandwich.

At first one detects here simply the besetting sin of all passionate readers: the tendency to find other people (particular specimens aside) a regrettable distraction from one’s reading. But in fact, there’s an implicit politics at work, as there always is, for these professedly apolitical writers: they are stoic Roman aristocrats many centuries too late. (Two college teachers pretending to be Seneca: here is another fascinating fake from the minds that brought you The Counterfeiters.) “The orders must keep each to its excellences, or order itself collapses,” writes Davenport, whose own labyrinthine mind ought to have disclosed to him examples enough of the higher orders’ constant failure to keep to any sort of excellence at all. Such is their hatred of insubordination that Davenport spends at least two letters venting his indignation at a hippie in his town who had flung a flower into the path of a cop car. Lock him up and throw away the key: thus speaks the same Guy Davenport who, several years and several hundred pages before, calls a student’s parents “tyrannical” because they prevent him having further sex with said student. The Davenport-Kenner Vortex can swallow such inconsistencies, because aristocrats love nothing more than taste, and it’s always bad taste to point out the obvious: Isn’t antisemitism bad? Should you be sleeping with your students? Neither the Christian Kenner nor the pagan Davenport ever considers the possibility that social order, like the Sabbath, is made for us, not we for it.

Though the editor, Edward M. Burns—his commentary throughout “a miracle of ebulliency, gusto, and help,” as Joyce once said of Pound—suggests in his introduction that the friendship gradually cooled because Kenner disapproved of Davenport’s increasingly open sexual fascination with teenage boys, it is Davenport’s side of the correspondence that dwindles, on the evidence here, to almost nothing. (Perhaps a Collected Phonecalls of Kenner and Davenport would tell a different story.)

In 2002, Kenner writes: “We’ve been separated for too long; here I am in the final months of my 79th year.” Within three years, both are dead, having added to the literary canon Pound, Lewis, Zukofsky, Jonathan Williams, and, despite all that can be said against them, themselves. They will endure as examples of everything best about the stoic mind: its orderliness, and its ability to discover and name unexpected connections, born of the tendency to see time as an impertinence. Thought is, among other metaphors, a labyrinth. And what’s a labyrinth without minotaurs?

Phil Christman teaches first-year writing at University of Michigan. His work appears regularly in Christian Century, Commonweal, and The Hedgehog Review. He is at work on a book about the Midwest.