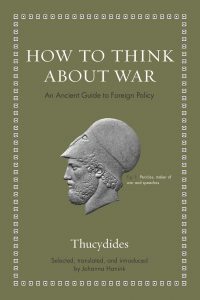 How to Think about War: An Ancient Guide to Foreign Policy
by Thucydides,
edited by Johanna Hanink.
Princeton University Press, 2019.
Hardcover, 336 pages, $17.

If pulled from his grave near the base of the Pnyx Hill, unceremoniously revivified, and given a chance to witness so gratuitous a spectacle of rhetorical excess, passion, hastiness, recrimination, and remorse as, say, an average day on Twitter, Thucydides might feel a bitter satisfaction in noting how little human nature has changed since his writing.

For some years, however, this forbidding Greek’s portrayal in the headlines—such as it is—has given pride of place not to his immortal portraits of political melee but to his purported notion of the “Thucydides trap.” The term was coined by Harvard political scientist Graham Allison to describe the great risk of war that occurs when a rising power, in our case China, confronts an established power, that is, the United States. At one point in his recent book on the subject, Destined for War, Allison generously suggests it was better that Thucydides did not live to see his beloved city of Athens lose the war she started. (Unfortunately, as much for Thucydides as for Allison, the historian did in fact survive the Spartan victory in 404 BC.)

Luckily for us, we now have a testament in our own time to Thucydides’s unmatched ability to illustrate the awful sway that passion and persuasion wield over human affairs. Johanna Hanink, a Brown classicist (in the sense pertaining to the university in Providence), has given us How to Think about War, a collection of the most well-known speeches in Thucydides’s History. The book is part of an attempt to resurrect a genre of classical handbook that was once a staple among the educated but which has, along with the classical persuasion in general as a subject of more than purely academic interest, fallen on hard times in past decades.

The six speeches—from Pericles’s successful attempt in 432 BC to convince the Athenians to go to war, to Nicias’s vain bid to scuttle the Sicilian expedition—accompanied as they are with Hanink’s succinct and reserved introductions, together make up a convincing précis of Thucydides’s mammoth history.

The translations are fresh but faithful. They convey the delicate equilibrium of Thucydides’s prose without rendering it stagnant or stilted. True, Hanink’s rendering of an especially famous line in Pericles’s funeral oration—“The city as a whole is an instructive model for Greece”—is a little less soaring than the version in the trusty Richard Crawley translation, which features the memorable line, “We are the school of Hellas.” But elsewhere her version is more direct than Crawley’s (no insult intended to Crawley, considering he wrote under the literary conventions of the nineteenth century). Crawley, for example, has the beleaguered Melians object, “It is expedient” that the Athenians “should not destroy what is our common protection.” Hanink, on the other hand, has them say, “We think it will be to your advantage … to refrain from violating a rule of common decency,” succinctly thus capturing the Melians’ failed bid to repackage their claim for justice in the language of self-interest.

The rhetorical focus of the handbook is equally welcome: after all, the speeches are the gems of Thucydides’s history. Their historical accuracy is debated—the historian himself says, obscurely, that he either reported the speakers’ words exactly or wrote down what they ought to have said—but their accuracy is also, in a sense, moot. Thucydides uses dialogue at least as productively as Plato, as a vehicle to set ideas against each other, illustrate paradoxes, and give the reader not a pat conclusion but a vocabulary and a lay of the political land. This is one reason why, also like Plato, Thucydides is a perennial source of wisdom: he does not seek to convince or inculcate as much as to unsettle and challenge.

Accordingly, political realism—the idea that national interest is what matters in international affairs, and justice is beside the point—is not propounded in Thucydides’s work: it is, quite literally, put up for debate. The Melian dialogue is the most famous exemplar of the realist thesis, depicting as it does an Athenian expeditionary force telling the neutral Melians to submit to their alliance or die, all the while insisting justice is irrelevant and only political interest matters. But Thucydides’s choice to put these harsh words in the mouths of the Athenian generals leaves open the question of whether he means it as an endorsement or a condemnation. He explores the notion in a more detailed way in a lesser-known passage, concerning the island of Mytilene.

The story is as follows: some ten years before the affair at Melos, the wealthy city of Mytilene revolts from the Athenian tributary alliance. The ruling Mytilenian oligarchs seek support from Sparta, but when it is slow in coming, they decide to arm the people, who promptly turn on their rulers and threaten to surrender the city. The oligarchs then beat them to the punch, surrendering the city under their own authority.

The Athenian popular assembly, enraged by the Mytilenians’ desertion from their alliance, condemns the entire city to die—not just the oligarchs who had engineered the revolt. The following day, however, Athens awakes with a guilty conscience. A second meeting on the Mytilenian question is convened. Thucydides presents the debate as a contest between two speakers. A little-known figure, Diodotus, takes the stand against the vicious demagogue Cleon, who had championed the first motion to kill the Mytilenians.

Faced with an obviously unjust proposition—massacring Mytilenians who had nothing to do with the revolt—we would expect Cleon to argue that Athenians should ignore justice and follow their interest, while Diodotus might argue the opposite. But in fact, they make opposite arguments from what we might suspect. Cleon argues that all the Mytilenians are guilty by association and they justly deserve death. Diodotus says justice doesn’t matter and Athenians should only think of their own interest. Dead men don’t pay tribute: why not spare the Mytilenians and continue to extort money from them?

Diodotus carries the motion narrowly and, in a thrilling conclusion to the affair, a second ship is sent to Mytilene to catch the first ship with its execution orders. Mytilenian ambassadors hitch a ride, feeding the rowers wine and honey-cakes to keep their energy up, and they arrive in Mytilene just as the ax is about to come down on the head of the first Mytilenian. A close save.

Though justice is served, barely, the affair leaves a bitter taste in the mouth. Justice and interest are thrown into confusion, as arguments for doing the right thing are made in self-serving language, and vice versa. Justice and interest become empty words, stratagems for winning a rhetorical battle in the Assembly. Diodotus and his policy win the day: that is the only definite conclusion to be drawn. Thucydides’s world—our world, too, quite possibly—is one where abstractions, even those whose importance to human life are as universally acknowledged as justice and self-interest, are subordinated to the game of politics. This is a game of persuasion at any cost, in which abstractions are simply tools useful to appeal to whatever popular passion happens to be excited at a given moment. The History is, in this sense, a terrifying challenge to political philosophy: it demonstrates the immense power of politics to liquefy all solid philosophical concepts into an undifferentiated soup, rob them of their proper ends, and make them ancillary to itself. It is a challenge that remains unsurmounted.

Growing old in exile and more painfully aware of how politics deforms principle than most, Thucydides had every reason to despise the world of the Assembly, where cynical rhetors persuaded the Athenians to make so many ill-advised decisions that resulted in so much sorrow, for themselves and for others. But unlike his bohemian contemporaries, Socrates and his circle, Thucydides does not hate the world of politics. Despite his own bitter losses, there emanates a kind of love of the arena from his presentation of rhetorical repartee. He adores Pericles and seems to respect Diodotus for employing every trick up his sleeve to beat the odious Cleon on the Mytilenian question. We, too, love Thucydides not just for his grave warnings but also for the eagerness that his speeches rouse in us for the hurly-burly of the political world, that damned and damnable pageant which alone gives human glory.

Nick Burns has written reviews for the New Criterion and has material forthcoming in the Hedgehog Review.