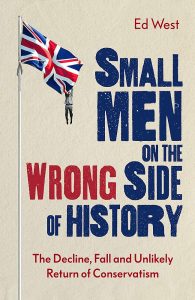 Small Men on the Wrong Side of History: The Decline, Fall, and Unlikely Return of Conservatism
By Ed West.
London: Constable, 2020.
Hardcover, 426 pages, $29.

The story of conservatism since 1945 has been one of failure wrapped up in frequent electoral success. While anatomizing this oft-noted conundrum, Ed West outlines excellently the intellectual and stylistic differences between Left and Right, before concluding ruefully that the forces of conservatism are unlikely to regroup, let alone regain lost ground.

Politics is about ideas, morals, and practicality. It is also about radically oppositional personality types, reflected in culture and possibly rooted in neurobiology, which govern our aesthetics and outlooks, and compel us to choose sides in a culture clash that has been continuing since the Greeks dreamed up Cassandra and Pandora. Cassandra is an archetypal “conservative,” and Pandora the original “liberal”—the former eternally seeking grounds for gloom, the latter reasons to hope. The author is instinctively in the Cassandran camp, although many of his allies are almost as little to his taste as the myrmidons of the other side.

West is the son of two conservative journalists, Mary Kenny and the late Richard West, and the brother of another (Patrick). Sometimes sympathies run in families, almost as persistently as physical features. Now in early middle age, West finds himself turning into his father, a man so reactionary he didn’t learn to drive, and spoiled his ballot papers. He was brought up in “bohemian conservative” circumstances in London, encountering eccentrics like the buckled shoe and monocle-wearing French priest, “aristocratic-looking” descendant of a palace guard killed during the Revolution, who called France the “regicide state.”

The broadminded author loathes the limited philosophy expressed by British tabloids, climate change deniers, conspiracy theorists, Creationists, identitarians, incels, Objectivists, populists, “shock jocks,” Trump, or UKIP, all of whom he thinks make the Right much uglier than it ought to be. Sam Francis famously called the Republican Party “beautiful losers”; West would dispute that “beautiful.” But however abysmal his opinion of many on the Right, his opinion of the alternative is lower yet. Union Jack waistcoat-wearers et al. are embarrassments, but at least they are his embarrassments.

He broods on the diminishing socioeconomic status of the Right’s supporters. The erstwhile party of the influential rich now draws ever-growing allegiance from the lower middle and working classes. The author favors uplift, and realizes that the rough auxiliaries who founded his Europe were as unvarnished as today’s Trumpians, living in their centuries’ equivalents of Flyover Country. But short-term electoral success may entail longer-term irrelevance. Conservatism is retreating into older age-groups, less wealthy suburbs, left-behind towns, and backwoods, while Leftists consolidate their control of the institutions that set agendas and the metropolises forming the future. They are assailed as “elitists,” and they are—but elitism is always more a help than a hindrance. Faiths, like fashions, filter downwards—and today’s minority opinion is often the mainstream view of tomorrow, with which the day-after-tomorrow’s conservatives will probably play catch-up.

It is a cultural commonplace that conservatives are boring, dim-witted, morally inferior, and repressed. Sometimes, they even see themselves in such lights, leading them either to avoid engagement (except in the ballot box, whose “shy Tories” surprise psephologists), or adopt perverse positions at least partly to provoke. Some Rightists actually are, as Barack Obama remarked of Al-Qaida, “small men on the wrong side of history,” overcompensating for existential fear with intemperate anger. Where Conservatives do cling on in prominent positions, they are imperiled islands, like Catholic recusants in the days of Dissolution.

The Cassandra-Pandora dichotomy has reproduced itself in reality. In countless contretemps, conservatives have found themselves on history’s back foot, fighting implacable opponents with a gallantry touching because ultimately unavailing. The humorous 1930 classic, 1066 And All That, summarized one emblematic Left-Right confrontation—“The Roundheads were right, but repulsive. The Cavaliers were wrong, but romantic.” Today’s Right has been robbed not just of victory, but even of romance, its adherents now and retrospectively regarded as “phobes” and rubes, carriers of contagions and false consciousness. Old icons have been pushed from the pantheon, as saints’ faces were scratched from medieval rood-screens—chivalry, Church, femininity, hierarchy, masculinity, monarchy, nation, race—and colorless, country-less, “rational,” sexless idols have taken their place on the shockingly bare plinths. This is the cruelest of outcomes for instinctive conservatives, who privately revel in ruination, so long as they can gild their myriad “lost causes” with mythic lustre.

The Right’s old emphases on duty, emotional restraint, experience, and realism are intrinsically less appealing than the Left’s freedom, novelty, and utopianism. It is the perennial difference between Augustine and Pelagius, Burke and Rousseau, a Pope and a Pentecostalist, Churchill’s funeral and Diana’s, Margaret Thatcher and Michelle Obama, a soldier and a singer, a coat of arms and a rainbow flag. On what psychologists call “the Big Five personality traits,” Rightists score highest only on conscientiousness, leaving Leftists to lay claim to agreeableness, extroversion, and openness. They also score more highly on the last trait, neuroticism, which they display abundantly on Twitter. They burnish their reputation endlessly through their dominance in academia, the arts, and the broadcast media. Conservatives wind up on the “wrong side of history,” because they rarely write histories—while, as Shelley noted hopefully, “Poets are the unacknowledged legislators of the world.” Often, the Right has good ideas, badly presented, and the Left bad ones, imaginatively expressed.

Leftists also practise solidarity. Strangely for those who so stress freedom, Leftists are frequently herd animals. They appoint and promote allies, decline to denounce each other, and ignore their side’s crimes while exaggerating those of the Right. There is even de facto “discipline” through the antifa fringe, who routinely subject outspoken Rightists to “deplatforming,” “doxxing,” vandalism, and violence. To Leftists, political parties are communal, almost covenanting organisations—while for conservatives, parties are just means to an (indefinite) end. Everything, to true-believing Leftists, is political, while conservatives are usually content to expostulate, before abandoning events to individuals, or Fate. Individualism extends to the Right’s farthest fringe; while the Left has goon-squads, the most lethal terrorists of recent times have been lone-wolf Rightists.

Another difficulty is that the conservative worldview is not reducible to simple statements, and varies between countries. It is an essence, not a set of rigid and (supposedly) universal ideas that even children can comprehend. Leftist values can be summed up (and have been consciously) in Sesame Street, Star Trek, and Harry Potter—and inculcation continues as those children graduate to Ibsen, Harper Lee, Margaret Atwood, Mad Men, or stand-up comedians. It matters hugely that women are increasingly un-conservative, as it is usually women who set a household’s moral tone. Young people no longer rove rightwards with age, if they ever did in recent decades.

The author enjoys puncturing priggish pretensions, while admitting to inconsistencies in his own argument. He combines the ancients and obvious authorities (Burke, Kirk, and Oakeshott) with modern examples, segueing skillfully from classics to pop culture, neo-reaction, and social media folk-tales. It seems a pity to cavil with so likable a contribution to the corpus, but arguably he is overly fastidious—for instance, ridiculing those who are fixated on the Frankfurt School, before admitting it really was influential. He asserts dubiously that Germany and Israel have “found inner peace” after World War Two. He claims “memes … are perhaps the first art form in two hundred years in which the Right has excelled,” somehow overlooking Céline, Joyce, Marinetti, Pound, Yeats, and others. He disagrees with von Krafft-Ebing’s (surely incontrovertible) assertion that self-mortifying saints may have had masochistic urges.

Eventually, he undercuts his own side—a tradition in itself among conservative commentators. According to this desponding analysis, there is almost certainly no salvation in politics, and all that remains is retreat into religion. But this is unfeasible, and even if it wasn’t it wouldn’t alter much, because as he observes, “progressivism is a heresy of Christianity”—albeit lacking Christianity’s charity, culture, humility, and transcendental quality. There were good reasons why the Romans tried to repress the upstart faith, with its imperially unsettling equality, eschatology, free will, individualism, ostentatious piety, sentimentality, and universalism (and sentimentality’s obverse, bitter hatreds of “heretics”).

Probably his resignation is born more of private diffidence than public despair, because, as he shows, liberalism is vulnerable—embedded for so long it is atrophying, its yawn-inducing clichés eliciting counter-rebellion among the least “awokened” most awake. It has listened only to itself for so long that many of its members are automata, like the “non-player characters” in Dungeons & Dragons. As the West shrivels, liberalism is becoming a luxury even liberals can’t afford—and their vapid ideas of identity politics will be overtaken by earthier, older variants. Where conservatives prove unequal, new parties will emerge, with more determined and lateral-thinking leaders, who understand metapolitics, and pay attention to presentation. These mightn’t all call themselves conservative, but on the other hand they might actually conserve.

Derek Turner is the author of the novels A Modern Journey, Displacement, and Sea Changes, and reviews for journals including the Spectator and Irish Times. His website is derek-turner.com, and he is on Twitter @derekturner1964