Toward a Renewal of Europe 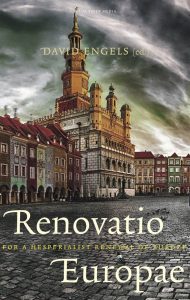 Reviewed by Scott B. Nelson

As always, Europe is in crisis. Some lament the European Union’s longstanding democratic deficit. Others opine that it is not moving fast enough to address the challenges of climate change, migration, and economic stagnation. And then there is Brexit, which some consider a refreshing display of patriotism and a reassertion of national sovereignty, while others lament it as tragic and stupid.

Renovatio Europae: For a Hesperialist Renewal of Europe attempts to address the origins of some of these crises. Edited by David Engels, formerly a professor at the University of Brussels and currently a research analyst at Instytut Zachodni in Poznan, the book gathers essays by scholars from Eastern and Western Europe in what promises to be a series of books proposing new ideas for the EU. This first volume tackles what is probably the least discussed but most important dimension of EU reform: Europe’s identity and values.

From the start, Renovatio Europae takes a bold stance. Engels outlines it in his Introduction:

Only solidarity between citizens can help to steer the continent through the impending years of self-created crisis and decline. However, without a common identity, it will not be possible to establish such social cohesion, and it has been one of the lessons of the migration crisis that such an ‘identity’ cannot be based on purely humanist and universal values; it requires a deeper anchoring in the cultural, historical, and spiritual subconscious of a common past shared for centuries, that is, an anchoring in those values generally considered as ‘conservative’[…].

As Engels points out, the penultimate version of the preamble to the proposed EU constitution tried to avoid using the word “Christian” in describing Europe’s heritage (no mean matter insofar as a constitution is an expression of a country’s identity). But, as András Lánczi, rector of Corvinus University in Budapest, argues here, the laws outlined in a constitution are insufficient on their own to confer identity to a country. More importantly, laws reflect traditions and the fundamental beliefs of a people.

There is potentially something more profound at work, however. Lánczi sees Europe’s problems as rooted in four excesses of liberalism: individualism, rationalism, legalism, and the notion of progress. The individual has unequivocally been raised above the community, with all of the narcissistic consequences that follow. This includes the supremacy of the ego—both as above the community and as arbiter of right and wrong.

This has spilled over into legalism, where positive law has increasingly crowded out—and been separated from—any connection to natural law, Lánczi explains. The malleability of positive law has thus convinced us of the possibility of progress, and has ostensibly proven that our nature has evolved—or can evolve—into something higher or more perfect than what it already is.

In another chapter, the German writer and journalist Birgit Kelle notes that conservatives need to define themselves within the diversity of liberalism and not in opposition to it. At the same time, leftist defenders of diversity need to “honestly confront traditional conservatives.” Here Kelle touches on another of the book’s recurring themes: that the needs of the majority—the community—have instead been ignored by an elite minority, who do not share the interests or concerns of the majority. These issues are closely connected to Europe’s demographics problem. Kelle writes, “While countries such as France are very consciously caring for their natality, Germany is characterised by a real negation of any demographic politics because of its history.

In her contribution to this volume, French philosopher Chantal Delsol adroitly observes that while an individual can choose to sacrifice himself to morality, a society is responsible for immortality and “the survival of the cultural world it has to care for.” She continues:

[T]he question of the survival of a society as its main finality was already at the heart of the difference between Athens and Rome, separated Machiavelli from the preceding Helleno-Christian tradition, and later on, characterised Hitler’s consecration and, at the same time, rejection of Machiavelli: Since National Socialism […] we have lost all desire to consider the survival of a society as an aim as such.

So what do the authors propose in order to scale back the four excesses of liberalism and rebuild Europe (and Western civilization)? German economist Max Otte argues that Europeans should push back against the Anglo-Saxon legal and economic traditions that have been imported into Europe. Instead, they should rediscover their own continental tradition. In contrast to the present model of financial capitalism, such a model would include several components: “An ethics of responsibility instead of success. A social obligation of property. A culture of solidarity and public goods and state systems in health care, education, broadcasting and public utilities. Strong banks and credit markets and supplementary stock exchanges.”

Europe’s leaders could also take more responsibility for their actions—particularly in the area of aesthetics. Oxford and Warsaw University professor Jonathan Price surveys the ugly landscape of the twentieth century—particularly the “Europa Building” eyesore in Brussels—and puts forward some practical questions that anyone considering a new work of architecture should consider. These include: Would you and your family be willing to work or live in or around this building? Has the building been erected to outlive current trends and fads (or has it been built exclusively for profit or expediency)? The answers to such questions could then be stored for public reference so that one’s aesthetic judgments can be subjected to the praise (or ridicule) they deserve.

The importance of expunging Europe of its modern-day ugliness should not be overrated. As Price points out:

No one would die defending the Europa Building, holding onto the sacred Euro notes, with fake cathedral windows from nowhere on them, as one might have died at the feet of the original Parthenon, bearing medallions with images of the gods of Greece. Moral patriotism of the kind that inculcates courage cannot go far without aesthetic patriotism.

Other contributors to this collection are less focused on specific political proposals, having lost faith in the capacity to effect real change at the political level. For Alvino-Mario Fantini, editor of The European Conservative, it is clear that the reformist attitude that was meant to bring us back to classical limited government and ordered liberty has failed. He sees the populist nationalist movements across Europe as having arisen as a result of this failure.

Fantini is set on an instauration of the “Christian West” to be pursued through three approaches. First is to reestablish a clear idea of our identity. He stretches back to the Ancient Near East, Judeo-Christianity, and Greece and Rome to rediscover the identity of the West. Including the Ancient Near East may strike some as odd; but it has its place, Fantini says, for it was in the Tigris-Euphrates river valley, centuries before the Kingdoms of Israel and Judah, that man first began to explore the nature of myth and reality. Here, under “the crushing reality of existence,” man began to develop his sense of self, later completed through Christian revelation.

Judaism and Christianity represented that leap from polytheism to monotheism, and taught us to respect the rights of others, “spread[ing] a message of transcendence and salvation, of liberation from the follies and sufferings of this world.” These faiths differ from other religious traditions that make man either the measure of all things or irrelevant vis-à-vis some fearsome deity (thus preventing us from looking beyond death to God himself). As for the Greeks and Romans, the Greeks systematized the speculative thought that was born in the Ancient Near East; the Romans then restated it accurately and clearly; and Emperor Augustus made the empire great again.

The second approach Fantini suggests is to rebuild Western civilization by weaning ourselves off of the exclusive focus on policy prescriptions. We need an inspiring vision and a greater focus on educating the young—at home and in private circles—and transmitting our culture to them, particularly through the teaching of Western philosophy, humanities, and liberal arts. Finally, the third approach he mentions involves “sanctifying ordinary reality” and “re-sacralizing the world.” Daily activities should be imbued with a more supernatural vision, he suggests, one that seeks the transcendent in everything and which helps to sanctify ordinary life.

What could such a rebuilt Western civilization look like? Fantini envisions

But he also says that “beyond these material expressions, there is deep respect—for the past, for the elderly, infirm, and the weak, for every living thing that blesses our lives. And, in the shadow of death, there is gratitude and humility as we remember our ancestors and the obligations of keeping alive the ‘democracy of the dead’.” Such a vision is bound to be polarizing in the Europe of the twenty-first century. Perhaps this is why the promising movements that Fantini mentions have been so combative and controversial: La Manif pour Tous and the Gilets jaunes in France, or Nazione Futura, Alleanza Cattolica, and the fledgling Academy for the Judeo-Christian West in Italy.

Realizing this vision would of course require a political architecture far different from that of the EU. In the final essay, Engels refers to a “Hesperialist” European Union. He defines “Hesperialism” as “a new political ideology in favour of (limited) European integration out of respect for our common shared past and our present and (future) shared challenges, without crushing local, regional, and national traditions and identities under the full weight of multiculturalism, individualism, turbo-capitalism, and globalisation.”

Engels sees the Holy Roman Empire as a model for Europe and proposes some practical reforms (which one hopes he will elaborate on in a future work). Europe would first have to ditch the “ever-closer union” mentality, without implying any sort of artificial deconstruction of the union itself. The union would be multiethnic with decision-making at lower levels. The European Parliament would function as the lower house with the Council as the upper house. Decisions would be made on the basis of a two-thirds majority. The President would be directly elected and deal with foreign policy. Secretaries would be elected by the Parliament and with equal state representation in areas such as defence, police, infrastructure, legal harmonization, strategic resources, education/research, and finance.

These institutions should embody the spirit of the continent’s Greco-Roman and Judeo-Christian traditions. It was, after all, one of the EU’s own founding fathers—Robert Schuman—who declared: “Democracy will be Christian, or it will not be. An anti-Christian democracy is bound to become a caricature that disintegrates into either tyranny or anarchy.” Engels goes on to cite another passage from Schuman that leaves no doubt as to the central role that Christianity should play in Europe. Additional policies following from this would include defending the monogamous family, a rejection of abortion on demand, incentivizing childbearing and education, and limiting genetic experiments.

The contributors see Europe, with its current policies and political approaches, as fast on its way to losing the dynamism and prosperity that have marked its success. With editions in English, German, and Polish—and editions forthcoming in French, Italian, and Spanish—this book is a robust contribution to the diverse world of European ideas, and toward a reconsideration of its rich and divergent legacies.

Scott B. Nelson is Research and Strategy Advisor at the Austrian Economics Center / Hayek Institut in Vienna, Austria. His book, Tragedy and History: The German Influence on Raymond Aron’s Political Thought, was recently published by Peter Lang. He is presently working on a book about Cicero and modern politics. He blogs at Vienna Symposium.