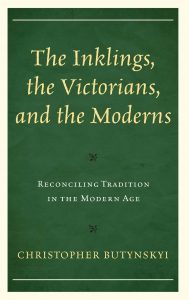 The Inklings, the Victorians, and the Moderns: Reconciling Tradition in the Modern Age
by Christopher Butynskyi.
Fairleigh Dickinson University Press, 2020.
Hardcover, 206 pages, $90.

Reviewed by James A. Davenport

Since Buckley, it has often been said of conservatives that they see themselves as those who stand athwart history yelling “Stop!” Conservatives yell “stop” because they see a culture headed forward without being aware of where it has come from. They wish culture, politics, and academia to maintain a connection with the tradition they were built on. But what is the good in yelling “stop” if you cannot translate that tradition, that message, to your own age? In historian Chris Butynskyi’s new book, The Inklings, The Victorians, and the Moderns: Reconciling Tradition in the Modern Age, he teaches the lesson of translation.

A work of intellectual history to its core, this book offers its reader an opportunity to look into the task taken up by the group Butynskyi calls the “traditionalists.” He focuses here on a dozen men from the twentieth century including C. S. Lewis, J. R. R. Tolkien, Charles Williams, Owen Barfield, Josef Pieper, G. K. Chesterton, Russell Kirk, Christopher Dawson, Irving Babbitt, Paul Elmer More, Hilaire Belloc, and T. S. Eliot. Loosely defined, these thinkers were “individuals unwilling to see things without the value of the past and its historical evaluation.” The task of the traditionalists was to “reconcile tradition with the realities of their own age, one that was increasingly incompatible.” These traditionalists, Butynskyi posits, were gathered around “a form of common sense (not practical thinking), but a sense of what is understood and shared to be true”—a “common mind.” Ironically, that common mind was not so common and remains not-so-common today. For reconciliation to happen, translation of this mind was necessary.

This, it seems, is the main theme of the book and the one that is most relevant to the plight of the contemporary conservative. Often today, as it was in the last century, adherence to tradition is an obscurity. Those who practice traditional forms of Christianity are an oddity in modern society. Devotion to an age or idea past rejects the progressive orthodoxy that would ceaselessly march on. Butynskyi defines tradition as “a way of thinking, behaving, or doing something that has been used by the people in a particular group, family, society, etc., for a long time; an inherited, established, or customary pattern of thought, action, or behavior (as a religious practice or a social custom).” He also notes how the idea that tradition is “unverifiable,” unlike science, leads to a certain skepticism of tradition.

One way the traditionalist thinkers translated this unverifiable tradition, Butynskyi says, was through the use of fantasy and myth. Many are familiar with the mythical works of J. R. R. Tolkien and the fantasy tales of C. S. Lewis, which are more than mere children’s stories. Butynskyi writes, “Fantasy literature remains distinct from science fiction due to its lack of logical or scientific explanations for the often impossible events that occur throughout its lines of prose. Fantasy, for the Inklings, although differentiated from myth by definition, could serve as a bridge that reconnected the modern scientific age to the pre-modern mythical age.” Through this lens, fantasy transcends entertainment to become a mode of translating the “common mind.”

Butynskyi highlights a few specific literary methods in fantasy that do the actual work of translation, such as the use of “deep knowledge” as an analogy for tradition. A prominent example of this that immediately comes to mind is in Lewis’s The Lion, the Witch, and the Wardrobe. Aslan sacrifices himself to save Edmund and ultimately defeat the White Witch. What is it that allows Aslan to rise again from his death on the stone table? It is a deeper and an older magic or knowledge—one of which the Witch herself is not aware. Analogous to the unawareness of tradition prevalent today, the Witch falls into a trap she lays for herself through her ignorance and oversight of the deep knowledge of the tradition of Narnia.

One traditionalist mentioned by Butynskyi, Russell Kirk, supports the point made here with his expansion of Edmund Burke’s term “moral imagination.” One broad theme found in many of Kirk’s writings is that nature imitates art. This imitation requires a moral imagination, one that does not employ explicit moral exhortation but rather subtly presents a moral vision. We need poets, not preachers. Indeed, Kirk writes, “the better the artist, one almost may say, the more subtle the preacher.” In light of this, one critique of this book is that it spends too little time on poetry as a mode of translation unto itself. Butynskyi does cite particular poems and even the last century’s greatest poet (T. S. Eliot), but a more lengthy treatment of poetry would have been appropriate. Poetry is uniquely important as a mode of translation because it is timeless and demands form. Fundamentally imaginative and locked in craft, it has the potential to rise above the present and translate tradition to any age.

The Inklings recognized that, historically, Christianity was in a state of decline in the West. In the first millennium AD, Christianity was pervasive, but only after careful interaction with Greco-Roman paganism. Christian apologists like Justin Martyr and Irenaeus saw success precisely because they did not abandon the mode of discourse invented by pagans, but mastered and utilized it on behalf of their burgeoning faith.

Too many traditionalists today make the mistake of speaking in a language that is unrecognizable to the current culture. It is not a weakness but a skill to bring tradition to a culture in its own language.

One does not often expect to call a work of intellectual history “relevant.” Nonetheless, in a world where “cancel culture” and progressive ideology have seemingly taken over popular discourse, this book serves as a helpful reminder that traditionalists who came before us reconciled tradition with their age. To young conservatives today this book serves not only as evidence of, but as an exhortation to, the translation of tradition for our own age. In line with Chesterton, Kirk, the Inklings, and others he references, Butynskyi himself is helping “to keep the candle of truth lit even in periods of human darkness.” One can only hope that histories such as this one continue to be written and read, that a few more Chestertons and Kirks might be brought up to be bridges of tradition to this age.

James Davenport is the Academic Program Officer for the Intercollegiate Studies Institute and a graduate of the Templeton Honors College where he studied politics, philosophy, and theology. He tweets at @mrJSDavenport.