Two Cheers for the Spanish Empire 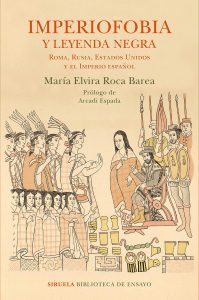 The politically correct vandalism we see today in America against statues of Christopher Columbus and Saint Junipero Serra has its hardy roots in a propaganda war launched in Europe centuries ago. That the progressive iconoclasm that targets figures from Confederate generals to Founding Fathers also swept up a Genoese explorer and Majorcan missionary is testimony to the survival of the Black Legend, an early form of psychological operations or PSYOPS waged against the Catholic Spanish Empire by its enemies. The idea behind it was “Spanish Exceptionalism” with a twist—that Spain and its works were uniquely bad.

This is the subject of a recent work of fascinating historical analysis published in Spain in 2016 by the academic María Elvira Roca Barea, Imperiofobia y leyenda negra: Roma, Rusia, Estados Unidos y el Imperio español. A dense and scholarly polemic, it has proved to be a controversial runaway bestseller with twenty-five editions and more than a hundred thousand copies sold, a huge figure in Spain. It is because of this book that one Spanish newspaper described Roca Barea as “the woman who has liberated thousands of ideological hostages from a national cancer, the Black Legend.”

Roca Barea received her doctorate from the University of Malaga, but her background is in medieval literature and classical philology, not in history, and her broadside has provoked a furious, ongoing response by some Spanish historians and the leftist Spanish media, some asserting that twenty or thirty of the more than a thousand footnotes in her book are either wrong or skewed, or rejecting the work outright as right-wing revisionism. She is a secondary school teacher, which has garnered additional scorn.

Roca Barea has fiercely defended herself and, given that her work is often seen as a defense of Spanish Catholicism, has emphasized in the introduction to her book that she comes from a “masonic and republican” family (thus traditionally anti-Catholic in Spanish terms). She adds archly that the cleric with whom she has had the most contact is Pastor Cummins of the Baptist congregation on Harvard Street in Cambridge, Massachusetts.

The Black Legend is, when no other adjective is used, about Spain and about no other country, “the opinion according to which the Spanish are in reality inferior to other Europeans in those qualities that are commonly considered civilized.” Roca Barea traces the precise term to the Spanish-American War of 1898 although it was popularized by historian Julián Juderías in 1914. While the term is a century old, the actual practice is rather ancient.

Roca Barea spends much of the first part of her book showing that the noxious definitions used to demonize Spain from its sixteenth-century Golden Age are actually shared by anti-imperial propaganda used against other great powers, specifically, against the Roman Empire, Imperial Russia, and the United States of America. This “universal model of imperiophobia” includes such criticism as the idea of “an unconscious,” undeserved, empire, “a deep-seated desire for dominion and riches” (a phrase from Roman historian Sallust’s Epistula Mithridatis condemning Rome’s lust for power), barbarism, cruelty and lack of culture, bad customs, sexual depravity, impiety, and “bad” blood. Her point is that critics of empire and and anti-imperialist nationalists throughout history often draw from a common fund of stereotypes.

Elite European criticism of the United States having a mongrel culture, worshiping the Almighty Dollar, or being controlled by Jews finds an interesting echo in sixteenth-century accusations by resentful Italians that greedy, lustful Spaniards were a mixture of Jew, Moor, and Visigoth. The offensive term Marrano, used in Spain to refer to crypto-Jews, was used of all Spaniards in sixteenth-century Italy. Others described them as impure offspring of Carthaginians. Spain for these Italians was backward, medieval, and gothic; it was everything that the Renaissance was not, and indeed that cultural flourishing had happened in spite of Spain and not because Spain ruled much of Italy and much of Western Europe.

This phobia against Imperial Spain, born in Italy, would then spread north to the Netherlands, Germany, and England, subsumed into the turmoil of the Reformation. Elizabethan England, the Dutch Prince William the Silent, and Martin Luther proved to be masters of propaganda. This was war propaganda in the service of a new religion and of German nationalism. It was directed very effectively against Habsburg Spain, the imperial champion of the Catholic Counter-Reformation. Luther, who wrote that most Spaniards were “Maranos and Mamelukes” (that is, of Jewish and Muslim origin), produced 3,183 pamphlets by 1530 that were churned out by hundreds of new printing presses.

The Dutch, caught in a brutal war of independence against their Spanish overlords, were even better agitators. A thousand executions by the Duke of Alba, who was rather less bloody than were the Tudors in suppressing revolt in Ireland, became 200,000 in Dutch propaganda. One widely distributed fabrication from 1570, purporting to be a secret document of the Spanish Inquisition handing over all of Holland to the Holy Office, fooled historians for three centuries. Roca Barea dubs William the Silent a founding father of propaganda and so “without exaggeration, one of the founding fathers of the modern world.”

While this type of anti-imperial propaganda has appeared in different ages and places, and while some of the jibes against the Spanish—that they were tainted by Jewish blood—do not translate well to our age, some elements of the Black Legend are hardy perennials. The Spanish Inquisition and the “Iniquities of the Americas” were the two longest lasting pillars of this type of propaganda.

As Roca Barea traces it, “Inquisition and the Black Legend of Spain in the Americas have served as part of the ideological repertoire, with slightly different versions adjusted for time, for Protestantism, for the eighteenth-century Enlightenment, for nineteenth-century liberalism, for United States expansionism, for Latin American independence movements, for the Revolutionary Left, and finally, for Indigenous Multiculturalism.” There is indeed a thin red line of anti-Spanish Empire vitriol that can be traced from Martin Luther to Voltaire to William Randolph Hearst to Che Guevara to finally Bolivia’s Evo Morales and his Pachamama idol.

Although the myth of the particular or unusual cruelty of the Spanish Inquisition is now well debunked by scholars, it survives in the popular imagination, and not just in the antics of Monty Python. A 2009 poll of European science students revealed that 30 percent thought Galileo had been killed by the Inquisition and 97 percent thought he had “recanted” after being tortured by the Inquisition. Neither is true, of course.

The 1,346 people sentenced to death by the Spanish Inquisition in two centuries (and this includes both Spain and Spanish America) is a horrible injustice to modern sensibilities, but seems to pale in comparison with the 50,000 burned as witches in Northern Europe (let alone the body count of Western military adventures in Iraq and Afghanistan). More Catholics were drawn and quartered in Anglican England than Protestants in supposedly Inquisition-ruled Spain. The European “witch craze” that saw thousands burned in Germany and France hardly touched Spain. Twenty-seven witches were condemned to death in Spain by the Inquisition.

As for Spanish misdeeds in the New World, they were, of course, exposed by the Spanish themselves, including by Fathers Antonio de Montesinos and Bartolomeo de las Casas, and led directly to the reformist Laws of Burgos and to the remarkable debate in 1550–1551 in Valladolid on the rights and treatment of indigenous people by the Spanish conquerors. De las Casas’s famous account (published in Seville in 1552) of the mistreatment of native peoples on the island of Hispaniola was avidly used by the Protestant powers, translated and reprinted every time war with Spain beckoned. It would reappear when Cromwell invaded Jamaica in 1655 and during the Spanish-American War of 1898. Where las Casas’s outraged diatribe was well publicized by Spain’s enemies, the humanistic debate at Valladolid about colonialism and human rights did not get the same press. Those foreign readers would have learned about Spain’s abuses in the New World and nothing about the fact that the man who exposed them was listened to and had the ear of Spain’s king.

A Spanish ambassador, lamenting the “progressive” revisionism of our age, once told me some years ago “the Spanish are not allowed to be proud of their history anymore.” Roca Barea’s fine and passionate work restores, if not pride, a much-needed sense of reality and balance to popular discourse on the Spanish Empire.

Along the way there are fascinating asides, such as meeting the Spanish renegade priest Antonio Gavin, who flees the losing side in a Spanish war, becomes an Anglican priest in London, writes the salacious best-seller A Master-key to Popery in 1724, and eventually becomes a frontier parson in Colonial Virginia. Or the indigenous peasant royalist Antonio Huachaca, fighting for the cause of the autocratic Bourbon Ferdinand VII against the liberal Creole independentists of Peru in the 1820s.

Far be it for me to criticize a scholarly bestseller, but at times I wondered while reading it if this book was either too long or too short. Too short for an academic study, but perhaps too long for a popular work, it could easily have been two interesting books. But that is a minor criticism of the best kind of scholarly work, one that has enriched and elevated broader public opinion.