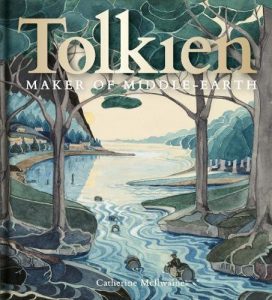 The red jumps off the page. You’re in the middle of a letter from Father Christmas to the Tolkien children, when all of a sudden, there it is—“Goblin” leaping out at you, crimson and clawed. It’s a trick Tolkien seemed to love, as another plaque in the exhibit explains that he’d wanted the inscription on the One Ring (“to rule them all …”) to be printed in red as well. We see him developing the script for those famous fiery letters, and imagine how he wanted it to blaze from the page at readers. The publishers of The Lord of the Ring didn’t go for it. The extra ink color would have been too expensive. Even the most striking item in the place, Tolkien’s beautiful mountain landscape cover for The Hobbit, had to be a little exsanguinated for publication. If you get up close to the original, you can see the texture added by the white painted over what were originally a red sun and a red dragon.

“Tolkien: Maker of Middle-Earth” is on display at the Morgan Library and Museum in Manhattan until May 12, 2019. It’s a testament to the singular achievement of Oxford professor and fantasy author J. R. R. Tolkien, but also to his failure. Tolkien took on as his life work something impossible. It wasn’t just that publishers didn’t have enough colors for him to paint his invented universe. It feels sometimes like our world didn’t.

The exhibit attracts large crowds (who are warned, on the museum’s website, that although costumes are permitted, “masks, wizard staffs, scepters, axes, bow and arrows, or swords” are not). It’s a small space with few artifacts larger than the page of a notebook—the biggest thing on display is Tolkien’s academic robe (also a still-vivid red)—so the curators have given our eyes some bigger things to rest on in the form of enlarged images of Tolkien’s watercolors covering whole walls. Thus, we can see the original of Tolkien’s piece “Eeriness” in a small glass case but also stand in front of the magnified version and imitate the Gandalfesque figure in the foreground by staring down the road limned by cool and uncanny colors as it unrolls toward the horizon.

There are two motifs in “Eeriness” that recur throughout the exhibit: surprising colors and an ever-receding horizon. Tolkien’s early watercolors, be they simply from his sketchbook or from the Father Christmas letters he wrote to his children, boast a vivid palette that one is tempted to call science fictional or psychedelic. The Northern Lights blaze with an idiosyncratic rainbow: blue, green, gold, pink, red, blue again, and purple. In “Fantasy Landscape,” we see again the central pathway and, above it, red-black mountains with gold fire dancing behind them—and, beyond that, an eclipsed disc of the sun. Tolkien’s Hobbit and Lord of the Rings illustrations, while a touch more restrained, still have a lovely gem-studded quality. In the watercolor of Bilbo escaping Mirkwood by riding a barrel down the river, it’s as if each sapphire eddy or emerald bough were a jewel painstakingly set into the landscape.

The bright and saturated palette is surprising for viewers who have had the Peter Jackson filmic Lord of the Ring impressed on their imagination. For all the meticulous design of the movies, they present a more earth-toned Middle Earth than, it seems, Tolkien imagined. Blogger Joseph Manola pointed out that the colors of the somewhat Tolkien-derived roleplaying game Dungeons and Dragons are now dulled to grays and browns, whereas early editions of the game’s materials described blue-haired, purple-eyed ogres and silver-haired, purple-cloaked elves. Perhaps all fantasy worlds grow a touch muted with age.

And what of that road that goes ever on and on? It is the perfect image of Tolkien’s lifelong and nearly obsessive drive to craft “a mythology for England.” The exhibit suggests that basically everything Tolkien did or learned quickly became part of his mythopoetic endeavors. A poem and illustration Tolkien made at the Cornish coast became a song of Elrond’s grandfather in The Silmarillion. The story he told his children at bedtime became The Hobbit (somewhat to the original audience’s dismay, who felt their story had been purloined). Even the designs he doodled on newspaper scraps as he worked on crossword puzzles were reinterpreted as Numenorean sigils.

To Tolkien, everything was fodder for what he sometimes called his “legendarium,” the body of work we think of as “Middle Earth” that began as a setting for flights of philological fancy and expanded into a many-thousand-year history. Tolkien was the first Tolkien geek. Maybe his own all-consuming fixation partly explains why his works have sustained generations of enthusiastic fandom and scholarship.

Or maybe the important thing was the alchemical mix between the two Tolkiens on view in the exhibition: Tolkien the psychedelic watercolorist and Tolkien the professor, painstakingly charting how long a Hobbit could walk in a day. British blogger Andrew Rilstone put it best: “[Tolkien] was both the hyper-romantic public school boy, drinking tea in a department store with three close friends (two of whom won’t live to see their 20th birthdays), producing ecstatic, hallucinatory poetry […] But he was also the old scholar, desperately chipping away at a book which is already a bestseller in order to make the phases of the moon fit together. It’s as if the young schoolboy and soldier had seen Middle-earth and the old academic was struggling to make it real.” Tolkien’s mythology, with its piercing songs and detailed language trees, seems like too much for one man to produce. Fortunately for us, Tolkien was no one man.

Observing this all raises the question: Given his preoccupation with a sprawling fantasy world spilling out of his head, how did Tolkien not become insufferable? The exhibit offers a few clues. Firstly, it seems Tolkien was the farthest thing from an egomaniac. A plaque points out that Tolkien forgot to put his name on the typed manuscript of The Hobbit he submitted for publication. This could be read as simply an amusing oversight by an absent-minded professor, but I think it also speaks to Tolkien’s humble sense that he was merely a scribe sharing stories from an imagined reality, not a grand auteur.

Secondly, the exhibit points out that the writing at the heart of Tolkien’s fame was something he fit around the primary affairs of his life: his academic work and family responsibilities. The Lord of the Ring was written over twelve years of nighttime work crammed in after teaching, meetings, air-raid duties, and what seems to have been a full and happy household life. Some of the most touching items on display in the exhibit chart the course of Tolkien’s marriage and fatherhood. We see the account book of kisses dating from Tolkien and his future wife Edith’s engagement—to motivate himself to study more zealously during his sometimes distracted college days, Tolkien arranged with Edith to get one kiss for each hour he worked. And we see photos of Tolkien with their children, and even a watercolor Tolkien executed to help exorcise the nightmare owl “Owlamoo” that haunted his son Michael. Apparently putting the monster down on paper helped to tame it.

Tolkien’s grace notes of humility and familial devotion may have been fostered by something the exhibit only glances at: his Catholicism. The fact of Tolkien’s faith offers a leaven to his worldbuilding zeal. The moral dimension of his art, where mercy can matter as much as strength of arms, elevates it over subsequent heroic fantasy that imitates its trappings. And, since Tolkien believed in death, judgment, heaven, and hell, even a lifelong project of multimedia artistry could not be the ultimate concern of his life.

In a long, fascinating letter displayed near the end of the exhibit, Tolkien specifies in a parenthetical that Middle Earth is “Mythical, not allegorical: my mind does not work allegorically.” Be that as it may, Tolkien did write at least one allegory: “Leaf by Niggle,” a story of an obsessive painter fixated on depicting a beautiful Tree, who finds he must add more and more background for the Tree to make artistic sense. He tacks on all his other works to the canvas of the Tree, but his quotidian duties, including helping a well-meaning but grating neighbor, keep him from ever completing it. (It’s hard not to draw the connection here to the large map of Middle Earth in the exhibit, one which Tolkien had endlessly reworked and tacked together from various pages, and which even features a hole accidentally burned by Tolkien’s pipe right near the Entish lands.) Niggle must depart on a great and unavoidable journey, leaving his Tree painting unfinished—but, after some trials and tribulations, he finds himself in the country of the Tree, and the neighbor he once begrudged joins him there. Together, they beautify the Forest. At last they set off for the far-off Mountains, previously only faintly glimpsed in the painting’s background. Even the best things in this life, the story suggests, are necessarily incomplete, mere hints of undying lands elsewhere. But the road goes ever on and on …

It’s impossible for any human being to make a world. But, in no small part thanks to Tolkien, we’re going to keep trying. Perhaps he came the closest of all fantasists and speculative linguists and cartographers of Faerie to genuine sub-creation. And maybe the greatest miracle is that he wasn’t driven mad by the process.

Alexi Sargeant is a theater director and cultural critic who writes from New York City.