Varieties of the British Right 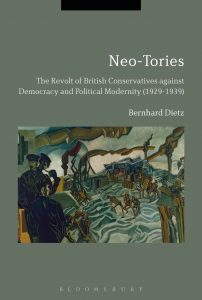 One could easily suspect that a book with the title of Bernhard Dietz’s Neo-Tories: The Revolt of British Conservatives against Democracy and Political Modernity (1929–1939) would either caricature traditionalists opposed to liberal democratic ideology as virtual Nazis or else expound the considerable differences between British traditionalists and all forms of fascists.

Instead it does two other things. The first is to provide a superb and balanced account of those schools of inter-war British political thought that combined elements of both conservative and centralizing authoritarian principles and which, thanks to the latter, openly sympathized with limited elements of fascism while rejecting fascism as a whole. The second is largely to confuse those schools of thought with others that were in fact committed either to the spirit of the decentralized, truly conservative traditionalist order that existed prior to the rise of liberal democratic ideology or else claimed that society as a model for the implementation of what was in fact the agenda of the late Victorian radical left.

Dietz’s reason for this is simple enough. By the end of the First World War the British “right” was very different from the loose alliance of High Tories (who favored a strong monarchy) and the more conservative Whigs (who believed that English law, prescriptive tradition, and practicality demanded a strong parliament) that had coalesced to defend Europe against the French Revolution, had come to he called “Tory” thanks to their shared philosophical traditionalism, and finally, in 1834, formally founded the Conservative Party to defend the (“unwritten”) British constitution against the rise of democratic ideology. Though the Conservative Party may (largely) have maintained, as a matter of philosophical doctrine, that only law, tradition, and practical considerations (rather than a natural right to vote) could justify the democratic participation of the bulk of the populace in national government, it had begun, in the second half of the nineteenth century to vie with the Liberal Party in the race to be at the forefront of expanding the electoral franchise. British politics had effectively shifted from a debate over whether to democratize to debate over why democratization should take place.

During the inter-war decades with which Dietz is concerned, the dominant wing of the Conservative Party was committed to nothing better than implementation of a moderately “progressive” agenda by traditional elites. It was in this atmosphere that no fewer than four schools of thought began not only to aggressively challenge the Conservative Party’s recent history of support for democratization and of a “progressive” agenda but to claim the mantle of the seventeenth-century English royalism that had evolved into the original Tory party—and to advocate restoration of the monarch to the central place in the wielding of real political power. Strong support for England’s cultural traditions was another defining element.

Dietz considers these common characteristics a sufficient basis for categorizing all four groups as “neo-Tory.” But this is not quite right, and it is necessary to look more closely at these groups, which he largely sees as a single movement. Perhaps a better catch-all term for two of them is “right-authoritarian.” These groups favored what was in many ways a very modern centralizing state, one that would use state power to defend the traditional hierarchies whose destruction had been intended by the leftists who had initiated much of the eighteenth and nineteenth centuries’ rapid centralization of politics. Their goal was to have England governed primarily by a monarchy whose powers would match the popular image of “absolutism” rather than the generally more modest reality of the governments to which that term is applied. Prior to Mussolini’s shift from rivalry with Hitler to collaboration, the two groups in question tended to hold a broadly though far from unreservedly favorable opinion of the Italian dictator.

Both were, from the beginning, opposed to the more brutal aspects of the Nazi regime and saw Hitler as an uncouth thug and both became committed to the fight against Hitler as the Nazis’ domestic brutality and international belligerence became increasingly obvious. But it was not uncommon for the initial attitudes of those associated with a more secular form of English right-authoritarianism to have been only broadly, rather than unreservedly, critical views of Nazi Germany (an inverse of their initial attitudes towards Fascist Italy) and to be open to some form of cooperation with the former on the basis of the type of pragmatism that motivated the western Allies to cooperate with Soviet Russia during the subsequent war.

Dietz, to his credit, accurately distinguishes between Christian-oriented and secular variants of right-authoritarianism and lays considerable emphasis on the differences between such forms of right-authoritarianism and fascism. He correctly points out that while racist and eugenicist doctrines were common within the secular variant they were largely abhorrent to those who embraced the Christian one, but he also shows that the secularists did not take such doctrines to the same extremes as the Nazis did and, though sometimes inclined to treat supposedly “inferior” races as weak and irresponsible children, were entirely opposed to Nazi violence towards them. That fascist populism, including that of Oswald Mosley’s English variant, was anathema to England’s elitist right-authoritarians is another important matter on which Dietz is quite explicit.

That English right-authoritarians did not wish to proceed from authoritarianism to totalitarianism, and that their support for a martial culture did not equate to a Nazi-like desire for aggressive war are points that do not receive the type of clear and fairly consistent stress as the points mentioned in the above paragraph. but I can recall nothing in Dietz’s book to suggest that this is anything other than an oversight.

More problematic in his treatment is Dietz’s failure to distinguish between the right-authoritarians and two other schools of thought whose representatives he classifies as “neo-Tory.” The first of these were traditionalist conservative High Tories. Admiring the English royalist tradition, they favored a stronger monarchy on the grounds of national tradition and because the expansion of parliamentary power and of democracy had (largely) developed in conjunction with increasingly centralization. Committed to the belief that the form of government (monarchy, democracy, and so forth) was a question of legality, convention, and practicality, they were critical not of democratic forms of government as such but only of ideological liberal democracy. Such a belief was diametrically opposed to support for monarchism on an authoritarian basis and to the right-authoritarians’ frequent broader hostility to democratic forms of government and tendency toward autocracy.

Attitudes towards the Spanish Civil War demonstrated these differences, to which Dietz calls attention but whose full implications he gives little indication of appreciating. T. S. Eliot, for example, refused to publicly take sides on the conflict in Spain, believing Francisco Franco’s nationalists too discreditable to be endorsed despite believing them better than the leftist alternative. Evelyn Waugh, with his typical pugnaciousness, publicly declared both that Franco was the lesser of two evils and that he was happy not to live in a country where he would have to choose in Franco’s favor. He later satirized the Franco regime in Scott-King’s Modern Europe. That was the difference between traditionalist High Tories and right-authoritarians in a nutshell. To many right-authoritarians the Franco regime was a model political order. To High Tories right-authoritarianism could never rise above a more tolerable form of modern centralization.

Another viewpoint Dietz fails to appreciate is that exemplified, in the inter-war era, by Hilaire Belloc, whom Dietz treats as a simple conservative. In fact, however, the tradition of thought within which Belloc stood was a form of Victorian radicalism that had seen the medieval guild system as a prototype for socialism. Belloc himself rejected socialism as such but maintained that tradition’s combination of radical leftist concerns with admiration for medieval social, political, and economic models. He even argued that medieval-style monarchy was actually a strongly egalitarian political order and attempted to justify it on the basis of Rousseau’s theory of the “general will.”

Such shortcomings are all the more unfortunate because most of the content of Neo-Tories could have made of a truly exemplary work, if only it had been either written as a study of interwar English right-authoritarianism or as a more nuanced assessment of all the foregoing schools of inter-war English thought. As it is actually written, the book is highly useful, but only for those with the knowledge necessary to distinguish between the areas in which it is authoritative and those in which it is not.