What Makes a Life 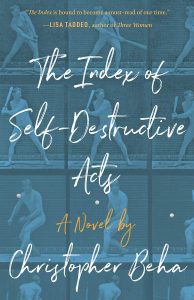 This is a story that begins with the end of the world. As a young man named Sam Waxworth arrives from “the provinces” to start his new up-and-coming job in New York City, he watches a long-bearded, seemingly fanatical Herman Nash proclaim that the world will end on November 1. “What would you change if you knew it was all going to end?” Nash asks a crowd of strangers, and the question echoes over the course of the novel, both for the various characters, whose stories intertwine, and for the reader. For a world that no longer believes in a world beyond the world or meaning beyond this reality, only an apocalyptic novel can unveil any significance to our stories. Chris Beha’s The Index of Self-Destructive Acts is a behemoth novel that can be read surprisingly quickly because you will find yourself ignoring your children’s pleas for dinner to keep reading it (or camping out on the bathroom floor to not wake your sleeping spouse as you stay up until 1 A.M. to finish a chapter). And, it is the kind of novel that is worth all the loss of sleep—its questions are resonant, its perspectives are varied, and its world is ours.

One of the first things I noticed was how prescient this book seemed. Set in 2009 but published in 2020 during our cancel culture, the story opens following the downfall of a major public intellectual, Frank Doyle, over a racist joke that he made publicly about President Obama. Readers do not have to stretch their imaginations to cast judgment or feel empathy with this character. His declining trajectory comes to cross with Waxworth’s ascending star. When Waxworth is assigned to write a piece on Doyle, the two meet at a baseball game because Waxworth has been asked to write a redemption story on the fallen writer. Doyle is old hat; Waxworth is becoming a bit of a celebrity. But, more than the labels made by their reputation, the two offer contrasting worldviews about life. While Doyle has spent his career experiencing baseball via his poetic imagination—exalting the senses, unpacking metaphors, playing with the mystery and delight of the sport—Waxworth writes a column called “The Quantifiable World” and enters all the available data of the game to predict outcomes.

If you pull back the surface a bit, readers will find this story is setting these two perspectives against one another. Which viewpoint tells the truth about the world? Which leads to the good life? To greatness? In this sense, the book resembles Fyodor Dostoevsky’s Notes from Underground, from which it draws one of its two epigraphs. The 1864 Russian novella records the rants of an antihero, an Underground Man, who rejects the two possibilities offered to him by culture for who he is supposed to be—either a Romantic hero or an insect in the hive. Doyle’s daughter has bought into her father’s poetic outlook, contemplating a graduate career dissertating on Wordsworth or becoming a great poet herself. Whereas Waxworth would assume the “insect in the hive” mentality: “the greatest impediment to predicting the future correctly was the belief that the world held meaning.” We watch these characters self-destruct again and again as they limit themselves to the either-or; they are all acting like underground “men.”

“The Index of Self-Destructive Acts” is drawn from Bill James’s Historical Baseball Abstract and refers to “the total number of hit batsmen, wild pitches, balks, and errors by a pitcher, per nine innings.” Baseball becomes a metaphor for life. In the same way that pitchers can sabotage a game for their own team, people can repeatedly do the things they know not to do. Dostoevsky calls it nadryv. Beha describes it as our desire “to keep getting things wrong,” as his character Waxworth asks, “If we really learned from our mistakes, shouldn’t we make fewer all the time?” Neither the rationalist nor the romantic can account for the volatility and vitality of the human will.

In Notes from Underground, as the Underground Man volitionally destroys his life, he begs for a third way, a third option (that the Russian government censored from the novel) that Dostoevsky said would be Christ. Beha’s novel is not Christ-haunted, not even God-haunted, but religion-haunted. The third way is so far removed from our memories that we only see the vestiges of religion around us: the apparently disturbed Nash proclaiming the end of the world from the street corner, Frank’s wife Kit turning to her father’s Catholicism by praying rosaries during crises, or Doyle’s protégé Justin who diligently drives his mother to her church on the “wrong” side of town each Sunday. While all of these characters are searching desperately for meaning, the thought of the Bible being true or the Christian faith being real embarrasses each of them. Without a higher purpose, the freedom of the will makes no sense.

The book’s deadline is set from the opening page—November 1. As the deadline approaches, the tension builds. What will Nash’s foretold “Great Unveiling” reveal to these characters, and to us? In the opening line, Sam Waxworth wonders, “What makes a life … self or circumstance?” These questions cannot be quantified; it takes a novel to get at the answers. Thankfully, that’s just what Beha has once again provided.

Jessica Hooten Wilson is the Louise Cowan scholar in residence at the University of Dallas, and the author of three books. Most recently she co-edited Solzhenitsyn and American Culture.