What Makes the Midwest Midwestern? 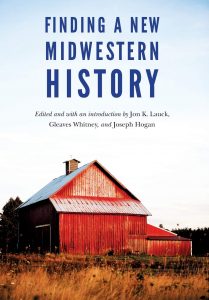 The field of Midwestern history is in the midst of an exciting renaissance as scholars rediscover the long-neglected history of the region too often dismissed as “fly-over country” or mocked as a cultural and economically stagnant “heartland.” Scholars of the Midwest have chafed at those stereotypes but until recently have been hard-pressed to offer a coherent response that defines the Midwest that does not also draw on enduring stereotypes of bucolic small towns, grain elevators, and decaying factories. This volume provides that much-needed response by firmly asserting the relevance of the Midwest, both past and present.

The origins of this book lie in the 2015 “Finding the Lost Region” conference held in Grand Rapids, Michigan, which brought together members of the new Midwestern History Association to present research on—and debate the future of—the Midwest. The fruits of that conference are presented here: twenty-one chapters on diverse topics organized broadly into six categories: “The Midwest as a Region,” “The Midwest’s People,” “The Iconic Midwest,” “Midwestern Landscapes,” “The Midwestern Voice,” and “The Midwestern Experience.” Drawing on history, anthropology, geography, sociology, and literary studies, this work succeeds in demonstrating the importance of the Midwest and in its stated desire to “give life to a moribund field of study” (xii).

Arranged roughly chronologically, the chapters cover a wealth of topics. Many of the authors take a fairly conventional approach to the region—there are the customary chapters, for example, on Native Americans, European immigration, African Americans—but all are deftly written and provide a good overview of their topics and include the most recent scholarship. The greatest strength of this volume is the emphasis on cultural history. In addition to compelling chapters on Midwestern intellectuals and writers, several prominent academics have contributed chapters on their particular specialties. Jon Butler describes the role of religion in public life that refutes the persistent image of the spiritual landscape of the Midwest as little more than a sea of cranky Lutheran sects. John E. Miller writes about how memories of small-town life influenced much of the cultural output of the region, from Sinclair Lewis to Meredith Wilson, memories that no longer quite match reality. James P. Leary notes that great diversity of Midwestern music, a rich legacy now at risk from the homogenizing effects of mass media. These three authors in particular drive home the recurring theme of the volume: the Midwest contains a multitude of cultures and experiences.

Given this vast diversity, however, the central question remains vexing: what exactly makes the Midwest Midwestern? The most intriguing response is that the very concept of “the Midwest” is a fairly recent development. Architects, writers, painters around the turn of the twentieth century, fostered this self-conscious sense of region distinct from the northeast, the south, and the west. It was not as elitist as the northeast, as backwards as the south, nor as wild as the west. This sense of identity also embraced the region’s inherent contradiction: it was both modern and ancient, a region of both agriculture and industry, a place where conservative people embraced progressive politics and great innovators clung to tradition. The great conceit was that the Midwest was somehow the definitive America. Despite such confidence, this brief Midwestern moment passed quickly as the literary and cultural centers of America moved to the west coast and Deep South.

Indeed, that question of identity continues to define much of the new scholarship on Midwestern history. Finding a New Midwestern History does not offer a clear narrative history of the region, which might frustrate some readers, but the engaging essays it contains will no doubt inspire fresh interest. There are some neglected topics. There is very little about politics, a notable absence since the Midwest famously produced major liberal figures like Robert La Follette, Eugene Debs, Jane Addams, William Jennings Bryan, Adlai Stevenson, and Hubert Humphrey. Moreover, the region also embraced the Ku Klux Klan in the 1920s and produced some of the most conservative politicians in the early twenty-first century, a seemingly baffling contradiction. Yet all in all, the editors and authors deliver a rewarding excursion into a new field. Readers interested in the Midwest will come away with a greatly enriched appreciation for the region and will, no doubt, be inspired to ask even more questions than the book answers.