Why, and How, to Live 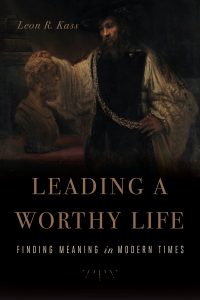 Leading a Worthy Life is in large part the intellectual and spiritual autobiography of one of America’s leading bioethicists. From his childhood in a secular family of Yiddish-speaking immigrants to his education at the University of Chicago and his teaching career at Chicago and other institutions, Leon R. Kass has led an exemplary life of scholarship and service. Along the way, the author has searched for knowledge of how to lead a worthy life and has found answers in books, experience, and traditions inherited from his parents and his particular culture. At the end, while still questing for greater knowledge, this fortunate man can say that he has found the answer to the question existence poses.

As something of a generalist, a physician who early in his career turned to the study of the humanities and social sciences, Kass is one whose curiosity extends beyond that of the typical academic specialist. As Kass writes, he is “an unlicensed humanist” who has “pursued the humanities for an old-fashioned purpose in an old-fashioned way.” Clearly, Kass has pursued this extraordinary quest with remarkable devotion: over a period of some seventy years, from his youthful education in what he calls menschlichkeit through his education in the sciences and medicine and over decades of studying and teaching the humanities, the author has pondered the question of what constitutes a worthy life. The result is impressive both in terms of the acuity of his particular readings of the Great Books and in a broader wisdom not directly gathered from reading. One senses that Kass, along with his late wife Amy A. Kass, who accompanied him in his life of teaching and writing, must have been a teacher in a sense now largely lost: one who shares the student’s newly discovered curiosity and who approaches his studies with the same lively interest in grand questions often lost sight of among specialists. Leading a Worthy Life is filled with evidence of just such a career.

Despite the progressive views of his parents, Kass comes across as a traditionalist in many respects. As a leading bioethicist, Kass has made clear his concerns over assisted suicide, abortion, human cloning, medical enhancement of humans, genetic programming of human life to extend longevity, and the prescribing of “pleasure-affording” drugs that might relieve the anxiety and emotional pain of everyday life. In Leading a Worthy Life and other books, Kass argues that what he views as an artificial means of avoiding pain may transgress the very core of what it means to be human: the acceptance of the limited nature of existence and the choice of facing adversity, including the pain and fear of dying, with nobility and courage. Anything less may result in a diminished and less than worthy life.

In what is perhaps the core of Leading a Worthy Life, the author presents a detailed and eloquent argument opposing a number of biomedical means, proposed or already in existence, of relieving life of suffering and of enhancing human abilities. One simple illustration helps to make the point: if all children in one’s community, though perhaps not in all communities, had access to interventions producing smarter, stronger, and larger human beings, would these human beings, as individuals, be happier than they were before they and their peers were “improved” by science? Would there not be unanticipated consequences, including the inevitable inequality of one class or nation availing itself of life-enhancing technologies while others grow up without them? Once such interventions have begun, is there any limit to what might become available, and if not, might we not end by altering human beings beyond recognition? In light of these and other considerations, is it not wise to err on the side of caution?

Even those who may disagree with Kass’s arguments must admit that he has devoted a remarkable degree of thought to these issues, and that his learning extends far beyond biomedical technology. Rather than simply warn of what to avoid, Leading a Worthy Life carries the reader far into a consideration of the positive means of achieving a happy and worthy life, a quest that leads beyond intellectual curiosity, important as that is, to a discussion of the worth of vocation, marriage, and civic participation. In what may be the crux of his argument, Kass stresses that “most Americans” still recognize the central importance of these aspects of life and carry with them a legacy of ancient moral teachings. In his review of this tacit understanding, however, Kass wishes to provide “an account of why and how our most worthy practices answer to our deepest human aspirations and longings.” Traditional moral knowledge is sound because it in grounded in fundamental and immutable elements of human nature.

One refreshing thing about Kass’s discussion of courtship and marriage, as of other topics, is its refusal to submit to the influence of fashionable theories, in this case the theory of “constructed” gender or the demand for gender equality in every particular. There may, after all, be tasks for which men and women are not equally suited, just as there are aspects of gender, both physical and emotional, that are innate and not “constructed.” Kass provides a sensible and convincing argument in defense of these innate qualities, and his view of courtship is striking because its traditionalism is deeply rooted in just this sort of thinking.

One must applaud Professor Kass and his late wife Amy for their lifelong effort to restore true intellectual curiosity to classrooms so thoroughly mired in ideology. Surely, as Kass asserts, it is true that the desire to learn is among the most important attributes that distinguish humans from other creatures, and a curriculum grounded in the dogmatism of identity politics does not allow for this curiosity. In a section entitled “The Aims of Liberal Education,” Kass sets out his conception of an undergraduate education based on “open-mindedness and respect for the opinions of others” accompanied by intensive reading and discussion of the Great Books—an education that reflects what one associates with Kass’s own beloved University of Chicago. This account of liberal education, and of the “great-souled man” that it intends to produce, is admirable but perhaps limited in its applicability.

The pursuit of knowledge, as Kass often remarks, is a “quest” that must always remain open to revision and new insight, and nowhere is this more pertinent than in regard to his lengthy discussion of the issue of assisted suicide. Kass has spent many years pondering this issue, and his pursuit of answers rests on enormous reading of classic texts, medical literature, legal studies, and philosophical and religious writings. Kass’s reputation was such that he was chosen to head the President’s Council on Bioethics under President George W. Bush. With eight states having approved assisted suicide and others considering doing so, what the author has to say is certainly worthy of consideration, even by those who may disagree with his conclusion that only under rare circumstances should assisted suicide be approved. In the course of arriving at this conclusion, Kass dismisses contemporary notions of rights-based and utilitarian ethics and positions the issue in the context of an understanding of human finitude, especially the possibility of ennobling one’s life by dealing courageously and faithfully with the burdens of declining health and the pain and fear that often accompany old age.

It may be more difficult to accept the author’s arguments concerning the use of treatments that might alleviate pain and extend life. Although Kass does not discuss this literature in depth, a great deal has been written about the potential for human life to be extended, and extended without chronic disease or pain, well beyond conventional notions of human life expectancy. Books like The Longevity Diet by Valter Longo, The Dream of Eternal Life: Biomedicine, Aging, and Immortality by Mark Benecke, and Lifespan: Why We Age—And Why We Don’t Have To by David Sinclair, along with countless popular books on the subject of health and rejuvenation, promote the very different idea that happiness should be measured not in nobility, goodness, or courage but in sheer longevity and disease-free years. This materialist conception of life’s purpose is one that Kass finds especially troubling but clearly one that has attracted a large following of readers.

In the course of an autobiographical chapter detailing his intellectual development, Kass writes of how his reading and study led him ultimately to an appreciation for the Hebrew Bible, “the source of my parents’ teachings of menschlichkeit.” In several sections late in the book, Kass provides a profoundly thoughtful analysis of biblical conceptions of Creation, the Ten Commandments, the Sabbath day, honoring one’s parents, and other matters. The biblical conception of the Sabbath as a day of rest—“this mysterious blessing and hallowing of time ‘beyond’ the world of creative making”—has crucial implications for our understanding of the created world as a place of goodness and freedom. Since Sabbath observance is a ritual available to all, it also opens up a vision of political equality: all men are entitled to respite from labor, even from the “internal” despotism of those too strongly attached to economic gain.

It may be that at times the author overstates his point or that the solutions he offers are less than convincing. His proposal of a sort of GI Bill to encourage young women to postpone entering the workforce so as to nurture children at home is just one example. Likewise, one may question his views on “the full human and social meaning of sport,” with athletic stadiums veritable “cathedrals” for the “worship” of heroes. As one who has no interest in spectator sports, I would respond that sports are just sports, and that there are more worthy heroes for one to worship. Still, Kass’s arguments are always thoughtful and original, as for example his defense of patrilineal surnames, which, he states, “are, in truth, less a sign of paternal prerogative than of paternal duty and commitment” or, as throughout his discussion of biomedical enhancements, his defense of a conception of “finitude.” Leading a Worthy Life offers a great deal that will stimulate the thinking and add to the knowledge of almost any reader, and his warnings that “the activities of human life may come to be seen in purely technical terms” or that having gained a long and painless existence, we may realize “it is vastly less than what we really wanted” are well worth heeding.

Read as one man’s experience, Leading a Worthy Life is a compelling account of a remarkable intellectual journey. It is heartening to peruse an account of the humanities that so completely avoids the jargon-ridden and pointlessly abstract expression of so many academic texts. Even those readers who disagree with Kass’s conclusions will come away from this book feeling that their ideas have been treated fairly and with respect, and they will find that they have learned much from this humane and knowledgeable author. Leading a Worthy Life is not the final word on any one topic, but it is a valuable contribution not just to appreciating several of the most pressing moral issues of our day but, perhaps more important, to understanding the manner by which each reader can conduct his own pursuit of the worthy life. Leading a Worthy Life is a book that addresses the central questions of human identity and purpose in a highly thoughtful manner, and as such it deserves to be widely read and discussed.