Why We Want Freedom 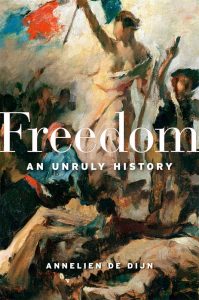 Chances are, anyone who took an introductory course in political theory learned something of the difference between “positive” and “negative” liberty, or as Benjamin Constant termed it, the “liberty of the ancients” and the “liberty of the moderns.” The former is the liberty of a people to govern itself, often associated with democracy. The latter is the freedom from government interference in our private lives, often associated with limited government.

Annelien de Dijn has written a sweeping history of the Western concept of freedom largely on the basis of this distinction, though unlike Constant, she expresses her preference for the ancient, positive variety. Freedom: An Unruly History is an entertaining and enjoyable read, spanning from the ancient Greeks to the twentieth century. It offers a survey of the ways Western civilization has articulated the concept of freedom interspersed with colorful anecdotes—some familiar and others less so—to illustrate the ideas.

A book-length treatment of the evolution of freedom in the West is a wonderful opportunity to examine how the conceptual relationship between these two types of liberty has played out over the course of history. And de Dijn correctly shows that freedom was rarely seen solely as a matter of minimal government. But her thesis is simplistic and unconvincing. Out of a desire to promote ancient, positive liberty, she shoehorns almost every ancient thinker into a simple democratic framework, except for those few, like Plato and the “Old Oligarch,” that are utterly impossible to characterize as democrats. Along the way, she avoids any deep discussion of the rich tradition of the mixed regime. Limited government, rule of law, and constitutionalism were largely “invented” (a word used regularly to stress the novelty) in the nineteenth century by reactionary elites looking to protect their privileges and wealth from the newly liberated masses.

This “redefinition” of freedom, de Dijn claims, was wildly successful and the Western world now exclusively sees freedom as limited government—while a better, ancient version is waiting to be rediscovered.

An uncertainty hangs over de Dijn’s work that gives rise to many of its flaws: Why do people want to rule themselves? Typically, the ancient answer to this question involved a commitment to communal self-government—the citizen was committed to and at least partially defined by the city, and ruling together with other citizens was itself good, aside from any personal benefits that may come from it. But de Dijn somewhat surprisingly does not emphasize this view. (This is probably because the value placed on self-government was tied to the cultivation of certain virtues—a topic de Dijn avoids like the Athenian plague.) Rather, she suggests that collective freedom was good in large part because it offers the guarantee of “personal security”:

It is sometimes claimed that the ancient Greeks had no interest in individual independence, only in the collective freedom of the community to govern itself. But writings by Herodotus and others let us see that they believed freedom—or the ability to control the way we are governed—was also crucial to the preservation of personal security and individual independence.

To complicate matters, however, she later describes French Revolutionary democracy (which is presented as an “ancient” form of freedom, largely ignoring the important ideological characteristics that defined and distinguished such modern movements from ancient democracy) in communal terms: “a government based on the sovereignty of the nation.”

It is not entirely clear, therefore, why ancient liberty is so important. This freedom is not the ability to enjoy “private independence” or one’s property (these ideas are emphatically placed in the category of “modern” liberty), but she nevertheless presents it as centered on the individual in some way—communal self-government is important for its ability to unlock some kind of personal freedom that cannot be had without it. There is something vaguely Rousseauean about it all: The individual is naturally free to govern himself and answerable to no one, but this condition can only be approximated by participation in a purely democratic state that empowers the authentic will of its citizens.

Given her awareness that self-government is at least partially motivated by the desire to live one’s own life, one would think that de Dijn would be sensitive to potential linkages between self-government and limited government—after all, if we are concerned with personal independence of some form, certainly limiting what others (including the government) can do to us would be part of the solution.

She should have been particularly interested in addressing the challenge posed by those thinkers who were concerned with majority tyranny: If democracy is the key to some form of personal independence, then surely we must show why the rule of the mob is not a threat. (And if the French Revolution was the glorious flower of ancient liberty, then ancient liberty has some big problems.) But while she mentions these theories, there is no significant grappling with the problem. They are simply dismissed as the product of the privileged class’s fear of the common man.

De Dijn, though, may actually be on to something in her refusal to choose either the personal or the communal rationale for self-government: Both factored in the ancient conception. Consider Aristotle’s comment that people will often put up with a tyrant so long as “no one prevents them from working, or takes away anything from them.” But this insight should lead us to recognize the conceptual linkages between self-government and limited government, a topic de Dijn avoids.

One might articulate at least two such linkages: First, as Aristotle’s observation suggests, at least one reason that the common man wants a say in government is because he does not trust that rulers will rule over him justly. If you are afraid that those in power will use it to take away your property or otherwise interfere with your private life, one obvious step would be to demand a say in government. So when the common people are oppressed by an oligarchic few, the natural desire is to implement a more democratic form of government to check the power of the elite.

The second linkage looks at the relationship from the other side and leads us to something almost completely overlooked by de Dijn: the tradition of constitutionalism. If you are genuinely concerned about communal self-government, limiting government (usually by dividing power) is essential. Aristotle, Cicero, Montesquieu, Burke, the American founders, and any number of other contributors to the tradition of Western constitutionalism recognized that a given community consists of different parts with different virtues and different needs. If a polity is governed by just one of these parts—minority or majority—and if its power is unlimited, it cannot truly be said to be communal self-government, but the government of one part over another part. This is the insight of the majority-tyranny thinkers which de Dijn fails to address. As such, constitutional regimes check power and limit government in an attempt to ensure that its actions are, indeed, actions for the whole—not for a part: Self-government needs limited government.

And so, in the tradition of the mixed regime, ancient and modern polities have been governed by complicated constitutions which reflect the society in a number of different ways, a process which checks and limits any given part. Take Rome as just one example. De Dijn devotes a lengthy chapter on Rome, but never comments on the importance of its complicated constitutional structure (except, of course, to acknowledge its exclusionary characteristics). The Roman republic took the sense of the whole through Tribal Assemblies, which voted by blocks in thirty-five largely arbitrary tribes; through the Plebeian Assembly, which excluded patricians and voted on law for plebeians only; through the Comitia Centuriata, in which citizens were broken into groups based primarily on wealth; and through the aristocratic, patrician-exclusive Senate. From these bodies were elected, along with a host of other magistrates, two consuls possessing a mutual veto, and ten tribunes of the plebs possessing a veto on all acts of other magistrates. In the assemblies, a magistrate was required to introduce legislation, which the people then approved.

Such a complicated framework was filled with overlaps and checks, and its defenders, like Cicero, believed that it not only checked power and protected the various classes, but conciliated all to the rule of the whole. It served to produce a kind of harmony among the conflicting portions of the community, which amounted to “an agreement on law and community of interest” that was a more genuine form of self-government than the simple rule of the many.

It is not surprising, then, to see that de Dijn pays no attention to the parallel developments of common law constitutionalism and parliamentary government. This further leaves an intellectual vacuum that allows her to lump the American founding—revolution and constitution—with the French Revolution as simply a struggle for pure democracy.

The problems and missed opportunities noted above might be the result of two false equivalencies made by de Dijn: equating positive liberty with pure democracy, and equating limited government with minimal government. The first causes her to largely elide over the rich history of the mixed regime, sometimes lumping it into the category of ancient liberty (as with her discussion of Cicero), and other times lumping it into the category of modern, negative liberty (as with her discussion of Burke, James Mackintosh, and others). It also causes her to make claims that strain credulity, like her attempt to present America’s founders as ancient democrats. For instance, the idea “that the United States is a republic and not a democracy, and that there is a crucial difference between the two,” she says, was “invented by thinkers such as William Graham Sumner.” Don’t tell James Madison.

The second false equivalence is what makes the thesis remotely plausible. Robust theories arguing for minimal government and substantive, absolute limits on the power of the state are, indeed, modern phenomena. And it should be noted that de Dijn’s analysis is much better (though also less entertaining) once the story reaches the nineteenth century. But with a more thorough understanding of the history of constitutionalism, one could begin to see that many (though admittedly not all) of these theories were not pure “inventions.” Rather, they were outgrowths of and attempted justifications for rights against government that had already been long-established. The push for minimal government as a theoretical ideal was made possible in part by the fact that limited government, as a practical and constitutional reality, had been embedded in the Western tradition for centuries.

Failing to recognize the conceptual linkages between limited government and self-government, moreover, also makes it easier for de Dijn to speak of our contemporary landscape in overly broad strokes. It is probably true that more people think of freedom as protection against the state, but at a time when at least one American political party thinks waiting in line at a polling place amounts to a brutal suppression of sacred liberty, it’s hard to say that democracy doesn’t still factor in the picture. The reality is that we continue to search for a balance between the two freedoms, even as ideologies on various sides try to impose narrow definitions.

Referencing Richard Price’s revolutionary sermon attacking England’s mixed constitution, Burke sarcastically remarked that “Before I read that sermon, I really thought I had lived in a free country; and it was an error I cherished.” One might have a similar reaction after reading Freedom, which seems intent on convincing readers that a venerable tradition of liberty is actually not liberty at all, and we’ve been in chains this whole time.