Why We’re All Playing Identity Politics 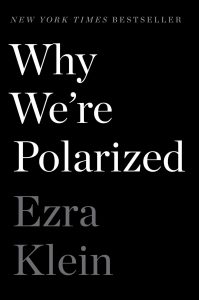 Ezra Klein—the political journalist, blogger, former cable news host, co-founder of Vox, and current editor-at-large thereof—has published his first book. Those who have followed Klein’s work will be little surprised by its general structure, style, or methodology. Excellent writing and a jovially self-deprecating tone are accompanied by a large body of outside research. Those who have only come into contact with his work through the refraction and detraction of the Internet, however, may be surprised with both the nuance that often characterizes Klein’s approach and his winsome combination of deep beliefs yet lack of rigid ideology.

As a thinker and writer, Klein has several distinctive strengths: he is able to digest enormous amounts of information, he is able to think clearly and effectively in systems, and he is able to have excellent and intellectually stimulating conversations with a diverse array of people. This last trait is most visible on his podcast, where Klein, an unabashed contemporary liberal, speaks with guests including Patrick Deneen, David French, Rod Dreher, and other denizens of the conservative intellectual scene. He purports to have learned from them, saying in an interview that the critique of the left most persuasive to him comes from “religious-oriented political theorists” such as Deneen and Ross Douthat. They have convincingly articulated that “a society in which we’re really just focused on individual flourishing,” defined by “whatever individual people want to do right now,” without regard for “the context in which they operate, or the people around them, or tradition, or anything else … [is] going to create a society of lonely, anxious, disconnected people.”

Their influence speaks to the problems with a simplistically progressive account of human nature, what Deneen called “self-making selves,” and is visible in the book as Klein wrestles with the slippery subject of man. He aims to establish his model of politics on “a more rigorous account of human nature,” which takes the form of a brainchild between Jonathan Haidt and David Remnick with a splash of Alasdair MacIntyre’s critique of the Enlightenment thrown in.

The book is divided into a first section, which lays out Klein’s theory of man and his theory of recent American history, and a second section that discusses “institutional feedback loops,” or what operates today to maintain or increase polarization.

Klein’s description of our social-political nature echoes the famous Hegelian line that “all politics is a struggle for recognition,” and explains the title of this review: in Klein’s telling, “everyone engaged in American politics is engaged in identity politics. This is not an insult, and it’s not controversial.” By this he means that identity, rather than ideology, is often the driving force of our politics, and far more identities affect our politics than we might think. Klein bases this claim on a fairly impressive survey of the last fifty years of social-psychological literature. This review begins with Henri Tajfel, whose first study was intended to establish a baseline at which arbitrarily assigned groups would not practice in-group favoritism and out-group hostility—he was unable to do so. No matter what the discriminatory principle (which was always arbitrary and often false), two groups of demographically identical boys became unfriendly towards one another as soon as they were sorted, and Klein assures us that “Tajfel’s results have been replicated repeatedly, in all sorts of conditions, deploying all sorts of group identities.”

A bevy of similar studies—including one that demonstrates that the average (a crucial word) Republican or Democrat is much less committed to particular policies than they are to the label “Republican” or “Democratic,” and another suggesting that intelligent and politically engaged people are no better at eschewing motivated reasoning, and, in fact, their intelligence may make it easier for them to fool themselves—strengthen Klein’s case. What keeps him from merely repeating now-worn verities about our irrationality is that he does not hold this to be, in any simple way, a display of irrationality; rather, he suggests that, by, and large, the American political system “is full of rational actors making rational decisions given the incentives they face.” Klein helpfully cites the systems-thinker Sidney Dekker to distinguish between broken systems wherein one part is at fault and broken systems wherein the parts all work well enough, but the internal logic has gone awry. Worryingly, American politics follows the latter.

But if this is how humans are wired (and the evo-psych, social-psych, and occasional works of philosophy that Klein surveys make a fairly persuasive case that we are), why is particular polarization a feature of the present, and not just the norm?

The answer, Klein posits, is “a story, as are so many in American life, that revolves around race.” In his framing, the mid-twentieth century was less a struggle between two parties than among four; the Republican party had both liberal and conservative factions, and the Democrats had a northern liberal contingency and a Dixiecratic Southern one. The passage of the Civil Rights Act, and the broader social movement that accompanied it (along with the reactions, in the form of Nixon’s “Southern Strategy” and Barry Goldwater) pushed conservative Dixiecrats into the Republican Party, as many of the more liberal members of the Republican party, coupled with generational change, became Democrats.

Here enters another important idea for Klein, the concept of “mega-identity politics.” Whereas Republicans and Democrats were quite similar in the mid-twentieth century, both ideologically, and in terms of identity, Republicans and Democrats today are starkly different. Republicans are conservative, religious, generally white. Democrats, by contrast, are liberal, often secular, and a much higher percentage are nonwhite (9 percent of self-identified Republicans to 43 percent of self-identified Democrats). Klein critiques a well-known idea of President Obama, wherein the former had suggested that in daily life—in sports, social clubs, and the like—Americans are not as polarized as they are in their politics. Klein observes that, in the era of Colin Kaepernick and Nike commercials, even fan attitudes towards the NFL have become remarkably polarized, as Republicans come to view it less favorably than Democrats. Whether that distaste will endure after Kaepernick leaves the Zeitgeist is an open question, and one that Klein does not thoroughly address. Nevertheless, it speaks to the question of “mega-identity” by demonstrating that even our sports preferences can, in fact, carry political weight. Altogether, “those merged identities have attained a weight that is breaking our institutions and tearing at the bonds that hold this country together.”

Those bonds are tearing because American democracy does not handle polarization well. That may seem obvious, but the modifier “American” does important work in that sentence; other democracies, on account of their parliamentary structure, are more able to handle it. Klein follows the analysis of Spanish political scientist Juan Linz in suggesting that “systems based around an independent president tended to dissolve, as conflicts between the executive and legislature were often irresolvable, and irresolvable conflicts end in crisis and collapse.” America is the exception, but in a worrying rather than inspirational way. That is to say, most other political systems of our structure have collapsed, and it is far from clear that we are immune from such an outcome. What worked quite well when our founders wrote the Constitution, and our loyalties were more tightly bound to state and local society than to party and national president, can break down when politics become totalizing and conflict between branches of the government becomes entrenched.

Klein’s discussion of Mitch McConnell and Merrick Garland is astute here. He makes the point, perhaps surprising to many on the left, that McConnell had not obviously done anything wrong. Indeed, he acted very reasonably, given the system he was in and the incentives he faced. That does not mean that McConnell’s choice was not a departure from the past, but rather that the logic of the past had lost its luster. Klein observes that “both McConnell and Obama represented legitimate electoral majorities, and there was no obvious way to resolve their differences.” This departure from political norms, which is caused by both parties (though Klein follows Norm Ornstein and Thomas Mann in assigning more blame to Republicans), has the effect of polarizing the electorate, which then further polarizes the elected officials, and so on. This is one of Klein’s “institutional feedback loops.”

Another loop, and one about which Klein speaks with insider knowledge as well as his usual set of studies, is the social/traditional media and technological environment. He describes the dramatic increase in entertainment options over the past forty years and suggests that “this is the context in which modern journalism is produced and absorbed: an all-out war for the time of an audience that has more choices than at any point in history.” What tends to attract attention in crooked creatures like us? That which generates outrage, confirms groupthink, and posits social threat. Tucker Carlson is far more attention-grabbing than Walter Cronkite ever was, in part because Carlson is competing against far more alternatives than Cronkite was. Carlson is also pitching to a much more polarized audience than Cronkite was. Correspondingly, Carlson polarizes more than Cronkite did, which generates a greater demand for Carlson-esque content, and so on. Markets are quite good at getting us what we want, Klein seems to intimate, and that isn’t always what’s good for us or for our democracy.

Klein’s goal is more to offer a better framework for thinking about politics than to posit a set of solutions, and that shows in the comparative allocation of space and thought. His last chapter does offer some genuinely good ideas, including a recommitment to local politics and better management of ourselves and our identities online and in-person. More controversial ideas involve the elimination of the filibuster and a restructure of the funding process to avoid defaulting on the debt ceiling.

Overall, what are we to make of this wonkish book? There is no question that Klein simplifies, and no question that his simplifications tend to malign the American right. One such example is his discussion of Jennifer Richeson’s excellent work on identity and political beliefs: in her interview on his podcast, she explicitly notes that the tendency to respond conservatively when faced with the prospect of unfavorable demographic change is trans-group; that is, every racial, or ethnic group tends to think this way. This oversight is especially disappointing as a more nuanced recount would only strengthen his fundamental claim, that is: identity politics applies to and affects everyone in strange and interesting ways.

That said, there are at least two types of simplifications: those that increase our understanding of essential features by setting aside relevant but non-crucial data, and those that obscure by disregarding fundamental complexity. Klein’s book generally falls into the former camp. It’s an impressive work of scholarship by an impressively original thinker, and while its solutions may not be up to the problem, we have a better chance of grasping the problem with his work in mind.

Austin Coffey hails from Austin, Texas. He recently graduated from of the University of Oklahoma, where he studied economics and literature. As a 2020–21 Luce scholar, he will soon be moving to Sri Lanka to study and work on the institutions and culture of democracy.