Woodward, Reconstruction, and Their Legacy 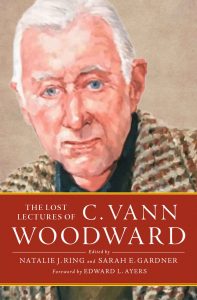 The great intractable American social problem is race. There is, undeniably, a vast difference in wealth, social status, and achievement between blacks and whites in this country; a disproportionate share of the poor and the incarcerated are blacks and other minorities. It is also undeniable that these differences can, at least in part, be traced to the legacy of racism, both explicit slavery and political action upon emancipation. There are those, understandably, who see this as a fundamental injustice—one calling for a fundamental restructuring of our economic, our constitutional, and our legal institutions.

The most noteworthy effort of this sort is the 1619 Project of the New York Times, which has apparently convinced many educational leaders and others that slavery is not only the original sin of America, but that key events in our history, including the American Revolution itself, must be attributed to slaveowners’ desire to perpetuate their peculiar and nefarious institution. That this is a retelling of American history that is, in some ways, demonstrably false, has not seemed to bother its proponents, even though some of our greatest historians have pointed out its shortcomings. This is not to say, however, that there are not great historians who have been haunted by the manner in which we have grappled with our mixed race heritage.

Perhaps the greatest of those was the late C. Vann Woodward (1908–1999), professor at Johns Hopkins, and then Yale, whose most famous work, The Strange Career of Jim Crow (1955), was acknowledged by Martin Luther King Jr. to be “the historical bible of the Civil Rights Movement.” In Strange Career, Woodward argued that segregation in the South was a post-Reconstruction phenomenon, and that it was anything but inevitable. The implication of his work, then, was that racist policies in the South wrongly resulted in subjugation of the black race, that the freedmen had escaped one form of bondage to be trapped in another, and that this glaring injustice cried out for social action to correct it. Earlier, Woodward had published The Origins of the New South 1877–1913 (1951), which offered a Beardian economic interpretation of Post-Reconstruction Southern history. Origins blasted the romantic notion of the South as the preserve of chivalrous aristocrats, and found venality and racism in abundance.

Woodward was himself a son of the South (from Arkansas), but he clearly had an ambivalent relationship to his native region. If anything emerges from this intriguing collection of some of his previously unpublished lectures and writing, it is that core ambivalence. Looming in the shadows of this collection is Reconstruction—the post-Civil War effort by the North to mandate Southern institutions to replace slavery, and to protect the freedmen, an effort which Woodward clearly condemns here as the single greatest failure in American history.

Reading this collection is a bit like assembling the pieces to an incomplete puzzle, and, as the insightful foreword by Edward L. Ayers, and the excellent introduction by the editors, suggest, this might be because some of these unpublished writings were part of an effort, never realized, to complete a contracted book on Reconstruction.

While Woodward was contemplating that book, the scholarship on Reconstruction was undergoing an important revision. It had been the view for several decades preceding the years of the Civil Rights Revolution (1957–66) that Reconstruction had failed because it was administered by Northern fanatics, miscreants, and scoundrels bent on subjugating noble Southerners to the advantage of the North, and also because the freedmen were simply not yet capable of responsible political participation.[1] Perhaps seeking inspiration for their contemporary crusade to overturn perceived Southern injustice, Reconstruction revisionists argued that the Radical Republicans of the 1860s actually had a noble purpose, and that the freedmen had, in fact, participated in politics admirably, and performed quite as adequately as at least some voters in the North.[2]

The reader of this volume suspects that Woodward would have liked fully to endorse the view of the Reconstruction revisionists, but his intellectual honesty prevented him. The former argument about Northern miscreancy may indeed have been true, but he apparently did not find enough support for the revisionists’ theory. Indeed, one is led to wonder whether Woodward never finished his Reconstruction history because he would have had to explode the revisionists’ benign view of the Radical Republicans, and so we do not have those later-career conclusions. In light of what Woodward believed to be the laudable goals of King and others like him, Woodward hesitated to produce anything that might undermine their efforts. This is, of course, pure speculation, but what is included in this collection does help one understand why Woodward had a great reputation for irony, and how his idealism was tempered by clarity of vision.

This is a bit of an eclectic collection, including several unpublished lectures (in one case, an unpublished part of a lecture), and two chapters of another book that Woodward never completed. The subject of that book, and of several of the lectures included here, was exiles from the South who left their native land in opposition to slavery. Some, like the Grimké sisters, are well known, but many treated here are not. In illuminating this group of idealists and misfits, Woodward demonstrates a splendid eye for detail and wry psychological insight. For example, of one Southern apostate who tried to spread his new gospel in the North, Woodward writes “though the anti-Slavery man was no longer cast into a dungeon as was Garrison or murdered as was Lovejoy, there was a bleak Siberia in the heart of every community to which he was sent.”

A powerful theme among these exiles was their alienation, and, whether or not Woodward intended it, the reader wonders whether Woodward was engaged in a bit of projection, or was subtly trying to tell us something about his own feelings. In his Storrs Lectures, delivered at Yale Law School in August of 1969, the first of which is published here, he recalls a question of his youth, and asks of the South, “If Marse Robert was all that noble and intrepid, if Stonewall was all that indomitable and fast on his feet, if Jeb Stuart was all that gallant and dashing, and if God was really on our side, then why the hell did we lose that war?” Woodward offers no answer here, but the implication is that the superior brute force of the North simply imposed its will on the South. Further, Northern propaganda (aided and abetted by some willing Southern exiles, as Woodward shows) sustained the North in its subjugation of the South. Northern self-interest and crass political calculations, he also shows us, led the North to abandon its ostensible crusade for the betterment of the freedmen, who then, Woodward explains, were all but re-enslaved. One can infer from this Woodward’s likely argument: God was not on the South’s side; the North won the war but then failed the freedmen for its own interests.

Woodward seems here wholeheartedly to endorse the goals of the Civil Rights movement, and its aim to better the lot of African Americans, but his treatment of the nineteenth-century Radical Republicans and their Southern allies exiled among them, makes one wonder whether he thought advocates of radical change are misguided.

In our own time, when we are lectured by self-styled “Antiracists,” such as Ibram Kendi,[3] who believes that our society is shot through with “systemic racism,” and who explains economic and other kinds of inequality as a result of that attitude—and, indeed, who appears not to be able to differentiate among what he perceives as the deleterious effects of racism, capitalism, and the patriarchy, Woodward’s cautionary note is helpful. If, as Woodward believed, Reconstruction is the one great American failure, perhaps we ought to hesitate before embarking on the kind of large-scale enterprise Kendi and his fellows favor, especially if one accepts their presumption that extreme racism remains even now in the instruments that would be used to effect that enterprise. The gradualist vision of a Martin Luther King Jr., a Shelby Steele, or a Clarence Thomas, aiming towards an eventual color-blind society, might still be the best means of seeking justice.

In these previously unpublished materials Woodward does not appear to be deploying the conservative sensibility of Edmund Burke, or of Russell Kirk, though those tools were helpfully and brilliantly employed by the once-Marxist historian, Eugene Genovese, a friend of Woodward, in describing the antebellum South.[4] Woodward began as a man of the left, but toward the end of his life did find more attractive the thought of the right. How sad, then, that he never applied his mature views extensively to the era of Reconstruction, or even to the question (one that historians used to pose some decades ago, but now is rarely asked) of whether the Civil War might have been avoided.

In any event, just as The Canterbury Tales, which is a somewhat fragmentary execution of what Chaucer actually intended, give great pleasure, and great provocation, so can these intriguing snippets of the musings of a truly great historian’s mind.

Stephen B. Presser is the Raoul Berger Professor of Legal History Emeritus at Northwestern University School of Law, was the 2018–2019 Visiting Scholar in Conservative Thought and Policy at the University of Colorado, Boulder, and is the author of Law Professors: Three Centuries of Shaping American Law (West Academic, 2017).

[4] See Eugene Genovese, Roll, Jordan Roll: The World the Slaves Made (1974) and The Southern Tradition: The Achievement and Limitations of an American Conservatism (1994).