Writing from the Edge of the Middle 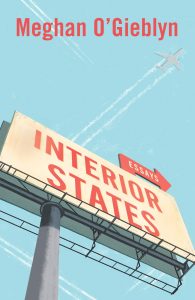 I learned to see myself as an anachronism when I was about nine, when I caught sight of my reflection overlaid on the posters of beautiful women advertising the cuts and color options in the window of the local hairdresser. My demure little self (I was raised in a Christian community that, in the Anabaptist tradition, values plainness and modesty of dress) contrasted with the bikini-clad Liverpool tans on display. That moment of double vision made it suddenly clear that I was not quite part of the world that surrounded me: in but not of, in the classic Christian formulation. As all too many parents have discovered, forbidding pop culture’s consumer-ripe fruit can produce a kind of mindless desire. But it can also instill a more critical stance. Maybe it’s just sour grapes, but sometimes outsiders do have a sharper vision.

I was reminded of this incident recently while listening to a podcast interview with Meghan O’Gieblyn, essayist and author of a new collection, Interior States. She’s talking about growing up as a fundamentalist evangelical in the Midwest: “I was taught a lot of critical thinking skills, as a Christian,” she tells her interlocutor, “because we were constantly critiquing the culture.… Pastors and my parents used to refer to ‘the world,’ and this was basically anything that was the secular world, anything that wasn’t Christianity … in advertising, television, popular culture—we were constantly doing this type of deconstruction.” This might seem counterintuitive at first. Anti-intellectualism is all but a synonym for fundamentalism, but O’Gieblyn is careful to point out the intellectual attention her childhood tradition demanded. And deconstruction wasn’t the only end of this patient attention. She writes in the essay “On Subtlety”: “As children, we were taught to remain alert at all times. God could speak to you though a fortune cookie, a highway billboard, the lyrics of pop songs.” Depth perception, after all, is the synthesis of two slightly different views of a single object. These two ways of seeing, suspicion and love, are what give O’Gieblyn’s essays such wonderful perspective.

To be in but not fully of—to be simultaneously at the middle and at the edge of things—isn’t that also the irony of the American Midwest? It’s as if the United States of America is a great inverted page—dark with cultural and technological innovations along its east and west edges—Washington and Wall Street, Hollywood and Silicon Valley. A wide blank margin runs down its center: the Midwest, as unnoticed to the nation as the white space on a page, and yet as essential: the backdrop of plain Americanness over and against which the eccentricities of coastal cosmopolitanism are inscribed. This is wittily summarized in one of the book’s epigraphs: “All Americans come from Ohio originally, if only briefly.”

“It’s difficult to live here without developing an existential dizziness, a sense that the rest of the world is moving while you remain still,” O’Gieblyn writes. But here again, stillness is a kind of perspective. The stoicism she encounters in elderly Midwesterners and, increasingly, in herself, is the grounds for a wry sort of wisdom: “To live here is to develop a form of a wariness of … unqualified optimism; it is to know that progress comes in fits and starts; that whatever promise the future holds, its fruits may very well pass by, on their way to somewhere else.” It’s more that down-home common sense: it’s the lived experience of being left behind, of finding yourself the collateral damage of great tried and failed social and economic experiments.

The back cover of Interior States has a question for potential readers: “What does it mean to be a believing Christian and Midwesterner in an increasingly secular America where the cultural capital is retreating to both coasts?” What does it mean, in other words, to live in “Trump country”? The events of 2016 turned the conversation back around, inward, focusing coastal America’s attention on the Midwest as the Midwest with a sort of befuddled curiosity, toward America’s interior states that had been so easy to ignore for such a long time. (Of course, it’s worth noting that some of the defining national crises of the last decade can be evoked by the names of Midwestern cities: Detroit, Ferguson, Flint.) But if Interior States is being billed as a Hillbilly Elegy–esque explainer, it far exceeds that reputation, and asks far more interesting questions.

O’Gieblyn’s descriptions of the region are strikingly beautiful, lingering on particulars where a visiting writer might paint in sweeping strokes or stock images. Her description of downtown Madison, Wisconsin: “There were gleaming aluminum silos and emissionless brick chimneys. In the prairie stockyards near my apartment, blue railroad cars were lined up like children’s toys. Beyond the fences, giant coils of yellow industrial hose glimmered in the morning light, as beautiful as Monet’s haystacks.” But O’Gieblyn’s writerly love for the region refuses to be nostalgic, to let a Kinkaid-ish haze saturate and blur her vision of home. After all, as she notes in “Dispatches from Flyover Country,” the haze over Lake Michigan is actually smoke from California wildfires. And this might serve as an extended metaphor for several of the fogs of contemporary life—American niceness, the Pure Michigan campaign, contemporary Christian music, all seemingly pleasant things that turn out, under O’Gieblyn’s exploration, to have doubtful, if not dangerous, origins.

Take contemporary Christian music (CCM), the birth and rise of which O’Gieblyn chronicles in “Sniffing Glue.” The essay reads like memoir—O’Gieblyn writes that her adolescent musical tastes “ran the gamut from Christian rap to Christian pop to Christian rock.” She recounts how the Christian music industry consciously trailed MTV trends as the church sought to appeal to unchurched youth and to keep its own young in the pews (or at least in the basement on Wednesday night). It’s also an unfinished story, as acts like Hillsong retain staggering popularity. But it’s a project that, O’Gieblyn argues, had an expiration date built into it from the beginning:

Staying relevant in late consumer capitalism requires highly sophisticated resources and the willingness to tailor your values to whatever your audience wants. In trying to compete in this market, the church has forfeited the one advantage it had in the game to attract disillusioned youth: authenticity. When it comes to intransigent values, the profit-driven world has zilch to offer. If Christian leaders weren’t so ashamed of those unvarnished values, they might have something more attractive than anything on today’s bleak moral market. In the meantime, they’ve lost one more kid to the competition.

I don’t know how many pastors and worship leaders read Guernica, where the essay originally appeared, but this paragraph feels like a free gift to them (if one that feels more like a thorn than a blessing), and to anyone concerning themselves with witness and evangelization. There also seems to be a quiet “what if” under the justified bitterness of the words, an unasked question that demands, never the less, to be answered. Unlike O’Gieblyn, I’ve kept the faith in which I was raised, but these lines have stayed in the back of my mind, almost constantly, since I first read them.

I’ve read plenty of “de-conversion” narratives, and O’Gieblyn’s account of losing her faith is refreshingly free of the self-righteousness and certainty that clogs the worst of the genre. It’s also painful to read. In “Ghost in the Cloud,” an exploration of the origins and appeal of transhumanism, O’Gieblyn recalls the months after losing her faith and leaving Moody Bible College where she had been studying: “what I recall most viscerally is an unnameable sense of dread—an anxiety that would appear without warning on the landscape of my body.… My body had become strange to me, insubstantial.… One morning, on the train home from work, I became convinced that my flesh was melting into the seat.” It was from this desperate sense of loss that O’Gieblyn reached for transhumanism, with its apocalyptic promise of the dead being raised and the earth being upgraded. “I had initially been drawn to transhumanism because it was grounded in science. In the end, I became consumed with the kind of referential mania and blind longing that animates all religious belief.”

You may disagree with O’Gieblyn’s description of religious belief, but that hardly negates the depth of her loss. These twinned themes of loss and the shape of story accompany O’Gieblyn’s explorations of topics as varied as Alcoholics Anonymous, the Creation Museum, John Updike, apocalypticism and the environment, Mike Pence, Michigan’s water, the legacy of Henry Ford. “[E]ven when a person outwardly denounces a long-standing belief, the architecture of the idea persists and can come to be inhabited by other things. This is as true of cultures as it is of individuals.”

This thesis, if a collection of essays can be said to have a thesis, gets at the role of the personal essay. There’s a question that goes helplessly round and round in literary circles: Is the personal essay too personal, too confessional to be of any sort of public relevance? Without trying to cap this debate O’Gieblyn pushes it in a new direction, drawing on her evangelical upbringing: “We did not confess; we professed, and we did so publicly. The narrative ritual taken up by our congregation was performed in front of the entire body of fellow believers, a convention called ‘giving testimony.’” Confession aims toward an “experience of private catharsis,” whereas “the testimony had a decidedly communal purpose.” She takes testimony as her model for the essay. Each Christian’s story, or testimony, is evidence in the great case for the goodness of God and the truth of the faith. But it’s not only that each Christian’s story might stand in proxy for another’s story. It’s that each story, with its arc from original innocence to fallenness to redemption, is a microcosm of the great story itself.

And, by chronicling her own loss of narrative and purpose—of telos—O’Gieblyn gestures toward the larger loss felt by the whole nation. When you look around, it’s not hard to see many of America’s great stories—that we are a Christian nation (whatever that means), that free markets result in free and happy people, that this country is a benign and humanizing force in the world, that hard work results in prosperity—unraveling under the forces of a reality that starkly contradicts them.

The credibility of Christian witness has been compromised by its willingness to align the great story with these secular stories, and to honestly face how these narratives have underserved people and failed to conserve what really matters. How have Christians sacrificed integrity and “unvarnished values” on the altar of cultural relevance and political clout? How, in other words, have we lost our perspective? “Awareness is not the same as perspective; sometimes the former is an obstacle to the latter,” O’Gieblyn writes. It’s an insight so obvious that you don’t see it until someone points it out to you. And once they do, you can’t stop seeing it everywhere.

Veery Huleatt is a member of the Bruderhof, and an editor at Plough Quarterly.