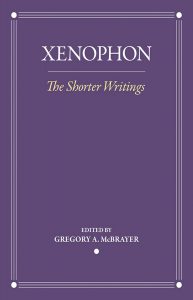 The fires of the Social War that brought the imperial power of Athens to its knees had not yet been slaked when Xenophon wrote what would be his final treatise, Ways and Means, or On Revenues. The dislocation of exile did not sever Xenophon’s interest in the destiny of Athens; he reacted with sympathy when misfortune set its hand against his homeland. On the surface, the Ways and Means is an attempt by a native son of Athens to restore the laurel to that great city through economic reforms. On a deeper level, it is the recognition of national existence as a strenuous act of renewal; and, more importantly, the affirmation and exposition of a certain kind of knowledge, or “science,” of political economy.

Xenophon liked to open his political discourses by wondering about knowledge. Hiero begins with a question for its namesake tyrant: “Would you be willing, Hiero, to tell me about something it is likely you know better than I?” The Regime of the Lacedaemonians opens with Xenophon wondering at how rustic little Sparta became the premier land power of Greece. On further reflection of the laws set down by Lycurgus, and Spartan obedience to them, however, he declares: “I wondered no longer.” Xenophon remarks at the outset of The Education of Cyrus that man is by nature the most difficult of all animals to rule. And yet Cyrus shows us, Xenophon admits, that “ruling human beings does not belong among those tasks that are impossible, or even among those that are difficult, if one does it with knowledge,” or epistēmē—approximately, a “science” of rule. Xenophon’s Socratic dialogue on “household management”—that is, economics—follows this pattern. “Tell me, Critoboulus,” Socrates asks in the Oeconomicus, “is management of the household the name of a certain kind of knowledge, as medicine, smithing, and carpentry are?”

If the Education affirms a science of rule, and the Oeconomicus adumbrates a science of economics, then the Ways and Means is that science applied to a political regime; that is, a program of political economy. In this view, the economy is an instrument of the rulers; therefore it is intimately connected with, but subordinate to, the science of rule. Adam Smith limns this view for us with a little more clarity, outlining political economy as a “branch of the science of a statesman or legislator.” Though each of the proposals in the Ways and Means certainly merits evaluation, the focus here will be narrowed to a few key items, made all the more accessible in a new collection of Xenophon’s works, The Shorter Writings. As in medicine, the complete person—in this case, the complete regime—is considered, physically and psychologically, in the treatment of disease, or prescription of policy. Economics is ultimately subject to political realities, just as medical treatment must consider both the sickness and health of a patient—or else the prescription be ineffective, or, worse, kill the patient.

The Ways and Means, then, is unique not only because Xenophon crafts a program of political economy, but because it departs in ways, often radical, from Plato and Aristotle. It is also something of a dialectic: Xenophon reckons with political, economic, and social conundrums; when there is no way back or around, he leads us forward. Athens remains attached to its identity as an empire, despite a disastrous military defeat. With that framework in mind, Xenophon proposes a plan that will orient Athens toward commercial, rather than military, imperialism, by redirecting Athenian ambition for honor in conquest, to honor in commercial affairs. Xenophon’s political and economic emendations must conserve what made that city great to begin with, while advancing an innovative phalanx of solutions to make Athens great again.

The bulk of Ways and Means concerns itself with silver. Breaking with Plato, who, as Murray Rothbard noted, “called for a government fiat currency,” because “gold and silver constitute a potential threat to economic and moral regulation of the polis by the rulers,” Xenophon hailed the satiny metal as a boon. Silver currency eliminates the problem of “coincidence of wants,” where, without a monetary medium, each party must desire the other party’s goods for an exchange to take place. Merchants, writes Xenophon, “can carry out fine merchandise by carrying out silver,” rather than goods. But Xenophon goes beyond basic economics.

In the same space where he notes the effects of inflation on the value of gold, Xenophon not only claims that “silver will never lose its value,” but that “it will never run out.” Athens’ “divine fate,” it seems, is the blessing of an endless supply of inflation-proof silver. What, then, is the meaning of this? The meaning is primarily political, rather than economic. Xenophon endeavors to make his own myth of metal, so that the Athenians may be “confident in leading as many people as possible to the silver mines”—that is, confident in the basis of Athens as a commercial, rather than military power. This is an attempt to effect a fundamental change in the Athenian psyche, and Xenophon understands that such an undertaking requires the formulation of a social myth; “to persuade, in the best case, even the rulers, but if not them the rest of the city,” as Socrates said of his own “noble lie.” Economic fact, then, is subordinated to myth born of political necessity.

Just as he broke with Plato, Xenophon stood at odds with Aristotle, who famously warned that a city near the sea risks an influx of both foreigners and commerce; things that, in his view, are fundamentally harmful to the fabric of the city. Xenophon, in contrast, has only praise for the harbor of Athens, precisely because it makes the city “pleasant and profitable for commerce as well.”

Athens had become dependent on the taxes and functions of resident aliens, though they occupied a second-class status. Xenophon, in response, called for better treatment of foreigners, proposing the creation of a resident alien “rights” bureau and construction projects to house them and even attract more. Xenophon went further still: Athenians ought to pull foreigners out of the hoplite fighting lines and allow them to take part in the cavalry, a position reserved for the aristocracy—the latter being an radical proposition, and having nothing at all to do with the economy of Athens.

Xenophon makes an astute observation at the outset of Ways and Means in so few words that it’s easy to miss as one begins to amble through the tract. “I, for my part,” he writes, “hold this belief: whatever sort the leaders may be, such also the regimes become.” He then acknowledges a split in the Athenian ruling class, between those satisfied with the “unjust” status quo and those in favor of reform, to whom Xenophon is primarily speaking. In this light, injecting new blood into the aristocracy through the cavalry can be seen as an attempt to alter the composition of the ruling class of Athens in such a way that would align its political conditions with Xenophon’s economic proposals. An ossified ruling class is liable to become self-serving and “unjust”; new elements, therefore, ought to be introduced which are diverse in origin and interests—and what better pool to draw from than the resident aliens of Athens? “From the point of view of the theory of the ruling class,” wrote James Burnham, “a society is the society of its ruling class. A nation’s strength or weakness, its culture, its power of endurance, its prosperity, its decadence, depend in the first instance upon the nature of its ruling class.” On some level, Xenophon understood that economics is downstream of politics, and, indeed, culture—a change in the former requires a change in the latter.

There is, of course, the glaring issue of slavery in the Ways and Means. Silver is central to Xenophon’s political economy. Mining it requires slave labor—a lot of it. Xenophon goes so far as to propose that Athens should “acquire public slaves” and create infrastructure for leasing them out. This is a concession to the harsh reality of slavery in Athens and an attempt to make the best of it. It cannot be overlooked, however, that slavery is in tension with the basis of Xenophon’s undertaking: To create “the most just way” for the Athenians “to be able to feed themselves from their own [land].”

Perhaps a more fundamental question than the theory and praxis of political economy, one that Xenophon seems to have reckoned with, is if and to what degree that science can address moral and ethical problems. But that answer may have been given at the start: “whatever sort the leaders may be, such also the regimes become.” The nature of a regime, whether it is or to what degree it can be just, is determined by the character of the rulers and the people of which they are a reflection.