Yes It’s Poetry, But Is It Good? 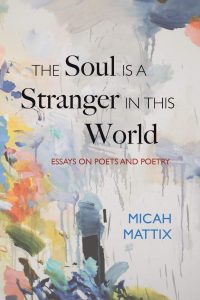 Lovers of poetry will find much to enjoy in this volume, which collects short essays written by the literary editor of The American Conservative. As a professor of English who has taught at Yale and UNC Chapel Hill, and who chairs the department at Regent University, Micah Mattix is familiar with the fact that the majority of modern poetry is essentially polemical, and he therefore begins his collection with a meditation on “The Poet and Society,” in which he focuses on the history of poetry as a medium of comfort, as a narrative and musical art form in which the poet seeks both to console and to call to remembrance. This role of the poet is, of course, directly contrary to what a majority of poetry “professionals” now espouse—that the poet is a rebel, who is to confront, deconstruct, to act as something like a Delphic oracle who “speaks truth.” This contemporary self-appointment of poets as prophets is consonant with the reality that artists in all media have “evolved” very much to the point where much of their art is more about the artist than the work itself, a reality analyzed by Mattix when he describes Allen Ginsberg as more popular for his persona than for his poems (which are, if nothing else, repetitive).

There are many who think of poets as “mouthpieces railing against injustice,” but the question that Mattix poses about any poet is not whether he or she is railing against anything, but does the poet write good poetry? The criteria he uses can be technical, relating to meter and footing, but in general he invites the reader to examine not just what the poet has to say—both in words and in the symbols depicted by these words—but how the poet says it. This is not to say that the author is uninterested in what a poet may have to say about politics, just that when the poet does so he does not thereby qualify for any special indulgence from what it means to be narrative, to be musical, in ways that communicate the virtue upon which the poet focuses. For example, in his essay “Paul Lake and the Politics of Language,” Mattix examines closely both the language of Lake’s poetry, and the poet’s rejection of critical theory and relativism, two thought movements which present themselves as champions of difference but which in fact undermine community and tolerance. One cannot reject meaning without appropriating the power to define meaning, a point explored by Lake in his collection The Republic of Virtue, in which Robespierre renames vice as virtue.

The author is most concerned with what the poets say, but this is not to the exclusion of any interest in how they say it. Thus, in two essays, “A Short History of Form” and “Is Free Verse Immoral?,” he explores how all poetry is constrained in one way or another, and how these constraints, far from preventing innovation, can foster it. That said, in “Flarf and Form,” Mattix makes clear that that theories of poetic form in general give rise to boring poems. He is far more interested in that which is alive, and his ear is attuned to what sings rather than merely recites. If anything, the author is allergic to the use of theory to stake out “positions.” His engagement of poets and poetry speaks to tastes that are both broad and generous, coupled with a keen attention to the interaction between the poem and the reader. The collection is worth exploring both for what Mattix has to say about poetry and for how he introduces the non-specialist to poets not at all well known—but who should be—such as Reginald Shepherd and Dana Gioia.

Explore with Mattix. You will not be disappointed.

The Rev. Dr. Karl C. Schaffenburg is a retired Episcopal priest serving in Mississippi, having previously worked in the pharmaceutical industry in the United States and Europe.