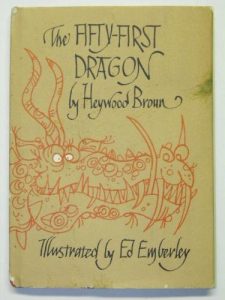 Heywood Broun’s very short story, The Fifty-First Dragon, was published in 1921 by Harcourt Brace. It concerns a medieval school for the formation of knights. Matriculating in this school is an apparently inept candidate by the ironic name of Gawaine le Cœur-Hardy. Gawaine seems to have been physically fit enough for the noble school, but he lacked “spirit.” He did not take to jousting, even the watered-down variety with ponies and padded lances. Most of the school’s faculty, except for the Headmaster who seems to have had some faith in him, wanted to expel Gawaine as unfit.

The Headmaster, surprisingly, put Gawaine in the specialized program that trains knights to slay dragons. In fact, in the woods and hills surrounding the school, dragons were in plentiful supply. They were big beasts, six or seven hundred feet long, and busy devouring local peasants for lunch. Something had to be done. If he could overcome his lethargy and hesitation, Gawaine seemed to be the man for the job.

The Headmaster subjected Gawaine to the study of the history and habits of dragons. Gawaine seemed to relish the training. For a weapon, he carried a heavy battle-ax, no mean weapon. After detailed preparations, the Headmaster figured that he could send Gawaine after the marauding dragons if he could first instill confidence into the lad. The young man, recalling Plato, wanted a cap that made him invisible, but when Gawaine found out that there was no such thing, he was frightened at the prospect of his chances among the six-hundred-feet-long dragons.

The Headmaster, however, told him of a secret word that, so he said, would protect Gawaine at all times—if recited correctly. The word was “Rumplesnitz.” It took a lot of practice for Gawaine to pronounce and remember this word, particularly when he needed it at the approach of a dragon. The Headmaster made it clear that all Gawaine had to do to be safe was pronounce the word, “Rumplesnitz.”

So the die was cast. Gawaine believed the Headmaster. Next step was to make his first foray into dragon-land. Thus far, it was only a matter of faith. About a mile from the school a big dragon spotted Gawaine and charged him. The knight yelled “Rumplesnitz” while swinging his battle-ax. Zip, no more head on the dragon. Gawaine collected the ears and a piece of dragon tail and took them back to the school as proof of his feat. As the days passed, Gawaine killed more and more dragons with the aid of the magic word. His fame spread. Fellow students studied his technique.

Gawaine began to go out dragon hunting on his own. The day came when he was to kill his fiftieth dragon. He had begun to wear all his medals while dragon hunting. But the fiftieth dragon was a special case. He was an old dragon and apparently had heard that Gawaine had some magic about him. So he did not charge the knight but waited for the knight to come to him. But as he tried to kill the old dragon, Gawaine forgot his magic word.

Gawaine became frightened. Despite thinking it unfair that the knight had magic assisting him, the dragon himself tried to help Gawaine to remember. He knew it began with an “r,” but it was not “Republican.” Seeing the knight’s perplexity, the dragon naturally asked him if he surrendered. If so, the dragon would eat him. Indeed, it would eat him if he did not surrender—and if Gawaine did not surrender, the dragon thought, he would taste better. Gawaine became more and more frightened; his old timorous self was returning. The dragon was in the act of devouring the knight when Gawaine swung his battle-ax and cut off the dragon’s head. Suddenly, Gawaine remembered the magic word, but only after he had killed the dragon. This puzzled the knight very much. Something was wrong.

Gawaine carried his concern to the Headmaster, who was delighted to hear these developments. The Headmaster explained that the word “Rumplesnitz” really did not mean anything. Gawaine had killed the dragon by virtue of his own power and skill. Logically, then, credit for killing these fifty dragons went to his skill, not to any magic word. The knight was now as free of faith and superstition as was the Headmaster. Gawaine was his own man, with his own power. He was no longer dependent on anything beyond himself.

Gawaine realized that the Headmaster considered all along that the dragon killings had nothing to do with magic, only with the skill instilled by the school’s training. The Headmaster had, in fact, lied to him to overcome his fears. The battle-ax, not the word, was at the center of the action. All of this confusing information bothered Gawaine very much. He returned to his old ways. He did not get up in the morning. He realized that if he had not struck the dragons when he did, any one of them would have eaten him alive. He was just lucky.

The next day found Gawaine cowering in bed. He had no real confidence in his own battle-ax without the protection of the magic word. While the school officials were worried about what was bothering him, they dressed him up anyway and shoved Gawaine out for his fifty-first dragon. It was spotted not far from the school—a smallish, older beast. But Gawaine never came back. After a couple of days, they found tatters of his uniform and medals scattered around one of the outlying fields.

The Headmaster and his assistants had the problem of explaining what had happened to Gawaine. His disappearance was noted. They shrewdly decided, however, that, for the sake of school spirit, the never-to-be-equaled record of fifty killed dragons would be memorialized. No mention of the fifty-first dragon would be forthcoming. The ears and tails of the dragons that Gawaine killed would be prominently displayed in the school’s main hall. But silence was kept on how Gawaine died.

When we reach the end of this tale we are left to ourselves to speculate about the manner and point of Gawaine le Cœur-Hardy’s life and death. The knight who had killed fifty huge dragons was killed by a small and unimpressive one.

Did Gawaine forget the magic word again? Probably not. Even if he remembered it, he was told by the Headmaster, who had deliberately lied to him, that it was not magic.

Or was Gawaine so disillusioned by this deception that he did not even try to save himself?

Or was it necessary to believe in the word in order to succeed in killing the dragons? His own strength and battle-ax were not really enough. The fiftieth dragon was killed before the word that was supposed to save him could be uttered. From this account, the Headmaster concluded that all the previous dragons were also killed by the skills acquired at the knights’ school.

Gawaine le Cœur-Hardly himself concluded that, if his faith was a lie, he had no way to defend himself. His strength did not depend wholly on himself. The bond that holds things together was broken. Meanwhile, back at the knights’ school, the young men are taught that all depends on their own strength, which is developed in their training. No one who attended the school ever heard of the fifty-first dragon. Their education was complete without the word.