A Cautionary Tale for Our Loveless World 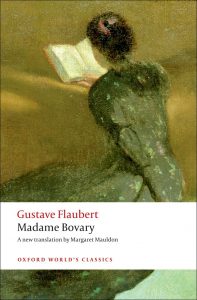 Madame Bovary by Gustave Flaubert scandalized audiences by glamorizing adultery and ridiculing marriage and religion. The novel’s story is about Emma Roualt, the wife of a dimwitted country doctor, Charles Bovary, who seeks respite from her boring lifestyle by committing adultery, first with a caddish aristocrat and then a foppish young clerk. Although Emma ends up feeling more pain than pleasure from these extramarital affairs and eventually commits suicide, the novel never makes a straightforward condemnation of adultery. Instead, Flaubert expresses in the novel more a fatalistic judgment on a woman who was doomed to suffer whatever choices she made.

The French Imperial government took issue with the novel and charged Flaubert with promoting immorality by threatening the sanctity of the family and the teachings of the Church. Imperial Attorney Ernest Pinard gave a summary of the book that sets up the context for passages that extol adultery: “What the author [Flaubert] is showing you is the poetry of adultery, and once more I ask you if these lascivious pages are profoundly immoral!” In response, Flaubert’s attorney pointed to the same passages and insisted that the case was the opposite: “As for its moral intention, it is so evident—it is written in lines so far from ambiguous—that there was no need to question it.”

In the end, Flaubert’s side won the argument, claiming that the book follows the realist tradition, casting an honest light on its less-than-noble subjects. Moreover, his aim was never to glorify adultery but to consider the influences that would drive a woman to do this. Again, in the realist fashion, he criticizes the preceding Romantic movement for its preoccupation with passion and its consequent corruption of unsuspecting readers like Emma Bovary.

Although it might feel somewhat quaint that a book fall under such scrutiny, there is something admirable in the weight and seriousness that a government took with its art. Society in the nineteenth century understood the power of words and narrative. It was never the polemics of Voltaire and Diderot that would bring down Christian culture, but the operas and novels that inflamed readers’ imaginations. And, to Flaubert’s point, the lack of reality in these fanciful depictions, however ostensibly instructive, are really what drew an individual away from moral living.

Unfortunately, this lesson of Madame Bovary and its consequent trial has been lost as the book has increasingly become the subject of feminist criticism. On one hand, for the time, Flaubert gives a fairly complex portrait of a woman who breaks with conventional mores and pushes the boundaries of her station. On the other hand, she is mostly a terrible person with few redeemable qualities. As feminist scholar Robin Morgan puts it, Emma “is a one-dimensional cartoon, all that a class- and gender-limited imagination could manage to draw; she’s the blank screen for a privileged man’s projections of his own superficiality, lust, and ennui (in this sense Flaubert was Madame Bovary).”

While not exactly wrong, this judgment misses the significance of the book. Flaubert’s novel is not about the women of his time, but about the world that informs their behavior and actions. As Flaubert’s lawyer argues, Madame Bovary “is a story of an education, the story of a deplorable life to which this sort of education is too often the preface.” From the time she attends school, Emma is inundated with the stories about “love, lovers, mistresses, persecuted women fainting in solitary little houses, postilion expiring at every relay, horses killed on every page, gloomy forests, romantic woes, oaths, sobs, tears and kisses, small boats in the moonlight, nightingales in the groves, gentlemen brave as lions, gentle as lambs, impossibly virtuous, always well dressed, who wept copiously.”

At the same time, Emma loses her mother in adolescence, leaving her with little guidance on married life and adulthood. Consequently, she is set up for disappointment as soon as her father pairs her off with the nice-enough blockhead Charles Bovary. From the very beginning, she desires poetry, passion, and glamour, only to be foiled by her quotidian, mild-mannered husband who makes a modest living in a small ugly village in Normandy. As this reality sets in, Emma continues to consume her escapist fictions and dream of having an extramarital affair that can compensate for her lack of excitement.

It is this dilemma of distinguishing between the idea versus the reality of love that has much relevance for readers today—far more than Emma’s status as a woman. Her situation mirrors the situation of many women (and men) today, who struggle with understanding and thus appreciating conjugal love. Although not “paired off” any more as in the patriarchal world that becomes the constricting focus of feminist criticism of the novel, the gap between real and superficial love remains. As it was in Emma’s world, popular media continues to project romanticized visions of couples who experience the full spectrum of ecstasy and excitement of courtship and monogamy, while little attention is given to accompanying pleasures of family, stability, and maturity. And, as it was with Emma, family breakdown has left countless individuals without any real models for long-lasting relationships, leaving them to seek guidance in fictional narratives.

Raised on so many decades of sitcoms featuring attractive single people coupling with different partners periodically and never marrying, young adults today have not learned to define conjugal as such. While perhaps not as dramatic and bold as Emma Bovary, so many otherwise rational college-educated adults yearn for relationships replete with “tingles,” “chemistry,” and “vibes”—in other words, they will let their hormones and emotions tell them if the possibility of love exists or not. Naturally, this results in so much heartbreak and stunted maturity. An epidemic of loneliness has now swept over the developed world, as men and women marry less often and never have children. The dissolution of the family has in turn brought about a dissolution of community and now threatens a demographic winter in the coming decades as birthrates fall below replacement levels.

After a while, alienated adults reach a point where they are simply stuck with themselves. For her part, Emma always returns back to herself after her affairs, having ditched the permanent companionship of her husband and daughter for the ephemeral relationships of her lovers. As such, she becomes selfish, reckless, and incapable of any kind of connection—and this was without a false social life of social media. None of it has to do with her status as a woman, as feminist critics might suggest, but with her refusal to let go of the narratives that have misled her for so long.

Although Flaubert ends his tale with an unhappy ending, he does offer some possible remedies to Emma’s loneliness and despair. Society as a whole, but especially those charged with caring for the young, must take care to present realistic models of marital fulfillment. However, this must be done without simply trying censorship and banning problematic works—as the French government ironically attempted with Flaubert’s novel—but by countering such works with more realistic yet compelling narratives. This does not necessarily mean telling sad stories of bored housewives to counteract happy stories of passionate love affairs, but by telling complex stories that consider the tensions between feelings and reason, expectations and reality, and pleasure and happiness. Appropriately, a novel that does this much better than Madame Bovary was written by a woman almost ten years earlier: Jane Eyre by Charlotte Bronte.

Whereas Madame Bovary reveals the relational problem afflicting modern generations, Jane Eyre offers a solution. While Emma’s upbringing fosters superficiality and immaturity, Jane’s education fosters empathy and humility. While Emma finds herself caught in a vicious cycle of lust and deception, Jane gradually ascends a clear path to maturity and wisdom. While Emma becomes a slave to her passions and the exploited dupe of irresponsible men, Jane becomes an empowered woman on whom others come to depend.

Over 150 years later, Madame Bovary proves its timelessness in the lessons it teaches and in the story it tells. It is true to life, sometimes uncomfortably so, but this truth transcends its setting. The tragedy of Emma Bovary is the tragedy of today’s men and women who have traded away real love and real marriage for passing fancies and uneasy cohabitation. Considering this is the result of a poor education, particularly in regards to relationships, it is thus time to take such education seriously and consider the effects of a media and academy that denigrates conjugal love and family life. In other words, we should work to replace today’s Emma Bovary with an updated Jane Eyre and so empower women—and society as a whole.