Balzac: The Man for My Thirties?

I  have come to realize that a writer has indelibly marked each decade of my life. In my first decade of life, that author was Franklin Dixon. All right, I understand that “Franklin W. Dixon,” the author of Hardy Boys, was a pen name used by multiple people who wrote the series. But those books, specifically the original hardcover series, was my first introduction into chapter books. And the series ably met the demands of my youthful imagination: adventure, heroism, independence, danger, good conquering evil, that sort of thing.

During the next ten years, John Steinbeck reigned supreme. I have my older brother to thank for that. I was in my early teens. I remember sitting on our stained floral print couch in the living room under the red geraniums that sat in the bay window my grandfather had made. My older brother had left a copy of Steinbeck’s Of Mice and Men on the sofa. I picked up the book and began reading. Something new grabbed me. I read and I read and I read. And I did not put it down until I had finished it. Of Mice and Men not only launched me into Steinbeck’s fiction, which I furiously read over the next several years, but into a lifelong love of literature. We did not have internet yet at our home, but we had a set of encyclopedias. I read and re-read the literature entries and began buying fiction “lots” on eBay: Sinclair Lewis, Ernest Hemingway, William Faulkner, F. Scott Fitzgerald, J. D. Salinger, Joseph Heller, and others became my friends. But for whatever reason, none could surpass Steinbeck in my imagination.

The man for my twenties was without question Fyodor Dostoevsky. Again, I have my oldest brother to thank. He bought me Crime and Punishment for my twentieth birthday, but I didn’t read it until I was twenty-one and back home having taken a semester off college. I suddenly had enormous amounts of free time on my hands, so a 600-page Russian novel seemed like just the thing to pass the time. I remember lying on the cracked and crusty loveseat under the loft in my bedroom (being the second youngest in my family of nine, when I went off to college no younger sibling confiscated my bedroom) and was immediately gripped by the story. The intensity, the psychological realism, and the philosophy totally dragged me in. I was hooked. When I went back to college a semester later, I thought it a good time to read Brothers Karamazov. Several years later my wife and I would name our eldest child Alyosha. In law school and still in my twenties, we spent a week in Florence. Going to Europe, I knew I needed to bring a “great” book with me. The obvious choice was a Dostoevsky novel. I brought The Idiot. I was thrilled while riding the train from Florence to Assisi to read in the Foreword that Dostoevsky had written the novel in Firenze. And that you could walk to the apartment building where he lived near the Ponte Vecchio and see a commemorative plaque that says, “Here Dostoevsky completed his novel The Idiot.” Of course, when I got back to Florence, we walked to the apartment and I took a picture in front of that plaque. Suffice it to say Dostoevsky ruled my twenties.

I am thirty-five now and still an avid reader. I have been carried away by many great writers these past five years, including Herman Melville, Willa Cather, Gustave Flaubert, William Shakespeare, Hermann Broch, and Dante. But none of them came to signify the decade quite like Dixon, Steinbeck, and Dostoevsky previously did. But then this past year, I read Honoré de Balzac for the first time. I may have found the man for my thirties.

I remember when I was in my early twenties and reading 1984. My older brother told me perhaps I should wait until my thirties. That Orwell might mean more to me then, with a little more life experience. Being an arrogant twenty-something, I did not know what he meant. But now I do. Because how literature impacts you will change depending on your own life circumstances and experiences. And I am glad I came to Balzac when I did, because he speaks to me right where I am. It is also a good time to come to Balzac, because the University of Minnesota Press recently released new translations of arguably Balzac’s two most important works, Lost Illusions and Lost Souls, by Raymond MacKenzie, both of which are essential to Balzac’s massive Comédie Humaine, his interconnected portrait of French society in the 1820s and 1830s that comprises nearly one hundred novels and short stories. 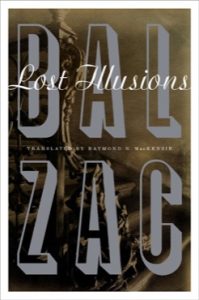 Lost Illusions is about, surprise surprise, lost illusions. Specifically, it is about the rise and fall (especially the rise and fall of the illusions) of one Lucien de Rubempré. Young, handsome, and literate, the world ought to be his oyster, right? But alas, he is also poor and from the provinces, so perhaps sardines are all he can hope for.

Throughout the course of the novel, there are many illusions that Lucien acquires, and then loses. I suspect many of us can relate to them these past few years. The lost illusions of politics. Of journalistic integrity. Of power. Pleasure. Even of art, of its supposed purity. In many ways, Balzac’s work reminds us that Solomon was indisputably right when he said there is nothing new under the sun. That the upheavals in our time, of the questioning of what is real, what is true, what even is factual, is not particularly new.

But for me, the impact of Balzac’s work was even more significant in two other areas of my life: my faith and my family. Heading into marriage and fatherhood, I generally assumed that parenting would be easy, that fatherhood would be an unmitigated joy and blessing. Also, that I would experience my Catholic faith steadily growing stronger, easier, and more filled with consolation. That I would experience more peace and joy. Even that I would be saintlier.

But let me tell you, now five kids in, including three biological and two adopted, I can easily say fatherhood is the most challenging experience of my daily life. And that, while I am deeply committed to my faith, no one would mistake me for Mother Teresa or Saint Francis. I experience viscerally the daily battle between who I am and who I want to be. Far from my experience of daily life, including family life and faith life, becoming easier, calmer, and more peaceful, I often experience life as tempestuous. And the illusions of my own holiness? Gone. More wretch than saint am I.

Admittedly, experiencing the challenges of personal and family life as challenging can spark a midlife crisis. I am thirty-five after all. And it can be easy to think, surely, I am doing something wrong. Or perhaps I am the recipient of some cruelty from the gods.

And yet, I am coming to see—through Balzac—that perhaps my current vision and experience is not wrong. Instead, what was wrong was my former viewpoint. My illusions of what sort of person I was. What sort of family I would have. What my experience of life would be.

To illustrate, I would like to share with you a journal entry I made soon after finishing Lost Illusions. I was sitting in a cabin early in the morning before my boys woke up, praying. I was struggling. The boys were constantly at each other’s throats. I was constantly at their throats. Here we were in a lovely cabin on a beautiful lake in Wisconsin, an Edenic peace over the place, and yet we seemed cast far east of Eden (Steinbeck again). And this insight came to me, which I wrote down:

I feel like I have forfeited so much: peace, calm, joy, happiness, even my supposed own sanctity. But what of that was an illusion? Perhaps I have only sacrificed my illusions. Maybe those are the hardest things to sacrifice, the biggest offering.

What is another word for an illusion? A false god. It is easy to create false gods. Of politics. Of art. Of pleasure. Good things also can become idols themselves, or sometimes distorted idols as when we recognize the good things in our lives, but they do not seem good enough, they do not seem to measure up. Like family life. My relationships. My work. The experience of my faith life. And when our lives do not live up to those illusions, then what? When our illusions (our false gods) are distorted or smashed, what then?

Through Lucien, Balzac reveals the three main paths one may take after the illusions of one’s life have lifted like so much smoke from a fire. First, the lost illusions can operate as grace, turning us from our false gods toward the light. Lucien appears to make this turn, albeit briefly, seeing his self-deception and vowing to help his sister and brother-in-law. But his turn toward the good is fleeting. Second, the lost illusions can lead us to despair, even to the point of suicide. Lucien too passes through this phase. He is on the verge of suicide, even having written a suicide note, when the devil approaches in the guise of criminal mastermind Jacques Collin/Vautrin/Abbé Carlos Herrera and turns him back to the third path. Namely, the rekindling of the lost illusions. We humans are a sorry lot after all. Quick to forget God’s grace. Quick too to forget the misery of our vice, self-deception, and illusions. Ultimately, this is where Lucien turns, right back into his illusions at the end of Lost Illusions and the beginning of Lost Souls.

Losing illusions does not equate with finding blessedness. But it is probably an essential part of the journey. Balzac’s Comédie Humaine is, of course, a direct nod to Dante’s Divine Comedy. And one might wonder if all of Balzac’s corpus is simply a descent into Hell without any hope of redemption. Perhaps. Surely, he does not reveal beatification like Dante. Yet his image of stripping away our illusions is as necessary as Dante’s; a stripping away of the false gods that can rule our lives and makes us miserable, just as Dante himself had to have his illusions stripped away in Hell and Purgatory.

There are many days I wish I were already in Heaven. One of the fruits of losing illusions is the understanding that this world shall never fully satisfy. And yet, another sobering truth about losing illusions is the realization that I am not yet cut out for eternal blessedness. In other words, I have not arrived. My sin. My brokenness. My bowing to false gods requires greater purification. And that purification is painful. It is for Lucien. So too is it for me. So too is it for all of us.

My hope is that the purification does its work. Turns me toward the light, and not toward bitterness and death. Not to other false gods. To other illusions.

I am thirty-five. There are literally hundreds more of Balzac’s works for me to read. I am grateful for that. Because I have not arrived. And Balzac just may be the man for my thirties. If so, I’ve got a lot of reading to do.

​​Jeffrey Wald writes from the Twin Cities. His writing has appeared in publications such as Dappled Things, The University Bookman, Genealogies of Modernity, and Front Porch Republic.