Probably, when one hears the phrase “the classical tradition,” the first name that comes to mind is not “Iggy Pop.”

And yet Iggy Pop, like Bob Dylan, has an avid interest in Roman antiquity and its genetic connection to contemporary life.

This startling fact is perhaps made most clear in a short missive called “Caesar Lives” that Pop penned for the guild journal Classics Ireland in 1995, a note that is at once darkly comic and genuinely illuminating. In it, the frontman of The Stooges describes his love affair with Edward Gibbon’s History of the Decline and Fall of the Roman Empire.

In 1982, horrified by the meanness, tedium and depravity of my existence as I toured the American South playing rock and roll music and going crazy in public, I purchased an abridged copy of The Decline and Fall of the Roman Empire (Dero Saunders, Penguin).

The grandeur of the subject appealed to me, as did the cameo illustration of Edward Gibbon, the author, on the front cover. He looked like a heavy dude.

Let us pause here. Did you notice what a good stylist Pop is? In fact, the opening sentence is a tour de force of classical Gibbonian English prose, a scrap of Ciceronian periodicity. He begins with a temporal marker, followed by a participle modifying the long delayed subject (“I”), itself filled out by a tricolon (“meanness, tedium and depravity”),[1] followed by a subordinate clause (“as …”) with two participles of its own (“playing … going crazy”), and then, at long last, the main clause (“I purchased …”). The vocabulary is overwhelmingly Latinate: “horrified,” “tedium,” “depravity,” “existence,” “public.” A shorter, but still Roman, sentence comes hard on the heels of the opener. Again, notice the Latinity: “grandeur,” “subject,” “appealed,” “illustration,” “author.” Cicero would often follow a long and intricate sentence with a short and punchy one for contrastive effect. Pop does the same, but for a vehicle uses a version of the so-called “Saxon finish.” After the sonority of the long words in the previous two sentences, he now gives us forceful northern monosyllables, and nothing else. The Latin has been replaced entirely by the Germanic: “He looked like a heavy dude.” 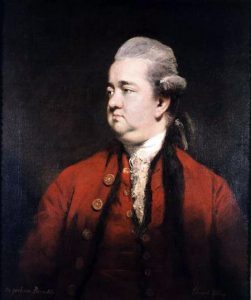 (And he did: see for yourself.)

But enough about style; back to substance—though Pop would doubtless ask us to wonder if there is a difference between the two. He recalls his initial encounter with Gibbon thus:

I would read with pleasure around 4 am, with my drugs and whisky in cheap motels, savouring the clash of beliefs, personalities and values, played out on antiquity’s stage by crowds of the vulgar, led by huge archetypal characters. And that was the end of that. Or so I thought.[2]

As you have likely guessed, dear reader, that was not, as it happens, the end.

A little over a decade later, “a piece of music strange to my ears,” he says, “called forth those ghosts to merge in hilarious, bilious pretence with the Schwartzkopfs, Shwartzeneggers and Sheratons of modern American money and muscle-myth.” The result was “an extemporaneous soliloquy[3] I called ‘Caesar.’” You can hear it on his 1993 album American Caesar. The thoughts that came to him spontaneously were not a coincidence. Why? “America is Rome. Of course, why shouldn’t it be? All of Western life and institutions today are traceable to the Romans and their world. We are all Roman children for better or worse.” It would be gauche to say so in the academy today, where even the term “Western” has become a byword. But one could utter such indignities twenty-five years ago.

Indeed, what Pop says is no different from what Gilbert Highet had argued at much greater length decades before in his imposing study called The Classical Tradition, first published in 1949 and recently reissued with a wonderful Foreword by Harold Bloom. This leaves us with a puzzle: the “Godfather of Punk” is the true heir of the Columbia classicist in a way that many of Highet’s own intellectual great-grandchildren would be embarrassed to be. But let that pass. Pop need not care about today’s delicate censoriousness.

More than that, it is just that naive unconcern for our pseudo-enlightened niceties that makes the rest of what Pop has to say so valuable. For Gibbon had not yet made an end of Iggy after his soliloquy. He tells us that his wife later gave him “a beautiful edition” of the complete Decline and Fall. “Since then,” he continues, “the pleasure and profit have been all mine as I enjoy the wonderful language, organization and scope of this masterwork.”

Pop then gives a list of a handful of the ways in which Gibbon and antiquity have been his teachers. Every single one of them is worth attending to.

“1. I feel a great comfort and relief knowing that there were others who lived and died and thought and fought so long ago; I feel less tyrannized by the present day.” Presentism is a sickness—even a sickness unto death. The point he makes here is similar to the one made by C. S. Lewis in his oft-cited 1944 essay “On the Reading of Old Books,” which originally served as an introduction to a translation Athanasius’s On the Incarnation of the Word of God.

“2. I learn much about the way our society really works, because the system-origins—military, religious, political, colonial, agricultural, financial[4]—are all there to be scrutinized in their infancy. I have gained perspective.” Presentism, in other words, doesn’t even enable us to understand the present. Without the past, we can make no proper sense of it. It is difficult to know where one is if one does not know where he has been. If you doubt that this is so, watch Christopher Nolan’s Memento in an idle hour. The past not only frees us from the fetters of the present; it gives us a vantage-point from which to understand it.

“3. The language in which the book is written is rich and complete, as the language of today is not.” This point concerns style. As we saw at the outset, Pop has taken Gibbon’s lessons in eloquence to heart, and it shows. The rich language of the past has enriched his language for the present.

“4. I find out how little I know.” This admission is paramount, both for Pop and for the rest of us. It is also thoroughly classical. According to Plato, Socrates’s awareness of his own ignorance was the primary impetus for his philosophy. Without it, we would not even have “philosophy” as we know it. But its roots are even deeper; they are found in one of the maxims of Apollo’s oracle at Delphi: “Know thyself.”

“5. I am inspired by the will and erudition which enabled Gibbon to complete a work of twenty-odd years. The guy stuck with things.” This is obviously about Gibbon himself rather than what Gibbon teaches us about the Romans. But persistence and dogged tenacity are virtues worthy of Cato the Elder, who, Plutarch tells us, ended every statement he made by saying “Carthage must be destroyed.” Eventually it was. So, unlike Carthage, Pop’s point stands.

I called Pop’s posture toward the ancients “naive” above. I should clarify that I meant it as a compliment. Too excited by what he had discovered for cynicism and snobbery, he instead asked the obvious but regularly ignored question, “What can these people teach me, not only about the distant past, but about myself and my world?” Not for the purpose of a mindless ideological agenda, but because of the deep-seated human desire to know, and because of the pleasure—so different from that of “drugs and whisky in cheap motels”—that accompanies the quest for knowledge.

Let us close as he does: “I urge anyone who wants life on earth to really come alive for them to enjoy the beautiful ancestral ancient world.”

Eric Hutchinson is associate professor of classics and chairman of the Collegiate Scholars Program at Hillsdale College.

[1] In learning this stylistic technique from Gibbon, Pop resembles, of all people, Abraham Lincoln, who got it from writers like Gibbon, who got it from Cicero, who got it from the Greeks. Cf. the remark of Gilbert Highet (mentioned below): “Lincoln could not read Cicero’s speeches; but this device [i.e. the tricolon], which was not native to the English language, he had learnt by studying the prose of baroque writers such as Gibbon, who were steeped in the cadences of Ciceronian Latin and skilfully reproduced them in English” (The Classical Tradition, 113).

[2] I cannot resist pointing out that this is another instance of Ciceronian structure—complete with another tricolon (“beliefs, personalities and values”) and a nicely balanced constrastive parallelism (“played out … led”)—followed by, yet again, the “Saxon finish.”

[3] A coinage of the Roman Christian writer Augustine, it is worth noting.

[4] All these words, of course, come into English via Latin.