Reflections on Natural Law, History, and the Enduring Legacy of Peter Augustine Lawler

It has been five years since the passing of Peter Augustine Lawler. Friends and readers may wonder what exactly he would have thought of the disorienting changes in American politics that have occurred during this period. From 2017 to the present, Americans have witnessed the rise and fall of a populist Republican president, the election of a nominal Catholic president, and a left-right civil war fought with an intensity that has not been seen since the late 1960s. Because Lawler did not live to see the stormy politics that have characterized the Trump and post-Trump eras, one can only speculate as to what he would have thought of our unnerving political era. In my judgment, his defense of the natural law tradition enjoys more enduring relevance than his polemics against historicism do. 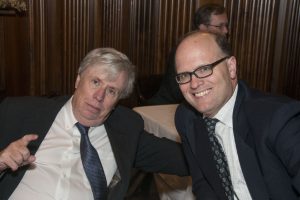 Writing as a patriot as well as a conservative Catholic scholar, Lawler was genuinely concerned about the fragility of the American republic. He also believed that the Catholic tradition, rightly understood (as he liked to say), is best suited to strengthen the foundations of this regime. Why does America need any strengthening at all? According to Lawler, most citizens of the republic do not adhere to the natural law tradition, which reveals fundamental truths about human nature. One of these truths is that human beings are made in the image of God. Without this truth, his fellow Americans would continue to surrender to the unnatural temptation to remake themselves through technological means. Put differently, Americans would misuse their freedom by treating themselves as if they were malleable objects that could be reconstructed at will. Absent in this process is any appreciation for the fundamental natural law teaching that our human nature is God’s creation, which is not to be confused with a mere mechanism that allows reinvention or reconstruction. Although most Americans identify themselves as Christians, the decline of belief in a soul, which transcends the mechanistic nature of the body, further contributes to this dangerous devaluation of human dignity. Ironically, this idolatrous attempt to replace God’s providence with the belief that Man can recreate himself in a new image and likeness only leads to the technological dehumanization of modern man as a whole.

How did this devaluation of the natural law tradition in American modernity happen? According to Lawler, considerable blame for this spiritual crisis should be laid at the feet of John Locke. Locke’s influence on America’s political traditions has inspired a libertarian ethic that celebrates the free market’s principles of contract and consent as the guiding principles for every aspect of life. As a result, Locke’s philosophy, as Lawler interprets it, provides no objection to the exercise of the freedom to create whole new identities, freed from any natural constraints. Locke’s rejection of the teleological metaphysics of Aristotle and Aquinas, who taught that the natural purpose of humanity is to seek and practice virtue, led to his predictable conclusion that human existence has no ultimate purpose. Instead, human beings should just focus on their biological survival, contriving their own individual purposes in accord with their material desires. Additionally, Locke’s denial of the possibility of innate ideas generates the impression that he saw human nature as so malleable that science and technology can easily reinvent or discard it in favor of something more “liberating.” What Locke famously called the “natural right” to a life of freedom has nothing to do with living according to a transcendent or natural order. Rather, Lockeanism holds out the freedom to escape one’s nature altogether. As Lawler put it, today’s “creeping libertarianism is starting to get pretty creepy.” Lest anyone believe that his judgment is excessive or overstated, it is worth recalling that Ketanji Brown Jackson, who is now confirmed as an associate justice on the Supreme Court, recently could not define what a “woman” is.

Still, Lockeanism is not the only obstacle that impedes the restoration of the natural law tradition. This ideology works hand in hand with the doctrine of modern historicism, which teaches, according to Lawler, that there are no transcendent truths outside of history. Rather, all ideas are mere epiphenomena of a given historical period; none of these ideas can claim to be an absolute truth that transcends the period in question. The changeable currents of History, as opposed to the eternal verities of Nature, determine how we human beings think or act, leaving us without any understanding of the permanent truths revealed within the Bible and premodern philosophy. Lawler went so far as to accuse Locke of unwittingly advancing a “proto-historicism,” which denies to nature the authority to give “self-creating beings” anything of value.

Informed readers will immediately recognize here the influence of Leo Strauss’s teachings on Lawler’s thought. Strauss is famous for targeting historicism as the false doctrine that all ideas are relative to a historical period and that human beings lack the wisdom and freedom to defy the irreversible movement of “History.” Lawler deeply respected Strauss for attempting to revive the natural right tradition in political philosophy, which teaches that there are universal truths that transcend the changeable opinions and conventions of history. Although he rejected the Straussian teaching that this idea of natural right does not require a religious (that is, Christian) foundation, he was convinced that it is a valuable teaching to impart to Americans who were mesmerized by Lockeanism and historicism. Like Strauss, Lawler was also convinced that historicism turned “particular persons with names into ‘History fodder,’” who should be “sacrificed for either the coming end of History or their country’s profound Historical destiny.” The “postmodern Thomism” that Lawler defended agreed with Strauss that humanity is not a “Historical creation.” Consistent with Strauss’s critique of historicism, Lawler insisted that man “is stuck with virtue no matter how people transform their world.” In short, he was confident that modern ideologies and technologies could never successfully abolish or reinvent human nature.

Strauss’s critique of historicism applies very well to crude versions of historicism (e.g., Marxism-Leninism). However, as I have argued elsewhere, Strauss never demonstrated that all versions of historicism necessarily lead to relativism and determinism. Historicism need not teach that nature is irrelevant or that human beings are hapless prisoners of their historical contexts. Rather, conservative historicists emphasize that we can learn about nature and truth only if we also recognize, as Burke did, that these realities are unintelligible apart from the lessons of historical experience. These lessons often reveal that cultures and civilizations are not equally wise, virtuous, or creative. The fact that we can also change or resist the dogmas of our time hardly contradicts historicists (e.g., Vico) who believe in the freedom of human beings to create history anew.

It is a safe bet that Lawler would have rejected this understanding of historicism. In response to the paleoconservative historicism that Paul Gottfried and I have defended, Lawler once wrote: “We have to admit that the value-centered historicism or whatever recommended by some conservatives as the rhetorical/theoretical ticket ain’t sweeping America.” Although he kindly acknowledged his sympathy with parts of Paul’s and my “criticism of Straussian West Coastism and its civil theological tendencies,” historicism in any guise struck him as a dangerous doctrine that must be avoided.

In fairness, Lawler never denied that history matters. He also admitted that Strauss’s dualistic distinction between “Natural Right” and “History” is “surely rhetorically exaggerated.” Yet Lawler’s preferences for a liberal democracy with a virtuous soul and postmodern Thomism have not exactly swept America in the Trump and Biden eras. What has come to dominate the grassroots of the American conservative movement is the historicist concern that the distinctive character and traditions of the republic are under threat. The populist right categorically rejects the neo-globalist agenda that promotes an ahistorical universalism at the expense of the well-being of most Americans. Policies that support open borders and free trade are driving working-class Americans into the hands of the Trumpian GOP. The danger of democracy devolving into oligarchy, of which Lawler’s philosophical hero Orestes Brownson warned in the nineteenth century, is all too real today.

Lawler was not oblivious to these issues. In a University Bookman symposium on immigration that occurred a few months before his death, he soundly attacked the alliance of progressive and libertarian elites who defend unlimited immigration and open borders while ignoring the lower wages and devalued sense of citizenship that result from these policies. Lawler admitted that “Our populists are often right to make civic—someone might say civilized—claims against our complacent oligarchs.” Moreover, “the legitimate claims of loyal citizens resisting manipulation by a cosmopolitan elite in some undisclosed location (symbolized by Wall Street and Silicon Valley) aren’t xenophobia.” Still, he also worried that Trumpian populism threatened the sense of “solidarity” that Americans have often felt towards their fellow human beings around the world. Once again, he rejected the “rhetorically exaggerated” choice between nature and history.

What is missing in Lawler’s thought is any precise prescription on the way forward, even though he clearly understood the problem. If America’s oligarchic elites on the left and the right are hellbent on imposing destructive economic and social policies while manipulating the citizenry into accepting them without complaint, nothing short of a counter-revolution from below will be successful. Although Lawler’s temperament was perhaps too gentle to fully endorse this conclusion, his final reflections may well point toward it.

Grant Havers is Chair of the Department of Philosophy at Trinity Western University (Canada). He is the author of Leo Strauss and Anglo-American Democracy: A Conservative Critique (Northern Illinois University Press, 2013).