A Crisis and the Heroic March of Medicine 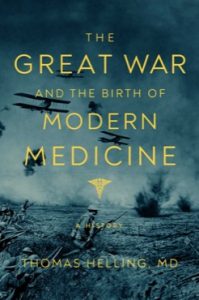 The inscription on Dr. Thomas Helling’s book, The Great War and the Birth of Modern Medicine: A History gives away the game. It reads, “From the evils of mankind comes improbable redemption,” and the book is dedicated, “For all those men and women who must confront the horrors of war.” What the author, professor of surgery and head of general surgery at the University of Mississippi, accomplishes in his exploration of how the conditions of world catastrophe gave rise to medicine at last properly modern, is a review of the “why”—as in the challenges faced—and the “who”—those who acted, and what prompted them to act.

This book is intended for and will interest the general reader, for in his review of the developments in knowledge, technique, technology, and practice, Helling focuses more on the philosophy and practice of the science of clinical medicine, and less on descriptions of technology. He also delves into the lives and motives of his heroes, those who, in confronting the horrors of war, changed how we think about the human person and the battle against disease and injury.

When a layperson requires medical care, regardless of how little knowledge of medicine, or even his own bodily functioning, he or she may have, there is yet an assumed knowledge of what medicine involves, including prompt intervention, diagnostic imaging (like X-rays), aseptic technique, the battle against infection, and so on. These practices became common because of the conditions of the First World War, a conflict in which physicians and surgeons suddenly confronted perhaps thousands of casualties in a single day, often patients presenting with the grave injuries inflicted by modern weaponry like the machine gun, long range artillery fire, and poisonous gas. Physicians not only had to deal with injuries, but illnesses and complicating infections the causes of which were literally unknown (as in gas gangrene), or at best the subject of theories involving unknown mechanisms that might range from microscopic vessel tears to derangement of nervous conduction (as in so-called “shell shock”). Groundwork had certainly been laid in some areas (X-rays and aseptic technique, particularly), but to be able to both systematize and apply new learning quickly, and on a well-nigh industrial scale, involved work that required in like measures exhaustion, the sharing of insights, conflicts with established authority, and careful inductive reasoning on the basis of mass observation and measurement.

Helling begins his narrative with what will seem very basic even to a layperson: the idea that injuries requiring surgery generally require swift intervention. But the concept of prioritization (triage) and prompt intervention was itself contrary to the established wisdom that bullet wounds should be left alone, lest the surgeon infect a patient who might heal on his own. In an age before antibiotics, an argument to avoid intervention was not illogical. Indeed, it was only by WWII that antibiotics (and readily available blood transfusion and plasma infusion) would come into real use, but even in that second war, the ability to establish an airway in a dying patient was limited to tracheostomy at best.

Helling’s writing style is not simple, and in the first chapters it is least secure, for he has to spend more time speaking about what has gone before (such as the rationale for benign neglect). He comes into his own in focusing on the investigative techniques of such legendary surgeons as George Crile and Harvey Cushing, the pioneering of reconstructive surgery by Hippolyte Morestin and Harold Gillies, and the debates over whether or not “shell shock” represented a psychological/moral failing or physical injury. He is more at home in teasing out theories and arguments than in description, and he is at his most passionate in describing the use and effects of poisonous gasses. The book is meticulously researched, with copious citations and annotations involving primary sources in ways that lend flavor and currency to the debates that advanced the standard of care.

More than a century later, in the midst of another public health emergency involving the mobilization of vast resources, and debates between public authorities and scientists “at the coal face,” we can be grateful that physicians with real hands-on and eyes-on experience in treating sick and injured human beings found the energy and arguments to prevail over the established “wisdom” and the consensus of opinion—for example to not operate on a gunshot wound, or to not just label what we now recognize as both acute and post-traumatic stress disorder as a “lack of moral fiber.”

Helling demonstrates—with little overt argument—that in the give and take of shared experience and opinion, one or a few dedicated physicians and/or scientists could and did make a difference in ways that still affect our lives. And he demonstrates that when states throw any sizable percentage of what is spent on weaponry at the problem of how to deal with the results of weaponry, breakthroughs can happen. Crisis becomes the pressure cooker of insight and innovation, sometimes by sheer weight of numbers.

Indeed, crisis can lead to focus, as in the rapid shift from a research model in which physicians undertook clinical, pathological, or epidemiological studies in the time their practices allowed, to one in which scientists (who may or may not be physicians) can conduct basic research independent of the pressures of day-to-day attendance on patients (and sometimes hordes of them). World War I and the attendant Great Influenza pandemic (also discussed in this book), by any measure meet the criteria of crisis. What Helling accomplishes in telling his story is to provide insight that crisis denotes decision/judgment, but that for this to happen requires not just knowledge and skill, but knowledge and skill found in individuals who care. Every one of the men and women whose work is described in The Great War and the Birth of Modern Medicine was a person who cared enough to almost break him- or herself in seeking an answer, a cure, and improvement in the lot of those gravely insulted in body, mind, and spirit. We can be grateful for their passion, and grateful that Thomas Helling has skillfully brought their stories to us cloaked in the story of progress.

The Rev. Dr. Karl C. Schaffenburg is a retired Episcopal priest serving in parish ministry in Mississippi, having previously served in legal, policy, and intelligence roles in the pharmaceutical industry in the United States and Europe. Fr. Schaffenburg has previously authored reviews and policy analyses in Russian and Irish political culture, philosophy, history, and cultural criticism. His education is in law and theology.