A Grateful Defense of the West 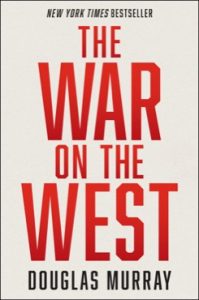 This book surveys the West’s self-inflicted mortal wounds from its “culture of repudiation,” which threaten our ability to pursue a good life lived in common in peaceful, well-ordered, and stable societies. This war strikes at the very foundations of who we are. As Murray writes, “The War on the West is a book about what happens when one side in a cold war—the side of democracy, reason, rights, and universal principles—prematurely surrenders.” Whether we on the right can agree on these foundations is part of the problem.

The book is structured around four main chapters and three interludes. The chapters discuss the battlefields on which Murray sees the wider war on the West being fought: Race, History, Religion, and Culture. The interludes discuss China, Reparations, and Gratitude. This structure presents the narrative effectively, each chapter linking together while the interludes serve to simultaneously break up the flow in such a way as to make the reader pause in reflection, while also tying the wider narrative together with underlying themes that illuminate the main argument.

Murray delivers his argument with a force that is both justified and does justice to the subject matter. The central claim, that there is an assault on Western culture, its heritage, and the people who created it—an assault that has been underway for decades—is indisputable. The marshaling of so much damning evidence in one place is useful to those whose intuition is that the ground is slipping from under their feet but who lack the time to pursue the various threads of the conflict in their day-to-day lives. For the terminally online and politically engaged, Murray’s book is an extremely useful compendium of examples of something that goes far deeper than mere “wokeness” or “culture war,” ready to be presented to the willfully blind who ask what all the fuss is about or who accuse the right of fomenting a culture war (when in fact the right often just notices what is happening).

Beginning with “Race,” Murray illustrates how “in the place of color blindness, we have been pushed into racial ultra-awareness.” He catalogues the anti-whiteness in much of today’s attacks on the West through the implementation of Critical Race Theory. As a result, “Everything in the past is seen as racist, and so everything in the past is tainted,” while “if other countries do have any racism, it must be because the West exported the vice to them.”

This feeds into the chapter on history, all of it condemned out of hand by the attackers. Statues and memorials to historical figures from Columbus to Jefferson, from Lincoln to Washington, from Gladstone to Churchill, even down to the poet Ted Hughes, are defenestrated for actively commemorating “dead, white males” or implicitly as part of a past indelibly stained with racial sin. A concerted effort to rewrite the past of America and Britain, lately through the 1619 Project and other such travesties, was attempted across popular, high, and academic culture for years, the intensity heightening since 2020. Murray rebuts this revisionism by pointing to Britain’s ending the slave trade, warring on slavers, the genocidal Arab slave trade of 18 million African men (all castrated), and the continuation of slavery today to the tune of 40 million souls.

This counterbalancing is sorely needed, and is repeated when Murray turns to the chapters on religion and culture. Each recounts the many and varied moves to invert each of these aspects of Western life into their opposite. Churches become woke and repudiate orthodox teachings, and any part of Western culture that falls short of the beliefs and practices of our new successor faith, which means all of it, is subject to a revolution within the form. This cultural and religious inheritance gives meaning and purpose to those who yearn for beauty and sacredness in a fallen world. The literature, architecture, art, and music handed down are emblematic of a past that connects the individual to the world beyond themselves. For me, these echoes of the past in the present have given the consolation of connection in a life lived with a disability that has at times been an isolating experience. To witness the sources of this connection attacked and erased has been a source of pain to add to the physical trials.

However, I had reservations concerning Murray’s full-throated defense of the legacy of the Enlightenment, which Murray argues provided “the philosophical bases for the principles of toleration, the utility of reason, and the separation of church and state.” First, it is debatable whether these innovations were entirely due to certain eighteenth-century thinkers. The idea that “the utility of reason” was unknown before the eighteenth century would have been news to the Renaissance humanists, or Thomas Aquinas, or many Church Fathers. The separation of church and state began in Europe in the medieval period, and took greater hold through conflicts driven at different times by European monarchs and various Popes.

Attacks on figures like Voltaire, Hume, and others for “creating racism” may indeed often be bad faith, relying on selective readings from shoddy scholarship, but the introduction of the naturalistic, secular materialist worldview by the Enlightenment undoubtedly fed into the scientific socialism and the social Darwinism of, respectively, the nineteenth and twentieth century Left and Right. Science since the Enlightenment is a product of the human spirit and will, subject to the virtues and vices of these, as are all our creations. Science keeps me alive. Yet scientism as practiced in the early twenty-first century has the same currents that contributed to its lethality in its twentieth century instantiation. Noting this is not simply to capitulate to anti-Western Marxism.

Another issue is that, beyond gestures at race-baiters and Marxists, Murray does not clearly define who is warring on the West. The book lacks statistical analysis that could have contributed to the explanation of these assaults. Reference to studies like the Hidden Tribes survey from More in Common, which revealed only 6-8 percent of Americans support “wokeness,” along with similar findings in the UK, would have lent analytical strength to the undeniable force of Murray’s argument.

The book thus tends towards the propensity for what James Davison Hunter calls the idealist fallacy, where individuals and ideas shape social change more than institutional networks and social structures. As Hunter writes, the motor of sociocultural change “in history is … the network and the new institutions that are created out of those networks.… This is where the stuff of culture and cultural change is produced.” Furthermore, “the work of world-making and world-changing are, by and large, the work of elites: gatekeepers who provide creative direction and management within spheres of social life. Even where the impetus for change draws from popular agitation, it does not gain traction until it is embraced and propagated by elites.”

Following James Burnham, instead of a case of “barbarians at the gates,” I would argue that we are experiencing the latest iteration of the managerial ideology of a ruling class. The pushing of this conflict by the social, political, and economic structures cited earlier seems a strange sort of Marxist revolution when it is disseminated by neoliberal capitalism as practiced by our overclass. Indeed, the impulse motivating the drive to repudiate the heritage of the West is perfectly consonant with capitalism. Each reinforces the other’s erasure of history and hierarchies, commodifying culture and traditions to sell them in the global market. The overclass goal of the dissolution of social and cultural ties of the governed is pursued in service to the entrenchment of their sociopolitical power and economic oligarchy. Seen in this light, the war on the West is a class war: a divide-and-conquer campaign setting different social groups against each other, while also between the left wing of the overclass and a nascent right-wing counter-elite. This synthesis of idealist and materialist perspective adds much needed context and analytical power.

Even so, Murray’s book is a force to be reckoned with. Despite the reservations mentioned above, the defense of the West’s culture, religion, and history left me feeling heartened and glad to have been born when I was, where I am. The most important part of the book is Murray’s reflection on gratitude. What we have is a mix of agency and contingency, human action combined with the givenness of the human condition to produce the giftedness of our existence. We who live in the West should honor those who, in whatever way, gave their tomorrow for our today. The job of our social conservation is to include more people in our societies in the social and cultural goods handed down to us, not to destroy those goods as such, leaving us equal in our share of the rubble.

Henry George is a freelance writer living in the UK. He holds an MA in War Studies from King’s College London. He tweets at @intothefuture45.