A People’s History of Philadelphia 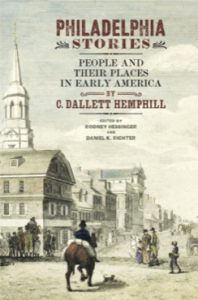 Philadelphia Stories: People and Their Places in Early America is a unique book: a series of twelve mini-biographies themed around faith or business or gender and spanning the late pre-Revolutionary era to the antebellum years. C. Dallett Hemphill (who died in 2015, and whose largely completed manuscript was finished by colleagues and associates) focuses on people of some note, but not on the Founding Fathers, or exclusively on major political or society figures.

If this seems to suggest something left-wing, such as Howard Zinn’s “people’s history” schtick, Hemphill’s work is far less ideological. It is, in fact, quite practical; he tells the stories of notable but mostly ordinary individuals, thereby not only painting a broader picture of early Philadelphia itself, with its relatively small social circles and intertwined families, but also in some ways making the mostly missing Founders more accessible. We learn, for example, that several of the profiled individuals entertained or visited George Washington, Thomas Jefferson, or Philadelphia’s own Benjamin Franklin. Deborah Logan, an educated Quaker wife and an avid writer, entertained all three. Various Founders dined at the home of future Episcopal bishop William White. A conflation of Revolutionary-era history with such prominent figures not only paints a narrow picture of American history, but in some ways shortchanges and simplifies the lives of the Founders themselves.

The result of this approach is a highly readable history book with a familiar backdrop but generally unfamiliar details and main characters. This is enhanced by Hemphill’s attention to the city of Philadelphia itself, which was walkable, relatively small, and marked by both a high level of diversity and high civic participation. “From the beginning Philadelphia was more of a salad bowl than a melting pot,” she writes. “What made Pennsylvania, and Philadelphia in particular, so disorienting was that no single ethnic group or religious persuasion held the levers of power, that no dominant group was in a position to grant toleration to less privileged communities who understood they were minorities in a land controlled by others.”

The absence of a state church, which generally covered various charitable and bureaucratic functions as well as those relating to faith, left a void in Pennsylvania’s social services and administration. Hemphill argues that this void sparked a new and uniquely American approach to civic engagement and the participation of ordinary people in public affairs and social causes. And the epicenter of this emerging “culture of voluntary organizations” was Philadelphia.

We also learn plenty of history and trivia about the physical fabric of Philadelphia itself. Anthony Benezet, a French-born Quaker philanthropist and teacher, lived in one of the city’s first brick houses. One of his friends grew pineapples in a backyard greenhouse. Many of the book’s characters ran into each other informally: “Citizens could experience random encounters in what was still a ‘walking city,’” even into the 1800s. We learn that Henry Muhlenberg, a high-profile Lutheran who vied with Moravian bigwig Nicolaus Zinzendorf for the leadership of Lutheranism in America, eschewed Philadelphia itself for the outlying suburban community of Trappe, which he found more tranquil, and an easier place to raise children. (It is fascinating how far back such dynamics go.) By the early 1800s, Deborah Logan’s 1760s childhood neighborhood had been completely transformed: not only in terms of architecture, but in terms of use, shifting from mostly residential to mostly commercial. In a time when the urban population largely embraced new construction as emblematic of progress, businessman Stephen Girard built the first full block of now-iconic Philadelphia rowhouses.

The city’s suburban edge grew along with its modernizing commerce, beginning to take a form more readily recognizable today. Sarah Tyndale, a widow who revitalized her late husband’s bankrupt china business, opened a new store in 1839 with large plate-glass windows, fifty gas lamps for interior lighting, and hours till nine p.m. And by the 1850s, the city was no longer congruent with its original historic core hugging the Delaware. A home in then-suburban West Philly, with rail service to the core, could be had “for the same expense as a narrow & confined dwelling on a pavement, surrounded by brick walls and all the unpleasant sights & sounds of a crowded town,” Hemphill quotes “upper-class diarist” Sidney George Fisher. The customary combination of artisan shops with living quarters above or behind was also beginning to give way to larger factories and stores, and separate residential units or areas. Charles Willson Peale opened America’s first major public art gallery and possibly its first true museum, which inhabited a series of progressively larger Philadelphia buildings.

And, in an amusing anecdote, Hemphill recounts that rowdy Philadelphia youth in the 1700s would fire guns in the air to mark New Year’s Eve. She notes that this particular form of celebration persists in Philadelphia today. There is truly nothing new under the sun.

The progression of the city’s size and built environment makes it a character itself, and allows the reader to sense the gradual growth of Philadelphia from what is now its quaint historic district to the big city we know today. Hints of that past are sprinkled all over contemporary Philadelphia, and hints of its present are sprinkled throughout the book.

In terms of social trends and attitudes, there’s much that is more or less unintuitive, even unrecognizable, to a modern reader. The cult of “sensibility,” to which Deborah Norris was devoted, is about as comprehensible as TikTok is to someone over twenty. The attitudes around marriage, particularly arranged marriages for economic reasons, would seem to clash not only with personal autonomy but with a genuinely Christian understanding of the institution. The contentious debates over whether prostitutes needed moral reform or material help, or over the high-church or low-church future of Anglicanism in America (i.e. Episcopalianism), can seem quaint.

Nonetheless, the emergence of recognizably modern thinking—without lack of religion—is obvious. For example, William White, the future Episcopal bishop with high-church tendencies, rejected the notion that infectious disease outbreaks were a form of divine punishment: “By going a very little way into the country, there was perfect safety,” he wrote. “But can divine judgements be thus easily escaped?” Material and medical progress and inventiveness unfolded as things came to be understood, and as metaphysics left the equation. But this was not understood to be at odds with faith.

Hemphill deals with America’s shortcomings critically, but traditionally, looking towards the fulfillment of the American promise rather than denying its possibility. “Taken together, the fate of women and Blacks means that for the majority of Americans, the Revolution entailed great promise but muted immediate impact.” She writes with caution and reserve on the very real hypocrisies and contradictions in our nation’s history.

She also illuminates how contentious things like slavery and Indian policy were, even in the 1700s before the tensions of the antebellum period. These evils were not inevitable or preordained; Americans did not unite homogeneously behind them. The nationally famed African-American musician Francis Johnson (known as Frank) often suffered racist vitriol and sometimes attacks on his band, but many of the cities he toured—including as far away as St. Louis—embraced him and recognized his talent. Newspapers in cities marred by riots or other incidents often decried such racism and praised Johnson. Johnson, for his part, was a devotee of “respectability politics” in public, while, obviously, privately hurt and angered by the racism and condescension he frequently encountered. In the chapter on Johnson, she explains, “Philadelphia’s whites mostly opposed any advances by Philadelphia’s Blacks, which only made the embattled minority group redouble its self-defense efforts. It was a vicious cycle.”

On the question of class and inequality, Hemphill is equally subtle and thoughtful. She does not detract from the personal qualities that unquestionably aided the success of her successful profiles. She recounts their personal lives and habits in great and sometimes amusing depth. Yet, without denying individual responsibility, she makes clear that it was not sufficient. On the successful habits and gambles of incredibly rich businessman and banker Stephen Girard, she writes, this “cannot be said to have been a formula available to or equally efficacious for other Philadelphia merchants. There were some, like Girard, who came to the city with little and prospered. But there were many more who failed or only succeeded on a much more modest scale.” Girard, for his part, was so wealthy that he was able to persuade the city of Philadelphia, from the grave, to tear down all its fire-prone wood structures and prohibit any new ones, along with a series of other public improvements: he made an unprecedented bequest to the city in his will, with the money contingent on their passing laws to ensure his desired improvements!

Hemphill turns every character, from Francis Johnson, to Stephen Girard, to the snobbish, elitist Grace Growden Galloway, into full people, with complicated attitudes and opinions defined in part by their times and surroundings—but also ultimately by their own lights.

Addison Del Mastro writes on urbanism and cultural history. He tweets at @ad_mastro and writes daily at Substack.