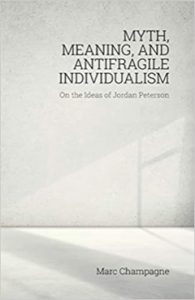 It is impossible to understand Jordan Peterson’s incredible popularity without first understanding the spiritual barrenness of the post-religious West. Man is a liturgical animal. The fanaticism of modern “social justice,” the apocalyptic eschatology of contemporary environmentalism, and the dogmatic orthodoxy of woke identitarianism can all be seen as haphazard attempts to reconstruct a sense of order and meaning in a rapidly secularizing world. These new expressions of the religious impulse provide a fleeting sense of collective identity and purpose, but they fail to satisfy the human longing for truth and beauty. Dr. Peterson’s meteoric rise from an unknown psychology professor at the University of Toronto to an international celebrity is driven by the pervasive longing for something deeper and more substantial—a fullness of meaning that cannot be provided by the various activist iterations of the postmodern project.

This is the backdrop for Marc Champagne’s Myth, Meaning, and Antifragile Individualism: On the Ideas of Jordan Peterson, which attempts to understand Peterson’s thought in the context of the Nietzschean “death of God”—that is, the loss of confidence in the religious truths and transcendent ideals that traditionally sat at the foundation of our civilization. Peterson’s reassertion of concepts like individual agency and moral truth distinguish him from the intellectual currents of the age: “He stands out from regular pundits because he complements his critical stance with a comprehensive account of what a good life and a good society might look like,” Champagne writes. “This resonates with a lot of people. Every time a new calamity makes the headlines, mainstream commentators and journalists who put ideology before truth lose credibility, while Peterson gains a bigger audience.”

Of course, this also makes Peterson a source of enormous controversy. The Canadian psychologist regularly provokes vehement condemnations from the gatekeepers of our mainstream institutions, making him something of a countercultural icon with his young fan base. His appeal is that of the radical or the revolutionary, subverting the dominant ideological regime by criticizing the pieties of the intellectual class and straying beyond the bounds of acceptable elite opinion. That his widespread success has not occurred in spite of his critics but because of them is yet another testament to a declining popular faith in the reigning left-liberal orthodoxy.

Unfortunately, Peterson’s ostracization from the intellectual mainstream has also led to a deficit of legitimate academic treatments of his ideas. But Myth, Meaning, and Antifragile Individualism engages with him as a serious thinker whose unique appeal is derived from his defense of a world of ordered meaning in which individuals have both an ability and an obligation to choose truth and the good over nihilism and degeneracy. In our current moment, Champagne writes, these ideas are nothing short of revolutionary:

Peterson thinks there are right and wrong answers to moral questions, but importantly, he does not think those answers can be arrived at by the simplistic power games of group identity politics. As a result, many young people are being exposed—some for the first time—to the option of thinking clearly and taking individual responsibility (instead of emoting loudly and making grand excuses).

This is a view that has traditionally been defended by political and religious traditionalists against the tide of relativism, rationalism, and secular “social justice.” Peterson is no devout believer—he regularly cites Nietzsche as a source of philosophic inspiration—but is, paradoxically, a firm partisan of the Judeo-Christian tradition. He “accepts that ‘[t]he death of God in the modern world looks like an accomplished fact,’” Champagne writes, but “nevertheless thinks that something important has been lost along the way … according to Peterson, to jettison God is to jettison the idea of a supreme ideal.”

It would be easy to reductively call Peterson a sort of utilitarian conservative, defending the social function of institutionalized Christianity without believing in it himself, but Champagne argues that his views of religion are more complex. Citing Carl Jung’s theory of “archetypes,” Peterson argues that there are foundational truths that can be located by looking for what Champagne describes as “constants that emerge when comparing diverse myths and stories,” and that these recurring archetypal images and symbols are written into nature and our own biology. Peterson incorporates evolutionary psychology into his account of society’s narratives, maintaining that “some patterns essential to biological survival have become ingrained in our cultural practices and psyches,” Champagne writes. Our sense of ordered meaning in the world relies upon the context we exist in, and that context itself is shaped by a natural environment and set of biological imperatives. “As a result,” Champagne writes, “social reforms cannot disregard millennia of biological adaptations.”

From this point of view, religion embodies a set of core unchanging insights that are rooted in the laws of nature but are expressed through a context-specific patchwork of myths, metaphors, and patterned stories that provide humans with a vision of the good. “Humans need descriptions of the world not just as it is, but also as it could be,” writes Champagne. “This makes the world meaningful. Viewed in this light, religions supply us not with idols, but with ideals.” These ideals are useful because they teach us how to live well, but in so doing they reflect a certain truth about the meaning of the world we inhabit. Myths and symbolic archetypes are the application of a collective body of human knowledge, accumulated over time, into a set of prescriptions for courses of action to follow in the face of the unknown. “The great myths and religious stories of the past … did not concern themselves with what the world was,” Peterson writes in his book Maps of Meaning, “but with how a human being should act.” This is a social function that science—which can describe the world but cannot imbue it with meaning or moral purpose—is incapable of providing.

Champagne often describes Peterson’s philosophy in terms that are reminiscent of conservative thinkers like Edmund Burke, articulating a view in which culture is “a web of conventions and practices woven by humans to coordinate their individual actions and collective undertakings,” preserving and promulgating “whatever measure of order and security humans have managed to construct over the centuries.” As Burke famously wrote, “the individual is foolish … but the species is wise”; society’s traditions and customary belief systems are the result of centuries of human trial and error, comprising a collective wisdom that is passed down through the generations, stewarded and adapted to the changing necessities of different historical contexts but reflecting a set of core principles across space and time. Echoing this, Champagne writes: “Peterson’s evolutionary account is that if a cultural practice is preserved for generations, then that practice must have benefitted us in some way—otherwise it would have been pruned long ago. We should not disregard behavioural adaptations that have served humans for millennia.”

But is Peterson a Burkean? Is he even a conservative? He certainly has all of the right enemies; his famously antagonistic relationship with so-called “social justice warriors” is what catapulted him into the public eye in the first place. As Champagne points out towards the end of the book, however, the shortcomings in Peterson’s critique of left-wing campus activists are illustrative of more fundamental problems with his philosophy. Peterson’s evolutionary account of morality attempts to replace divine revelation with rational logic, transplanting an appeal to God with an appeal to empirical observations about the social utility of religious morality as the basis for following the Bible’s teachings. The purpose of Christianity, in this view, is self-actualization, providing a roadmap for the cultivation of purpose and meaning in one’s capacity as an individual. And yet, “while Peterson articulates an evolutionary gloss of Biblical texts that supposedly recommends hard-nosed self-reliance, the young people who yearn to defend ‘the oppressed’ go straight to the core and heed religion’s altruistic message of self-sacrifice,” Champagne writes. “It is an unsophisticated and naive response, to be sure. But, precisely for that reason, it shows the essence of the doctrine.… The Bible’s main message is arguably its advocacy of self-sacrificial altruism, not rugged individualism.”

How are we to adjudicate which code of morality should be privileged over the other? Both reflect aspects of our moral inheritance, as Champagne points out, so Peterson’s standard defense—that a moral system’s authority lies in its having existed for a long period of time—is of little use in answering such a question. Peterson regularly derides the “collectivism” of the social justice warriors, but lacks a foundational moral basis for his assertion that his alternative is more true. His defense of tradition is a welcome counterpoint to the radical fervor of our age, but firm first principles are required to decide which part of a tradition to heed at any given moment, lest the traditional tool of resistance to relativism risk descending into relativism itself. In this sense, Peterson’s ideas are an important step in the right direction—away from the various ideological defects of our time—but are nonetheless incomplete.

Champagne makes these critiques cogently, charitably, and in the spirit of friendship rather than enmity. He shares many of Peterson’s fundamental misgivings about the collectivist and relativist threats of our time, and dissents from his subject in the name of finding better ways to push back against these ideologies, rather than defending the ideologies himself. It is an important undertaking, given Peterson’s significance as a cultural phenomenon and the relative lack of serious engagements with his ideas. For these reasons and more, Myth, Meaning, and Antifragile Individualism is an invaluable resource for anyone who is curious to understand one of the most interesting public intellectuals of our time.

Nate Hochman (@njhochman) is an associate contributor for Young Voices and a 2021 Publius Fellow at the Claremont Institute. His work has appeared in outlets such as National Review, City Journal, The American Conservative, and Spectator USA, and he is a regular guest on television and radio.