A Prodigal Search for Self and the South 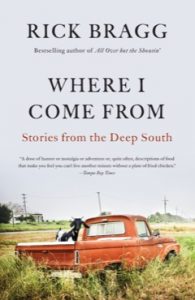 Where I Come From by Rick Bragg was published a few months before Uprooted by Grace Olmstead, and has strong resonances with it. Bragg’s book is about home—the home he left to pursue a career, the home he keeps returning to—and considers many of the same issues. It is more of a memoir than Uprooted, being in fact a fixup of magazine articles about “the South” from the last decade. It does still have a thesis: the pieces included concern “the South’s gentler, easier nature,” “things that make this place more than a dotted line on a map or a long-ago failed rebellion.” Though not “a cold-blooded examination of the South … it is not all harps and flowers, either. It touches, now and then, on a South that breaks our heart.”

Bragg’s book, then, is not merely a book about home, about the South—it is an attempt to define what the South is and isn’t, and is therefore part of a long continuity in the Southern tradition. It may also remind us of Rod Dreher’s The Little Way of Ruthie Leming, which, like Uprooted, is a book about a “metropolitan elite” returning home and finding something that was missed before. Like Bragg, Dreher is writing about his slice of the South, and trying to reckon with its complex legacy, though the legacy Dreher deals with is more personal.

Bragg is clear about what he wants to consign to the dustbin of history: “not the veranda South, the cotillion South, only the South I write about the most, the one a person can love without qualification or reservation, without having to explain your damn self … not the South of meanness and small-mindedness, not the political South that yearns to turn back time.” There is a lot of this polemic against the remnants of the Southern aristocracy, almost casually laid out: “It was a southern voice, but proper, educated-like, but not too proper, not the voice of a man who would look down on her,” for instance. Bragg is also persistently clear about the role of the past in Southern memory: “I do not need a statue or flag to know that I am Southern”; talking of his aunt, “she was perhaps most comfortable in the past, but not in a search for some doomed ideal.” There are many examples of both sentiments in Where I Come From. In this explicit execration of the aristocracy and the Confederate past, Bragg resembles nothing so much as those Richard Weaver called the “Southern liberals” of the late nineteenth century, aiming to envision a South beyond the legacy of slavery.

Bragg wants to offer a different and better South: “The Best of Who We Are,” as he puts it on a few occasions. What is this alternative South? “I can taste it in the food, feel it in my heart, and hear it in the language of my kin”; the dream of the good South is summed up in Southern Living magazine; its greatest city is New Orleans, with its music, architecture, and po’boys; its greatest people are Bragg’s own people, the humble backwoods people of the red clay, who are definitely not of the cotillion South. Poor whites are often the left-outs of the Southern story—Walker Percy makes this point in his introduction to Lanterns on the Levee, and depicts them with admiration in the bayous of The Moviegoer—and Bragg is here to make his and their claim on Southern culture.

How does he fare in this task? The format of the book—as a fixup—is obviously something of an obstacle, as it dissipates the force of any argument he might be making. However, Bragg’s writing, at its best, is so luxuriant, so rich, and so full of love that what the book lacks in focus, it makes up for in compelling atmosphere. Speaking of his time living in Florida, he says “I remember pine needles in the white sand, and watching squadrons of brown pelicans hunt for fish in the flats of Tampa Bay. Nothing is prettier, at a distance; I’ve known people that way.” Talking of hunting with coon dogs by night as a teenager: “I remember that stingy moon, remember a sliver of cold in a black sky, thin and useless.” The rhythm in his prose is palpable, the descriptors carefully chosen. At points this becomes bathetic, and his good ol’ boy tone sometimes grates in prose. On the whole, though, his greatest weapon is his prose, which passionately translates the tactile and sensate love of the South he wishes to offer as a positive alternative to older narratives.

The book is also a worthy entry into the nascent Uprooted–Ruthie Leming genre of “prodigal re-enlightenment.” Bragg does not position himself in the same way Olmstead and Dreher do, as a returning prodigal, but he is undoubtedly a cousin of theirs, at least. He lives in the South—but across the South, rarely settling for long. He was at one point most famous for showing admirable honesty in relating his participation in how national newspapers ordinarily use interns, and it is clear his value set is as much circa-2000 New York Times as Southern Living. That interplay—of the re-enchantment available to the metropolitan in the slow and bypassed, flawed but beautiful places of the world—has a vital rhetorical part to play in winning over the reading public to the defense of the local and valued. The answer to Kevin Williamson’s desire that flyover country towns might just die out (which Olmstead cites as inspiration for her defense of rural Idaho) or Hillary Clinton’s “basket of deplorables” must include the convincing of culture-formers, not their wholesale dismissal.

Bragg’s efforts are less successful in his attempt to strike a new trail in the Southern tradition. There is no doubt he is doing this; he is quite explicit about it, as we have seen. Wendell Berry’s alternative involved scant mention of the South itself, and Walker Percy was more implicit than explicit in his efforts, but Bragg wants to offer a revitalized Southern tradition. This is the red clay South, the redneck South (consider his multiple discourses on pickup trucks!), the stray dog South, the po’boy and bread pudding soufflé South. It is a South of tight-knit families and good food and hard beautiful landscapes.

The problem with this is twofold: first, who it includes and who it excludes; and second, whether what it offers is viable. Bragg rages against the cotillion South—not that there is much left of that, with Penn Warren identifying the aristocracy’s decline and cultural surrender as long ago as 1956 in Segregation—but what does he expect the remnants of the Southern aristocracy to do? Buy Toyota pickups? Similarly, there is scant mention of the black population of the South. There is no malice in this, of course—Bragg is talking about his people and places, and there is no incumbency on him to speak of any other. Yet Genovese articulated decades ago that Southern culture was a cross-class and cross-racial hybrid, and if there is any path forward for a coherent Southern identity, it surely must also be cross-class and cross-racial. (Wendell Berry put it most succinctly in “A Remarkable Man”: “there never has been a ‘white south’ or a ‘black south’.”)

As to the viability of the Southern tradition Bragg loves, it is Southern readers who must decide—but while tactile cultural goods like food traditions are valuable, total reliance upon them surely leads to a truncated culture. Bragg sounds a little like a certain sort of imperially embarrassed Englishman, emphasizing that English culture is about tea and self-deprecating humor. That is a species of defeatism.

There must be reckoning with a place’s history, but it can be more fruitfully done than it is here. Grace Olmstead is frank about the racial cruelties in her land’s past, and has a streak of pessimism in her writing, but is on the whole much more positive about what a future rural Idaho could be like than Bragg is about the South. Olmstead folds in new traditions like permacultural farming with a desire to reinvigorate the ties of local community and cross-household dependence; Bragg returns again and again to a past that cannot come again, both the good and the bad. In that sense, he truly is in the Southern tradition. But it is no recipe for a vibrant future.

Owen Edwards is a missionary and writer in the North-East of England. God has blessed him with a fine wife and two vigorous young sons, and he occupies his spare time with reading and tending to a smallholding.