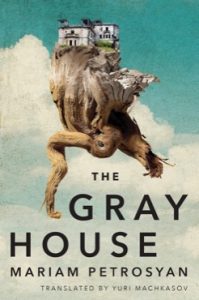 “… The House demands a reverent attitude. A sense of mystery. Respect and awe. It can accept you or not, shower you with gifts or rob you of everything you have, immerse you in a fairy tale or a nightmare. Kill you, make you old, give you wings.… It’s a powerful and fickle deity, and if there’s one thing it can’t stand, it’s being reduced to mere words. For that it exacts payment. Now, with you duly cautioned, we can continue.”

The title of Mariam Petrosyan’s The Gray House (released in Russian in 2009 and translated into English by Yuri Machkasov in 2017) suggests that it will be an institutional novel. And yet one of the unexpected brilliances of this wild, overgrown, haunted hulk of a book is that it has all the qualities we associate with the novel of childhood as well as all the qualities of a great institutional novel.

The Gray House, a nominee for the 2010 Russian Booker Prize, is about a hospital/school for disabled children. There are adults in the Gray House, counselors and nurses, but the culture of the House is created by its children. The children give one another new names. They have their own argot of Jumpers and Spiders, the Forest and the Stuffage and the Underside. They run their own coffeehouse and make their own moonshine. They cover the walls in pictures and messages whose meanings are known only to the initiated. Those who can walk lift those who use wheelchairs, and those who can lead and protect look after those who need a leader and a protector. They love one another, but also mistrust one another, vie with one another, bully one another—and, especially when graduation time draws near, kill one another.

The Gray House is immensely fun, in a bloody-minded way. Reading this book is like playing Mao, the card game where nobody can tell you the rules; it’s like being born. We learn, just as if we were newcomers to the House ourselves, what all its strange terms and customs mean. We see the collection of broken clocks, the heraldic animals painted on the ceiling, the girl Mermaid with bells braided into her enveloping hair. We piece together the story behind the terrible sadness of Daddy Vulture and his Shadow. We learn the taboos, and try to understand the fairy tales in which certain taboos may be, if not broken, at least cracked. We try hallucinogenic drinks mixed by underage barkeeps.

And now and then we find ourselves in the dreamworld of the Underside. Here we race through the Forest, low to the ground and covered in fur, our paws flashing beneath us. The Underside is umbilically linked to the House, and yet it’s also a refuge from the House’s semi-feral children. The children are terrified of what will happen to them when they graduate—when they are forced out into “the Outsides.” The Underside is a way of being outside the House without being in the Outsides. But it may be more: It may be why the House sometimes seems to be a place where time can move in more than one direction. And it may be tied to the terrible question of what happens at graduation. What could be so bad that the memories of those who have experienced it fragment into glimpses of blood and chaos?

The Gray House is a puzzle-box book, which is always a pleasure. You’ll thrill with satisfaction when you figure out the difference between Striders and Jumpers; you’ll feel mingled triumph and sorrow when you understand who the boy Grasshopper became. There are hundreds of clues, so you’ll want to take each page slowly.

But beneath the puzzles there are mysteries. The questions of The Gray House cut deep, and at unexpected angles: Do we create our traditions and beliefs as a way of managing grief, or are they unwanted, necessary gifts from some hidden power beyond us? Are all these traditions, all this wrack of culture, precious because they belong to nobody in particular, or are they trash which can and will one day be discarded?

Why is it that life is not a linear progress of education, but an endless cycle of finding ourselves thrown into worlds we don’t understand? As one of the children’s fairy tales puts it: “He found himself in the middle of the road, a place where it was impossible for him to be. Strangely, this fact did not alarm him. Also, something odd happened to his memory. He remembered nothing at all, but he knew somehow that he had ended up here of his own accord, and that it was very important for him to find something.”

At the book’s climax we learn what happens at graduation—or at least, what happened this time around. And the time- and reality-bending events of that graduation pose one final, urgent question: What would be enough to make you stay in this world and love it, if you had a chance to leave it instead?

Eve Tushnet writes from Washington, D.C. Her most recent novel is Punishment: A Love Story.