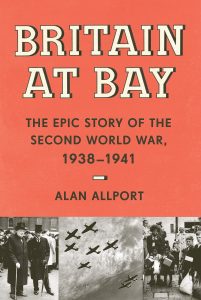 There is nothing an author fears more than that his or her book will appear shortly after one with a similar theme has been published. This is doubly the case when the first book is by a popular author with a large following. Alan Allport’s new study of the early years of World War II in British history appeared shortly after Erik Larson’s highly popular book on a similar period, The Splendid and the Vile, was published to rave reviews. This is a tragedy because Allport’s book is the finest examination of Britain’s experience on the opening phase of the Second World War since Andrew Roberts’s acclaimed biography of Winston Churchill was published a few years ago.

Allport’s study is not a revisionist one in the sense that he seeks to topple all previous work on this topic. Rather what he seeks to explain is “how a country that got so many things catastrophically wrong in the early years of the conflict managed not just to hold out against Hitler but, by the second anniversary of the war’s outbreak … to have apparently halted the rout, and even, perhaps, to be constructing a plausible theory of victory.”

Allport rejects the traditional view of appeasers versus anti-appeasers as a way of understanding the background to Britain’s approach to the war. He argues that the issue of how to react to the dictators was a complex one. Those opposed to appeasements were, as he puts it, not “a harmonious chorus denouncing appeasement with one voice.” The anti-appeasers were not unified in how to react to the rising threat from Nazi Germany and were split on how to deal with Italy’s Mussolini. In fact, some of the sharpest critics of British appeasement, including Winston Churchill, were admirers of Il Duce.

Allport tries to be fair to the much-maligned Neville Chamberlain, pointing out correctly that the movement to rearm in the 1930s, slow as it was, was largely the result of his actions. Chamberlain sought to rearm not to prepare Great Britain for another war but to “prevent another war from taking place.” Like some of the strongest proponents of rearming—Churchill, for instance—Chamberlain believed that Britain’s greatest strength would be provided by the Navy and by an expanding air force of bombers and fighters. Unlike in World War I, there was no need for Britain to raise a large army. France would provide that protection behind the Maginot Line. Allport makes an interesting point about this view. He believes that a large army was the one rearmament measure that might have deterred Hitler. “How can the English picture a modern war,” Hitler told his aids, “when they can’t even put two fully equipped divisions in the field.”

Chamberlain, Allport argues, lost much of his enthusiasm for appeasement when Hitler denounced the Munich Agreement and entered Czechoslovakia in March 1939. Although Chamberlain offered diplomatic protection to Poland and Romania as likely next targets for Hitler’s aggression, he still held out hope for another deal at least until the Nazi-Soviet Pact of August 1939. Part of Allport’s defense of Chamberlain’s policies is that Britain went to war in September 1939 with a moral clarity that was not there a year earlier at Munich.

Allport makes an interesting observation about the divergence of views of France and England over how the war should be fought. The people and governments of each nation were haunted by the memories of World War I with its huge casualties. The eventual strategy called for the best British and French forces to move north into Belgium. For France it made sense to keep the war as far away from French territory as possible, having the Germans dash themselves to pieces on the Maginot Line. The British, on the other hand, were adamant that Belgium must be protected to deny the Germans submarine and air bases that would threaten her. When the Germans attacked through the Ardennes sector, the twenty-five best British and French divisions were in Belgium and unable to stop a German breakthrough. The German victory was won in less than a week.

Regarding the eventual British withdrawal from Dunkirk, Allport argues that Hitler’s famous “halt order” of May 25th for the German army to regroup was not as important as an earlier stop order given by General Rommel when the British and French launched an unsuccessful offensive designed to cut off the German spearhead at Arras on May 21. Military historians will certainly chew over that assertion. As to the success of the British withdrawal from Dunkirk, Allport rejects the view that it was another example of the scrappy little British nation somehow muddling through. Dunkirk, he demonstrates, was an example of careful planning and professional expertise on the part of the British military, especially the navy.

In his analysis of the failure of the British and French campaign in 1940 Allport tends to engage in several what-ifs. Had the British and French not moved into Belgium, had the French responded more vigorously to the threat of the German Ardennes breakthrough, had the Germans been stopped along the Meuse, then the war would have bogged down and perhaps Hitler’s generals would have overthrown him. To many, speculations like this are not helpful as they do not shed light on what actually happened.

Allport rejects the view of John Lukacs in Five Days in London: May 1940 and David Owen’s The Cabinet’s Finest Hour: The Hidden Agenda of May 1940 and others that there was a real possibility that the Foreign Secretary, Lord Halifax, might have won over the Cabinet to open peace talks with Hitler in late May once France’s defeat was clear. He believes that there has been “far too much … made of these secret talks-about-talks” and an approach to the Germans through Mussolini or another third party was never in the cards. I believe he underestimates just how close the British came to considering such a deal. It was only when Chamberlain threw his support behind Churchill’s determination to reject any peace offers that the decision to stay in the war was reaffirmed, a point Lukacs made when he argued that the events of late May were the real “hinge of fate” of the second World War.

Allport’s discussion of the Battle of Britain is interesting. He believes that Hitler’s lack of enthusiasm for a landing in England was based on his determination to attack the Soviet Union, a decision he made in July 1940 while the air campaign over England was just beginning. The Blitz, the eight months of almost constant bombing of England from August 1940 to March 1941, failed in Allport’s view “because the Germans had no idea what they were doing … It was an enormous, amateurish, bloody waste of effort.” The Blitz he describes as England’s “Calvary during which about two-thirds of all the war’s British civilian deaths and injuries occurred.” Sometimes to be provocative, Allport can go too far. A passing observation that more Londoners died from tuberculosis and cancer than were killed in air raids in 1940–41 is hardly surprising given that the population of greater London was over seven million at the time.

Allport believes that the attention given to the role played by Ultra and Bletchley Park in blunting German submarine menace against British shipping in 1941 is overrated. The stabilizing of submarine warfare, he argues, was the result of greater use of air power to hunt down submarines and, most importantly, greater reliance on escorts. This view is one with which many military historians would concur.

While Larson’s The Splendid and the Vile’s study of the first year and half of the war focused on the quirkiness of the British people and especially its leaders, Allport sketches a portrait of what he calls the “Shire folk” at war. In a long, and in my view unnecessary, opening section, he draws a parallel with the conflict in Tolkien’s The Lord of Rings and the events of the opening stages of the war with the Shire standing for England, Rohan for France, and Gondor for Germany. Churchill he casts “as a Gandalfian seer whose warnings about the threat from Germany” were ignored until it was almost too late. Forgive the pun, but none of this “rings” true.

Still, Allport has written an important, thought-provoking study of the much-written-about period of Britain’s role in the early stages of World War II. It is well written, cleverly constructed and argued, and places the events of 1938–1941 in a new light. For anyone interested in this era of British history it is a must read.