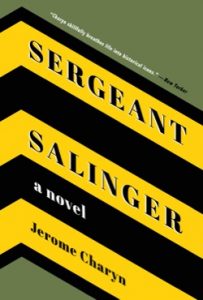 Biographical novels trouble certain readers. What is true? What is made up? Why isn’t biography enough? Why not just read Salinger, some critics ask, and forget about ancillary biographies that cannot possibly recover the innermost life or illuminate what matters most: the writer’s work. Well, why not go even further and dismiss the critics as well—a suggestion some authors might welcome who consider criticism and biography parasitical.

Biographical novels, like biopics, can make for rather dreary and factitious viewing and reading—such as any number of films about Marilyn Monroe doggedly rehearsing the main events or novels like Paula McClain’s Love and Ruin, narrated in an ersatz voice that sounds nothing like Martha Gellhorn and that has Gellhorn confessing intimacies that she would never have vouchsafed to anyone. Other biographical novels just plod along, like David Lodge’s A Man of Parts, dutifully tricked out with imagined scenes available in more tempered form in H. G. Wells biographies.

Even so, there are masters of the genre, like Joyce Carol Oates, who provides in Blonde a harrowing re-creation of Marilyn Monroe’s childhood and career, and now Connie Palmen’s Your Story, My Story, written in the powerfully aggrieved accents of Ted Hughes in an apologia that rivals the fury of Birthday Letters.

In this successful company include Jerome Charyn, who forsakes the customary reenactment of a whole life in favor of an in medias res opening in the Stork Club, commandeered by syndicated columnist and radio personality Walter Winchell and the voluptuous Oona O’Neill, the playwright’s daughter soon to marry Charlie Chaplin. The Salinger who shows up at her table is called Sonny, the scion of an oxymoronic Jewish ham merchant, already an author of slicked-up stories in The Saturday Evening Post. His ambitions are higher, but at the moment he is infatuated with the nubile Oona, “New York’s debutante,” who draws in customers and enchants Winchell as a kind of showpiece he can make part of his act.

At the Stork, Sonny meets one of his literary heroes, Ernest Hemingway, who is, however, bloated with fame and dining out on his celebrity. Sonny reveres the writer and tolerates his histrionics exacerbated by the fame Salinger would later renounce. Sonny wants to pry himself out of his posh Park Avenue upbringing and become his own man—which happens when he is drafted and serves in the CIC (Counter Intelligence Corps) in the final days of World War II.

The heart of the novel concerns Salinger’s intelligence work, ferreting out Nazi agents masquerading as Americans, detecting explosives in toilets, and making deals with unsavory black marketeers to get the civilian populace fed. He also sees action in the battle of Hürtgen Forest, where the Germans pinned down American forces in the longest single battle the American army has ever fought. Salinger was there to suffer the day after day pounding of munitions that shocked his nervous system, putting him in a mental hospital at the end of the war.

It is possible to infer from the novel some things about the sensibility of the man who created Catcher in the Rye, but Charyn wisely avoids the biographical novel’s penchant for the blow-by-blow, scene-by-scene recounting of all the important moments in the subject’s life. Instead we are immersed in the immediacy of war as Salinger has to make split-second decisions that save his life and the lives of his fellow soldiers. He has to psyche out the phonies and somehow remain true to himself, which means not becoming like the Germans who ran the concentration camps that Salinger visits and turns away from in horror.

Salinger comes out of the war as a marked man, bringing home a German wife who cannot tolerate American life in his home setting, where he can no longer make love to her. She returns to Germany, realizing their marriage cannot be repaired. He is, in short, a displaced person and the novel is about his displacement. Which, come to think of it, perhaps does lead us to the author of Catcher in the Rye. Charyn dramatizes the anomie of a man who can never quite settle down.

It is best, perhaps, to convey the Charyn touch by doing some quoting. Here is Charyn on the strangeness of Salinger’s war service, and why it permanently deracinated him:

Sonny wandered the cobblestone streets in his GI windbreaker, pecked away with two fingers on his army-issue Corona in his tower room, or else sat at the Blue Mermaid. The Limeys didn’t like him any better than the general staff’s own intelligence team. Members of the CIC were like the Comanche of the Fourth Division—outcasts and intruders they didn’t quite understand. Sonny and his fellow agents served as scouts in Tiverton, ever watchful. He had the authority to arrest a general. He also had the best digs in town.

The best digs? Sonny might as well be back on Park Avenue with his parents. What does it do to a man to have to be “ever watchful.” Is there any doubt now about why Salinger wanted no part of becoming papa to a generation and had to withdraw from public attention after his privileged witness to human depravity? After reading Charyn, you might conclude that Salinger may be the loneliest man in American literature.

A T. S. Eliot line from “Gerontion” comes to mind: “After such knowledge, what forgiveness?”

His regiment touted him as an author published in The Saturday Evening Post, but he didn’t have a single friend. His superiors knew how valuable Sonny would be once the invasion force landed. Sonny could speak with the locals. Soldiers of the CIC would be the first to enter a captured French village. They would root out collaborators, chat with the mayor and chief of police, determine who could be relied on and who had to be shot. They would find quarters for the general staff and for themselves. But their methods remained a mystery. And that’s why they were so mistrusted.

Coming out of the war Charyn’s Salinger is blocked. He cannot write. But we know he does resume his writing—somewhere, somehow, outside the bounds of this novel. But he will remain Sergeant Salinger, forever alone with a knowledge he will try to impart to the prying world while at the same time keeping that world at bay.

Carl Rollyson’s most recent biographies are The Last Days of Sylvia Plath and The Life of William Faulkner.