Americanism and the ‘Roman’ Catholic 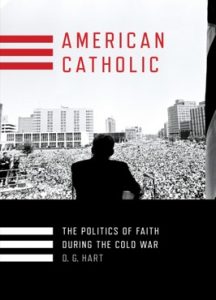 In 1864, Pope Pius IX issued Syllabus Errorum, outlining heresies opposed to Catholic Church teaching. One error was the American separation of church and state, which had drawn the attention of continental conservative clerics. A few decades later, a biography of American priest Father Isaac Hecker made it clear that Hecker and the Paulist Brothers had been reaching out to American Protestants, an early form of ecumenicism, and that Hecker had used such terms as “natural virtue,” which was interpreted as classical liberalism. The Vatican was opposed, and what was understood as Americanism gained no approval.

The issue is still with us, if a pastoral letter from our local priest is proof; he recently argued to his parishioners that they are Catholics first and Americans second, which presumes an external authority apart from America’s founding documents and an unequivocal argument for self-government under law. His point? The teaching of the church is presumed a powerful corrective against Americanism, which is a clear and present danger to the Catholic faith.

Context will be helpful here. On March 5, 1946, Winston Churchill stressed the need for the United States and Britain to act as guardians against the Soviet Union. The metaphor Churchill coined was that an “iron curtain [had] descended across the continent.” His talk at Westminster College acknowledged that the United States was at a pinnacle of world power that would require policing the expansionist policies of Stalin.

What followed was an American-vilified depiction of Communism compared to a moral justification of Americanism at war with the Red Scare. America’s role is well recognized but, as Professor Hart makes clear, what is less so is the religious and political role of American Catholic intellectuals, a coalition of anti-Communists, traditionalists, and classical liberals. The problem they faced was not only church-state relations but how to reconcile the American form of government and the dynamics of modern society, anathema to the Roman Catholic Church since the First Vatican Council.

Professor Hart’s story traces how “Roman Catholics became such prominent players in conservative circles” and, as he writes, allows the reader to “understand the affinity and tension between national and Roman Catholic tradition and ideals.” More striking is “the way [American] Roman Catholics” defended “the United States’ founding, history, and influence.” It is the history of how Americanism created a space for itself within the “Roman” Catholic tradition.

What had been certain for European clerics was less so for American clerics. Notably among the latter was the Jesuit John Courtney Murray, whose major concerns were church and state and religious freedom issues that contradicted Rome’s authoritarianism. Murray’s arguments centered on the manner in which America’s founding documents were compatible with Catholic doctrine. Professor Hart is prescient in stating Murray’s position: “[A] separation of church and state was beneficial when government recognized that religion was the responsibility of the church and government guaranteed freedoms that allowed the church to fulfill its task.” The Vatican indicated displeasure. But what was emerging was an American church increasingly independent from Rome’s hierarchy—“emancipated” Catholics.

The pre-Vatican II watershed moment in Professor Hart’s story is the 1960 election of John F. Kennedy when Roman Catholicism entered the mainstream of American life and laid to rest the question of whether Catholics could be full participants in American society.

The paradox that emerged, however, was between the old temporal and spiritual realms. The question facing the American voting populace was whether Roman Catholics, with Kennedy’s election, now had space to support the nation in its defense of liberty and its fight against communist tyranny. On the other hand, would the newly elected president be obliged to defend separation of church and state and the Constitution, or be guided by the Vatican, which would suggest that Roman Catholicism would be the established religion and thus under pressure from an ecclesiastical hierarchy? The question became largely moot because, as Father Richard John Neuhaus explained, Kennedy “was not much of a Catholic.”

Murray had been incautious, but with the arrival of Vatican II the charismatic William F. Buckley Jr. plotted a magazine that would animate Christianity and anti-communism and host a coterie of rising Catholic conservatives. What emerged was the National Review and in many respects it was updating “Christianity [with] a distinctly American flavor.… The Americanness of Buckley’s Roman Catholic traditionalism became particularly noticeable during the papacy of John XXIII” and following with Pope John Paul II.

It was Garry Wills, however, whose book Politics and Catholic Freedom set the stage for a debate on encyclicals and the “age-old issue that American Roman Catholics had faced since the Americanist controversy: To what degree were church members obligated to adhere to papal teaching?” Were encyclicals infallible? Wills argued that such could not be the case, since papal insights had to be limited and based upon historical circumstances.

The decades from the 1950s forward became, then, the times for other conservatives who saw no tension between American politics and Roman Catholic faith. When the United States bishops arrived for the Second Vatican Council, they were prepared to offer reforms effected in American Catholicism by the election of Kennedy. The reforms were in Latin but the bishops said that they had consulted their lay people or that they knew what the faithful thought.

Professor Hart follows this historical event by noting that as a consequence antagonisms did emerge within the American church’s “left” and “right.” The Catholic advisers were numerous and included Father Neuhaus, George Weigel, Michael Novak, and Brent Bozell, to mention four.

The issue, however, was a delicate one; it aimed for Roman Catholic assimilation with American political norms, which simply meant that no Roman Catholic “citizen” in the United States would be obliged to return to an “understanding of the faith that pitted ancient and hierarchical Rome against modern and republican American Washington, D.C.”

Father Neuhaus’s claims for a Catholic Moment deserve some comment here. The great temptation during the 1960s was liberation theology, which Neuhaus argued merged religion and society into what he terms “monism.” Neuhaus turned to the silenced Murray for an alternative that distinguished between the religious and political spheres, which he called “pluralism” and which would prevent a synthesis between Marxism and Christianity. Neuhaus further argued that aside from Pope Leo XIII’s condemnation, American Roman Catholics had always veered between “progressives who gave priority to being true Americans” and conservatives who sided with being “good Catholics.”

Whether the American “Catholic Moment” has been fleeting or not, Professor Hart does wisely conclude that it gave American Catholics the “freedom to vote for their preferred candidate,” which suggests freedom of conscience as opposed to docility.

Whether Americanism is still a heresy is a crucial question, especially for those who do not relish a Vatican II rapprochement with modernity and whose critical outlook is that Vatican officials who know their church history are obliged to object to modern history’s moral positions.

Liturgical reform might be one thing, but the Church’s living “Magisterium” to both Sacred Scripture and the supreme authority of the Pontiff and bishops to teach and to guard divine Revelation is another. Dust-ups and tantrums are likely to continue, along with fleetingly fancy footwork.