Appropriating the Goods of Reactionary Conservatism 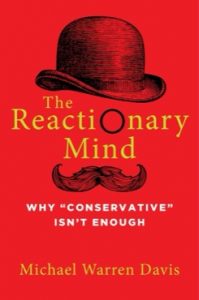 There’s a common interaction my wife and I have with people when we are out with our four young children. The stranger will gaze upon our reasonably well-behaved kids, shake his or her head, and declare in a voice of admiration and amazement: “I don’t know how you do it.” I’m often tempted to respond: “Well, we do the kinds of things parents did seventy years ago.”

I would choose seventy years as my marker, because at that time, only about 20 percent of American homes contained a TV set (our house has no cable, and though we have a television, it is collecting dust in our basement). Though now about a quarter of Americans don’t read books, in 1951 about 50 percent of Americans had read more than ten (we typically max out our public library cards with children’s books, and our own personal library is like kudzu). And in 1951 most families ate dinner together every night, while only about 30 percent do today (we manage to dine together most weekday evenings, and almost always on weekends).

My goal here is not to present 1951 as some sort of halcyon period in American life (it wasn’t), but rather to point out that some traditions should never go out of style for the sake of innovation. Today, Americans of all classes are slaves to their technology, be it their computers, smartphones, or television sets. Middle- and upper-class adults are beholden to tight schedules of work, exercise, and an endless cycle of extracurricular events. They parent the same way, giving their kids unfettered access to technological devices, sending them to often soul-crushing public schools that can’t recognize differences between boys and girls, and carting them around to so many after-school activities that their kids have little time for play or imagination.

Michael Warren Davis, author of The Reactionary Mind: Why “Conservative” Isn’t Enough, understands this. He notes that despite all of our paeans to freedom and independence, we have become “prisoners of our own convenience.” He decries how “all of our relationships have become shallower, more transactional.” And he bemoans how we have become entirely dependent on corporations and the federal government to provide for our needs, from our food and clothing to our healthcare and education. This is not the republic the Founders envisioned.

However, unlike my desire to return (or progress) to a time without Amazon, Apple, and BlackRock, the restorative vision of The Reactionary Mind looks to a more ancient pedigree. Davis argues that we should consider the life of the medieval peasant, who lived a simpler but more fruitful life that was freer of the meaningless choices of modern consumerism, and wiser in regards to surviving and thriving in the world. There is certainly much truth to this: though modern man enjoys unimaginable comforts in comparison to his ancestors, he is not necessarily happier or even smarter, exemplified in the many forms of addictions that now oppress him, and his inability to solve many of the problems he encounters over the course of his life.

Moreover, as Davis observes, the medieval era was more socially, intellectually, and religiously coherent, enveloped by the rituals, beliefs, and culture of the Catholic Church. In our post-Enlightenment world, political and cultural liberalism has undermined that uniformity, and the new ideologies that have replaced Catholicism are driven by materialist, utilitarian, and sensualist conceptions of the good that have left us disoriented, displaced, and dissatisfied. Not only that, but these ideologies, though often birthed under the guise of “tolerance” and “liberty,” inevitably manifest an explicitly anti-Christian worldview that seeks to coerce everyone to play along. Consider, for example, the intensity with which globalist technocrats seek to compel not only their own citizens but nations around the world to embrace the sexual revolution (feminism, contraception, abortion, LGBTQ+).

Davis’s antidotes to the mania of modernism are provocative, clever, and even amusing. He declares that “it is imperative that we get women out of the workforce,” because the kind of work they do “is antithetical to family life.” This is both because careerism makes women choose between their job and their children (if they have any) and because male breadwinners have to compete with female coworkers for positions and salaries. Moreover, not only must women depart from the workforce, but America requires a family wage, and should bring back jobs that were transferred overseas.

Journalism, like female careerism, must also be trashed, because it manipulates and benights the public. “The whole premise of journalism in the United States is that a cabal of semi-literate alcoholics can arm the public with all the information to make government run efficiently.… It’s all a huge scam. No journalist has any idea what’s going on.” Davis harbors similar disdain for the digital age exemplified in things like smartphones and social media, which he labels “banal” and even “hell.” Strong words, but is he wrong? Twitter has done nothing good for public discourse, and the iPhone is nothing less than a red-light district in your pocket.

For Davis, we should exchange female empowerment, journalism, and the digital age for the kinds of things that made the medieval era such a glorious age. We should have lots of kids and homeschool them, stay in our communities but “stay away from cities,” avoid careerism, grow our own food, build our own furniture, minimize technology, delete our social media accounts, shop local, own dogs, and dutifully practice a religious faith. Davis’s vision is enhanced by six appendices, including recommended pastimes, books, and even dogs.

A lot of this is good advice (though the author’s antipathy for ball sports seems unnecessary), but it is impractical for many, if not most people. Eighty-three percent of Americans today live in urban areas, and are deeply dependent on both the digital and global economies, both for their paycheck and their basic needs. Many women work not because they necessarily want to, but because they are single and poor. Shopping locally is expensive, as is owning pets. We all are constantly making decisions about how to balance our budgets and our schedules, which makes major renovations to our daily lives quite difficult. In order to live in my native Northern Virginia with my wife and four kids, I have two jobs and work more than sixty hours per week. I don’t have time to build furniture, nor would I want to if I had the time.

Moreover, I think Davis’s description of medieval Europe falls into the same trap as those who long for the days of Leave It to Beaver. He writes: “Except to the most debased hedonist, the most ardent skeptic, and the most ambitious oligarch, the Middle Ages must sound like a dream.” Yes, I too would like to live in a simpler time, in which I could take pride in the work of my own hands as a farmer or tradesman, within a realm that explicitly endorsed the Catholic religion, and in which the rhythms of daily life were built around family, faith, and community.

I am also grateful the mother of my four children is still alive, as are all of our children, and that when we have a health problem, there is affordable medical treatment. Several years ago, I felt an intense pain in my stomach during a hunting trip that did not abate even after a week of resting and reduced diet—it turned out I had a ruptured appendix which required immediate surgery. If I had lived in 1300, I would have been dead. I am also grateful for indoor plumbing, the ability to read (unlike my medieval peasant ancestors), and the fact that armies of some nobleman or king are not regularly traipsing through my land and confiscating my property.

So while I entirely appreciate Davis’s desire for the most admirable qualities of medieval Christendom, ones I admittedly yearn to apply both to my own family and to my little community—let’s put things in proper perspective. Yes, the modern, materialist bourgeois lifestyle sold to us as a utopian dream is an empty charade. But we can appropriate modern technology and culture and do good with them, evidenced by the fact that people across the world are reading this article. And though now I see few movies, I am very grateful for Jesus of Nazareth, Master and Commander, and almost every Kenneth Branagh adaptation of Shakespeare.

Perhaps then the most salient lesson from Davis’s readable (and entertaining) reactionary treatise is that we, like our forebears, must determine what of premodern and postmodern society is authentically good, true, and beautiful and contributory to human flourishing, and what is not. Indeed, Davis himself does this in his very enjoyable fourth appendix on “reactionary drinks,” most of which did not exist a couple hundred years ago. Indeed, cozying up with your favorite cocktail (mine, the Old Fashioned, is bewilderingly omitted) and letting Davis suggest to you the path to a more authentic (and happy) conservative life would be an evening well spent.