Back to the Pro-Life Future 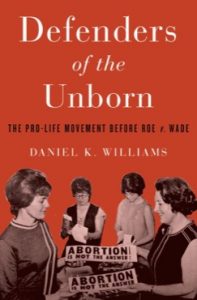 “Before you know it,” commented NARAL president Lee Gilding in 1973, days after the Supreme Court discovered a constitutional right to abortion in the 14th Amendment’s penumbras, “this will be past history and abortion will be just another medical procedure. People will forget about the whole thing.”

Forty-nine years later, not a day has passed without the legality and morality of abortion, the centerpiece of the culture wars, being hotly debated across the United States. Since that fateful day of January 22, abortion opponents, who in the late 1960s chose the label of “pro-life,” have worked tirelessly, first, to render mute, and, later, to overturn Roe v. Wade. And that day may well be nigh, with the Supreme Court’s ruling on a direct challenge to Roe’s legitimacy, Dobbs v. Jackson Women’s Health Organization, expected in June. One thing is certain: whatever the Court decides, neither pro-lifers nor pro-choicers will forget about the whole thing anytime soon.

Overturning Roe, which currently allows legal abortion for any reason and at any point in a pregnancy, would transform the abortion landscape in America to a situation that very few pro-lifers remember: abortion’s legality would be decided by state legislatures on a local basis. Before the Supreme Court indefinitely snatched abortion from political debate, grassroots movements, legislative lobbies, and information campaigns marked the calculated approaches of both sides.

With the return of this pre-Roe situation a real possibility, Daniel K. Williams’s meticulously researched and soberly written Defenders of the Unborn provides invaluable insights into how pro-lifers fought the rising tide of abortion in the years leading to 1973. The motives, emphases, and coalitions of those early years, Williams argues, will surprise both sides of today’s abortion debate. They also run counter to the standard histories narrated by abortion supporters, which, before Williams’s book, were the only ones on the market. In bringing the lessons of the past into the present, pro-lifers have a vital weapon for fighting the battles of the future.

Williams begins his narrative in the 1930s, when birth control campaigns triggered the first discussions about liberalizing laws prohibiting abortion, which, at that point, was illegal in every state in America. These debates were wholly intramural between doctors, and they were “a religious conflict.” On one side were Catholic doctors who “believed that they were defending the absolute values of natural law against moral relativism and utilitarian arguments that sought to justify ‘killing’ for the sake of a higher social good.” On the other side were secular Jewish doctors who “claimed that legalizing abortion would produce fewer social evils than the prohibitions on abortion had already caused.” As the poverty of the Great Depression spread, married women, terrified of having to feed another child, were seeking illegal abortions, and some were dying as a result. Dr. Frederick Taussig, a leading advocate for abortion liberalization at this time, used these deaths to promote “a higher social good” of “preventing the further impoverishment of a family … or saving the health of a pregnant woman.” Protestants, meanwhile, “who made up the vast majority of the medical profession, occupied the middle ground.”

It was not until 1959 that this debate spilled into the legal and then political spheres. The American Law Institute (ALI) was the first to propose legalizing abortion for three reasons: rape, women’s health, and fetal deformity. Unlimited access to abortion had not occurred to anyone at this point. ALI’s proposal was gradually taken up by legislators, first in California, and it was met with fierce opposition by the Catholic Church. As more states took up this debate, the Church learned quickly, especially in states where there were few Catholics, that it needed not only to form inter-religious coalitions, but it also needed lay leaders and a less religious-sounding argument. California lawyer Walter Trinkaus “took Catholics’ legal arguments out of the realm of natural law and into the arena of constitutional law.” From this point forward, pro-lifers would argue that the fetus is a human person, and therefore deserving of the law’s full protection.

Williams details the pro-lifers’ victories and defeats in multiple states over the 1960s. A consistent set of factors contributed to dealing victory or defeat: lay leadership and organization, grassroots support, information campaigns that appealed to the head and the heart (including graphic photos of aborted babies), strong public support from clergy, public pressure on legislators, robust efforts to elect pro-life representatives, and the stance of a state’s governor. As the decade progressed, Williams emphasizes that the pro-life movement “found common cause with political progressives”—civil rights, social welfare, and anti-war were all viewed as life-affirming perspectives. Richard John Neuhaus, then a progressive Lutheran minister, made this clear: “The anti-abortion forces are not instruments of political and social conservatism.” Running for the presidency in 1964, Arizona Senator Barry Goldwater confirmed Neuhaus’s sentiment: he supported abortion on libertarian grounds while his wife worked as a Planned Parenthood volunteer.

As the Sexual Revolution took hold of America in the mid-1960s, abortion was conceived as a “right” for the first time. In 1965, after the Supreme Court case Griswold v. Connecticut, abortion activists hurried to include abortion under the newly declared right to privacy. In 1967, the National Organization for Women (NOW) called for a repeal of all abortion restrictions; the ACLU followed suit two years later. Abortion was now debated as a woman’s issue, with each side arguing that it was defending true femininity. Public opinion was shifting in favor of legalizing at least some abortions. Most politicians, at this point, were slow to take sides. Before Roe, more Democrats than Republicans were likely to call themselves pro-life. In 1970, the nation’s most permissive abortion law was passed in New York thanks to the support of Republican Governor Nelson Rockefeller.

The legal battle over abortion moved to the courts. As late as 1967, the state supreme court of New Jersey ruled, as other states had done in prior years, that fetal life was owed legal protection. By 1972, however, state courts began striking down restrictions on abortion. The 1972 presidential contest exposed a new, gradually developing problem for pro-life movement: the New Deal liberalism that so many pro-lifers supported was morphing into a rights-based liberalism that pro-choicers had claimed as their own. Still, pro-lifers “continued to think of themselves as human rights activists, not social conservatives.”

Roe v. Wade, a bombshell whose scope neither side foresaw, catalyzed change for the pro-life movement. Roe ended the abortion debates taking place in statehouses nationwide by creating a legal guarantee for abortion on demand. After detailing both sides’ arguments in the case, Williams describes how pro-lifers quickly defined a new goal: passing a Human Life Amendment (HLA) that would override Roe by declaring the fetus a person deserving legal protection. In refusing to accept lesser compromises, such as a states’ right amendment that would turn back the clock to pre-Roe legal status, support for the HLA “effectively redefined the movement and alienated some liberal supporters.”

Roe also initiated a split within the Democratic Party between pro-lifers and pro-choicers; the latter cast their lots with outspoken feminist groups that supported abortion. This split prompted an overlooked piece of history: in 1976 Ellen McCormack of New York became the first woman presidential candidate to qualify for federal financing, and she did so as a Democrat campaigning on the single issue support for the HLA. Meanwhile, California Governor Ronald Reagan’s two bids for the presidency in 1976 and 1980, with his support for the HLA, coupled with the Democratic Party’s endorsement of Roe in 1980, sparked a new alliance between pro-lifers and the Republican Party.

Williams’s extended epilogue brings the pro-life movement’s story to the present day. He is frank in his assessment: “The simultaneous success and failure of the pro-life movement was a result of the movement’s defiance of conventional political categories and its concomitant embrace and rejection of late twentieth-century American liberal values.” He points out the irony of pro-lifers’ embrace of social conservatism, which was the position it left in the 1940s in favor of the human rights approach. But in reality “the fight against abortion remained both a campaign for human rights and a battle against the sexual revolution.”

For the pro-life fight that is ahead, the lessons learned from successful and unsuccessful state-level battles a half-century ago will prove essential to navigating the legal landscape should Roe be overturned. Yet in identifying the heartbeat of the pro-life movement, Williams is right to insist that the human rights angle remains its center and enduring appeal, especially in winning the hearts of the young, as it has done so well.

Each January, hundreds of thousands of Americans, the majority in high school and college, descend on Washington, D.C., for the annual March for Life in protest of Roe. The most ubiquitous sign carried for the walk down Constitution Avenue reads, “I am the Pro-Life Generation.” This generation of young people, thanks to Williams’s book, can learn much from their predecessors in the movement. Armed with that knowledge and inspired by their forebears’ courage, young pro-lifers are ready and eager to write the next chapter, one that they pray will be the last, should they secure the legal right to life for the most vulnerable among us: those waiting to be born.

David G. Bonagura, Jr. is the author of Steadfast in Faith and Staying with the Catholic Church.