Beyond Black and White 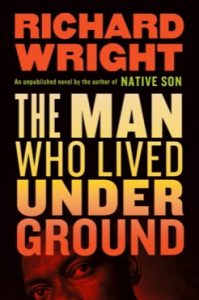 Richard Wright’s most recently published novel is a cause célèbre. The Man Who Lived Underground, originally written in 1941, was rejected by his publisher at the time. Excerpts were subsequently published in a few places, including the posthumously published short story collection Eight Men. Thanks to the Library of America, we now have the complete novel.

The story: Fred Daniels is a black servant picked up by the police as a suspect in a murder he did not commit. Brought to the police station, Daniels is brutally tortured in order to solicit a confession. He escapes from police custody and goes into the sewers, where he lurks for a few days, observing what is going on aboveground. He eventually returns to the surface where he is killed by the police.

That at least is the gist of the plot summary provided in most of the reviews of the novel. “Eighty Years Later, Richard Wright’s Lost Novel About Police Brutality Speaks Across Decades” (Esquire); “Richard Wright’s newly uncut novel offers a timely depiction of police brutality” (LA Times); “Richard Wright’s novel of police brutality: The most relevant book of 2021 was written 80 years ago” (Chicago Tribune): these are some of the headlines. Innumerable reviews noted that the publisher did not provide a reason for not publishing the book, but (wink, wink) it is obvious that a publisher in the 1940s could not handle a manuscript painting the police in an unflattering light.

That narrative is a bit odd, however. Police brutality and corruption were a staple of crime fiction in those days. A decade before Wright’s novel, Dashiell Hammett wrote Red Harvest, in which the police are so brutal and corrupt that the hero explains that the governor will need to suspend the entire police force. A decade after Wright’s novel, Raymond Chandler describes a police officer in The Long Goodbye as “the kind that solves crimes with the bright light, the soft sap, the kick to the kidneys, the knee to the groin, the fist to the solar plexus, and the night stick to the base of the spine.” In between Hammett’s first novel and Chandler’s last novel, corrupt and brutal police are a veritable trope in the hard-boiled detective and noir novels Wright was clearly imitating. While a sensitive reader might well object to the scenes of violence in Wright’s manuscript, it is hard to imagine a publisher rejecting it because it reads too much like the grimy popular noir novels of the day.

Moreover, arguing that this is a story of racially motivated police brutality is a misreading. If this is a story about how the police just want to frame a black man for a crime, then how to explain the fact that the police seem perfectly content when they caught the actual murderer, because, after all, “he was an Eyetalian”? Even more crucially, what scares the police at the end of the story is that Daniels saw them brutally beating an innocent night watchman to get a confession; the night watchman was white. The corrupt police officers in this novel are equal opportunity abusers.

There is a much more obvious explanation for why the publisher would have rejected the novel. It is simply not at all what the publisher was hoping to get from Richard Wright after the huge success of Native Son. Instead of something in the same vein, Wright sent in a novel that starts out as a fairly routine bit of noir fiction and then suddenly morphs into a wild existential fantasy of a guy going insane in the sewers. This part, elided in many of the reviews, turns out to be the main body of the book, the part that was previously published. It is an existential nightmare; the closest literary parallel is Sartre’s Nausea.

It is not hard to imagine a publisher concerned about negative reviews of this book from people expecting another Native Son. You can also then easily imagine everyone’s relief when, after The Man Who Lived Underground was rejected, Wright wrote Black Boy, which was exactly what everyone wanted to read. Why is The Man Who Lived Underground so different than anything Wright had previously written? It was Wright’s attempt to break free from the sort of stories he had been writing. As he told his friend and agent (who also did not like the novel), “It is the first time I’ve really tried to step beyond the straight black-white stuff.”

The plot was born after Wright read in True Detective about a man living in the sewers robbing people. The police brutality is tacked on to the outset of the story to give a reason for Daniels to be living underground. But, that early part of the story was never all that important to what Wright was trying to say. Indeed, if the recent reviews are an indication, the early part of the book is a massive distraction.

If the middle of the novel is the heart of the story, what is the message? Again, the recent reviewers wanting to frame the novel as a statement of race obviously didn’t bother to read the whole book. After the story is the essay “Memories of my Grandmother,” which Wright wanted published with the novel to explain the theme. In the second paragraph of that essay: “The whole idea is centered around the ardent and volatile religious disposition of my grandmother …”

Looking back at the story, this is indeed the obvious theme. Shortly after Daniels goes into the sewer, he discovers a crack in the wall and watches a church congregation singing. “Then he wanted to leap through the quarter inch of crack, straight into the midst of those foolish people and gather all of them about him, telling them: ‘Don’t do this to yourselves!’” Daniels has discovered that religion is simply a form of subservience born of guilt. Over the ensuing pages, we watch Daniels work out the implications of that thought. Our need to feel guilty runs deep in our souls, deeper than any actions that we commit. Watching the police torture the innocent watchman for the crime Daniels himself committed, Daniels feels no pity, “no, he felt that this was somehow a good thing; it would awaken the watchman from the long sleep of death, would let him see … more of the hidden landscape than he would ever see in any other way.”

Having finally come to understand the nature of the world without God, Daniels emerges from the underground, like the person coming out from Plato’s cave or back from the grave, in order to explain “the foundations of life here in the underground, that emotion that told him that, though he were innocent, he was guilty; though blameless, he was accused; though living, he must die; though possessing faculties of dignity, he must live a life of shame; though existing in a seemingly reasonable world, he must die a certainly reasonless death.” He goes straight to the police station to confess his inchoate guilt, only to discover that nobody understands what he is trying to say. The police return him to his underground lair and shoot him because “You’ve got to shoot his kind. They would wreck things.”

The Man Who Lived Underground is an interesting reflection on Nietzschean themes of guilt of God. It is not a pretty picture. Because Wright has a superlative gift for prose, the novel is a thoughtful companion for an evening. Because the story is deep, it bears a second reading. However, if you go in expecting anything even remotely resembling the genius of Native Son or the harsh realities of Black Boy, you will be thoroughly disappointed. The story Wright wrote is indeed, as he described it, “beyond stories in black and white.”

Its publication now, however, provides a marvelous lens by which to look at the state of American discourse about race. Here we have an existentialist nightmare about a man working out the implications of guilt in the face of a godless world, and reviewer after reviewer picks up the book and sees it only as a story about police brutality.

The reviewers see only their own prejudices reflected in a mirror. It is one of the sad features of the modern obsession with race. If everything in history and everything in literature and everything in politics is merely a reflection of identity politics and race, then it becomes impossible to see anything else. The tragedy is that one of the foremost novelists of the twentieth century, a man who wrote Great Books, is reduced to someone who merely confirms the prejudices of his readers. Can we free Richard Wright from the shackles of being seen purely as a Black Author? When can we look past the “straight black-white stuff” and realize he was simply a Great Author?

James E. Hartley is Professor of Economics at Mount Holyoke College. You can follow him at jamesehartley.com.