Books in Little: A Political Theodicy 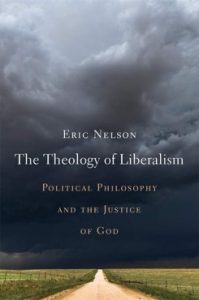 The Theology of Liberalism: Political Philosophy and the Justice of God
By Eric Nelson.
Harvard University Press, 2019.
Hardback, 232 pages, $31.

It would be unfair to say that Eric Nelson’s The Theology of Liberalism is incoherent; it is better to say that Nelson offers at least three separate studies and each part could be read apart from the others without much detriment to the reader. It would also be wrong to argue, as some reviewers have, that Nelson offers us the “theological origins of liberalism,” unless one defines “theology” as a natural theology that Nelson contrasts with a more traditional Augustinian theology.

Nelson’s broader argument, one that cannot be made often enough, is that political thinking owes something to theology. But whether he means that political theory simply intersects with theology, or is at root theological—what Russell Kirk argued—is hard to discern. It seems to be the former rather than the latter insofar as Nelson demurs from a robust theological critique of liberalism. At least he is prepared to argue that insofar as liberalism engages with traditional theological concerns as if theology were not precedent or even essential to politics, it a) becomes an ersatz theology itself and b) leaves itself vulnerable to arguments used in theological debates.

Nelson argues that John Rawls’s famous ideas of justice constitute a theodicy, and must be subjected to all the arguments concerning theodicies. That argument makes up the substance of his book in Chapters 4 and 5. One bookend for these chapters, Chapter 3, traces through Rawls’s undergraduate thesis the potential origins of his arguments, including Marx. Chapter 6 subjects liberalism and libertarianism, right and left, to insights gained from theodicy and theology.

Nelson’s preface to this study of Rawls, Chapters 1 and 2, will prove frustrating if read as essential for the rest of the book. His summary of the opinions of Kant or Locke, for example, hardly rise to the level of defining the origins of liberalism as theological. If anything, he only demonstrates what most folks would already know: founding “liberals” such as Locke or Kant rejected traditional Augustinian anthropology. For whatever reason, Nelson goes deep into the weeds of sixteenth- and seventeenth-century Reformed Protestant theology in Chapter 2, particularly the justice or injustice of the assignment of Original Sin. This second chapter, published in 2018 as a journal article, really doesn’t belong in the book apart from (Nelson hopes) shoring up the assertion that theodicy and theology are wellsprings for political thought. Apart from getting deep into theological minutiae here, including some interesting insights concerning royalists and Hobbes in particular, this chapter could have been omitted entirely.

There are some fine young scholars reappraising the role of theology in political thought, and Nelson is certainly one of them. He is right to critique Rawls’s political philosophy as a theodicy. But in our post-liberal moment, one hopes for more than the kind of tentative criticism offered here. Secularism has had its day, and the existential and foundational concerns of religion are reasserting themselves more in political life.

Glenn Moots is professor at Northwood University and author of Politics Reformed: The Anglo-American Legacy of Covenant Theology and co-editor of Justifying Revolution: Law, Virtue, and Violence in the American War of Independence.