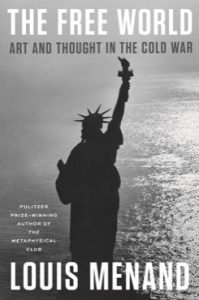 Let us dispose of the superlatives first: In terms of both style and substance, The Free World represents an achievement of the very highest order. A professor of English at Harvard who moonlights as a staff writer with the New Yorker, Louis Menand offers readers the best of both worlds. He writes with erudition and eloquence, insight and irony, punctuating the result with sharp observations and flashes of wit. “Many teenage boys wanted to be Elvis Presley,” Menand observes; “millions of teenage girls wanted to touch him. The latter helps to explain the former.” Indeed it did.

Were our own world genuinely free and also just, Menand’s book would win a bushel full of prizes. I hope it does. Given the world as it actually exists, however, it is likely to attract no more than a limited readership. Weighty in every sense of the word, The Free World is almost defiantly at odds with the fashions and predilections of the so-called Digital Age. Those accustomed to informing themselves by nervously poking through clickbait are unlikely to have the patience to read and absorb 700-plus pages of text supplemented by hundreds of detailed and instructive footnotes. But the loss will be theirs.

An amalgam of intellectual and cultural history, Menand’s account spans the period from roughly the mid-1930s until the mid-1960s. In that sense, the reference to the Cold War in the book’s subtitle is misleading. Free World begins in the decade that precedes the Cold War and concludes as the Vietnam War is beginning, with the Cold War itself destined to continue for another quarter-century.

That said, Menand’s interest centers in particular on what we might call the Cold War’s seminal years—the late 1940s through the decade of the 1950s. This was a period, he asserts, when “Ideas mattered. Painting mattered. Movies mattered. Poetry mattered.” It was a moment when “people” believed in liberty “and thought it really meant something.” With equal conviction, according to Menand, people also believed in authenticity and democracy, and “in the common humanity of everyone on the planet.”

Who were these “people” to whom Menand refers? Bluntly, not everyone and not just anyone. Like one of those Technicolor epics of yore that offered at least a walk-on part to every sentient Hollywood star, former star, or quasi-star, The Free World features an enormous cast of characters. I could use up my allowed quota of space just naming names: Kennan, Orwell, Eliot, Trilling, Mills, Mailer, Sartre, de Bouvier, Baldwin, Ellison, Wright (Richard not Frank Lloyd), Berlin (Isaiah, not Irving), Ginsberg, Kerouac, Cage, Rauschenberg, Cunningham, Johns, Warhol, Truffaut, De Man, Derrida, Friedan, Kael, Sontag, and so on, until Menand lets Tom Hayden and Mario Savio have the last word in a concluding chapter, appropriately titled “This Is the End.” All in all, it makes for a dizzying array of artists, thinkers, and cultural insurgents that Menand himself classifies as “headliners.”

True, the headliners are mostly white males, but Menand includes a sufficient number of women and people of color, not to mention gays, to avoid attracting the attention of the diversity police. That said, apart from space carved out for Bob Dylan, the Beatles, the Rolling Stones, and the young Elvis (“shy and deferential and devoted to this parents”), Menand’s protagonists hold this in common: They inhabit a rarified universe, accessible only to a select few. His Free World is the province of elites.

Creative types laboring in Chicagoland where I grew up or other precincts in flyover country don’t qualify for even passing recognition. Much the same applies to their counterparts in Rome and Berlin, Toronto and Sydney: Geopolitically, each of these ranked as a Free World metropolis, if not quite in the top tier, just below; Menand consigns them to the status of outposts devoid of artistic and intellectual merit. Manhattan is where the action is.

Menand’s working conception of “art and thought” likewise has similarly identifiable boundaries. It is resolutely secular, for example. In Menand’s Free World, no religious figure qualifies for notice, with Martin Luther King the sole exception and even then, not as a preacher but as a civil rights leader. During the Cold War’s formative stages, religious writers, thinkers, and activists such as Reinhold Niebuhr, Will Herberg, C. S. Lewis, Thomas Merton, and Dorothy Day figured prominently in Western intellectual life. Take your cues from Menand’s account, however, and you’d never guess that the Cold War unfolded in a faith-saturated environment.

As to whether ideas, painting, movies, and poetry functioned as venues within which contemporary artists and intellectuals expressed their commitment to liberty, authenticity, and democracy, mark me down as skeptical. To emphasize: Menand’s story is never less than interesting. It is unfailingly smart. In its frequently revealing biographical sketches, it can be altogether entertaining. In my reading, however, The Free World’s overarching theme is the Western intelligentsia’s response to crushing artistic and moral exhaustion.

After World War II, Western culture had reached a dead end. Totalitarianism and genocide, along with the omnipresent possibility of all-out nuclear war—all of this coming hard on the heels of the shattering experience of 1914–1918—had utterly discredited the narrative of history as a forward march toward progress, with Europeans and Americans leading the way while presiding over dark-skinned inferiors.

So read from one point of view, The Free World narrates efforts to reconstitute Western culture. After 1945, this necessarily implied liberating it from the bonds of thoroughly debased and discredited traditions. The core idea was not to build on a cultural inheritance, but to supplant it.

That the United States was now superseding (or at least aspired to supersede) Europe as the vanguard of Western artistic and intellectual life complicated matters. After all, Europeans were accustomed to thinking of home-grown American culture as raw and vulgar. It was low-brow and derivative, with aesthetic considerations typically taking a back seat to commercial ones.

Unlike postwar Europe, however, America was neither tapped out nor demoralized. This alone imparted to American artists and intellectuals enormous advantages. In important respects, it all came down to money. After World War II, the Americans had most of it, which conferred on them a crucial edge when it came to setting trends, making a stir, and above all marketing their wares.

Embedded as a fascinating subtheme of Menand’s account is the grubby careerism of the creative class. Rarely did ethical considerations or friendship, much less marital vows, get in the way of crass ambition. Artists, Menand writes, are “people for whom posing and conniving are just part of business.” The Free World is replete with examples of conniving, betrayal, and infidelity as the ostensibly high-minded scrambled for fame and fortune.

Particularly in the expressive arts, radical rather than incremental change became the order of the day. “[C]ulture is a blob of mercury,” Menand observes at one point. “Whenever you try to put your finger on it, it takes a different shape.” Whether that claim works as a generalization, it certainly reflects Menand’s take on postwar Western culture. In every arena of endeavor, shapes needed changing. They did so big time.

So Menand shows how cutting-edge American artists such as Jackson Pollock “jettisoned certain commitments … that had previously seemed sacrosanct or indispensable and showed that life would go on without them.” By “abandoning things that no longer worked,” they changed the basic vocabulary of painting. Something similar happened in other artistic realms.

The composer John Cage derided Beethoven’s oeuvre as “deadening to the art of music.” His offense: “believing that harmony is the basis for music.” So goodbye to harmony and hello to atonality and experiments such as Cage’s 4’33”, a composition featuring the complete absence of sound. What Cage did for music Ginsberg’s “Howl”—“I saw the best minds of my generation destroyed by madness, starving hysterical naked”—did for poetry.

Standards for judging artistic achievement were changing. Sublime and uplifting were out. Breaking crockery was in. Audacity, shock value, nose-thumbing, trampling on the hitherto sacred: In Menand’s interpretation, these emerged as defining themes of Free World culture.

How do the cultural products of this angst-laden era stack up against earlier periods? What do they signify to our own troubled time? As someone who much prefers Aaron Copeland’s Appalachian Spring to Cage’s 4’33” and almost any piece of verse by Robert Lowell to Ginsberg’s “Howl,” I may not be the best person to reflect on such matters. (Copeland and Lowell do not make Menand’s roster of “headliners.”)

So to me at least, the purpose of this intriguing book remains difficult to decipher. Even as long as it is, The Free World ends abruptly and, to my mind, arbitrarily. In doing so, it leaves much unresolved.

Toward the end of his account, for example, Menand reflects that already by the sixties “Very few people knew who Lionel Trilling was,” whereas just about “Everyone had heard of Elvis Presley.” Today, a generation or so later, Trilling, a leading public intellectual during the early Cold War, has all but vanished. As a cultural presence, meanwhile, Elvis lives on.

What explains his enduring significance? For answers, the curious will have to look elsewhere.

Andrew Bacevich is president of the Quincy Institute for Responsible Statecraft. His new book is After the Apocalypse: America’s Role in a World Transformed.