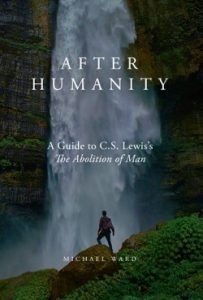 Accessibility is a hallmark of the works of C. S. Lewis, and an element that made him one of the most popular authors of the twentieth century. As an academic, he studied Medieval and Renaissance literature, but as a popular author he explored various topics (theology, fairy tales, philosophy). Despite being known for his literary prowess, Lewis was fascinated by philosophy—a difficult yet rewarding subject. In February of 1943, amid the events of World War II, Lewis gave three lectures at the University of Durham that would later become The Abolition of Man.

The book is a philosophical work (not a Christian apologetic) and one of Lewis’s least accessible books in relation to his other works. He did not engage Christian theology particularly in order to prove that his question(s) were universal to humanity, not pillars of religious dogma. The lectures propose a moral diagnosis of his age—one that he observed as a steady move away from objective moral value toward a new level of subjectivism.

Lewis’s attempt at philosophy has garnered interest across a wide audience ranging from British atheist philosopher John Gray to Pope Benedict XVI (Ratzinger). Abolition is as relevant now as it was in 1943 due to its examination of a civilization that veers wildly one way or the other towards the rational or the sensual. Through his lectures, Lewis deliberates on what caused the separation of the sensual and rational as he examines the possibility of harmony within the individual—one that unites head, chest, and belly. This unity is reflective of a philosophical heritage and the idea of humanity as the reasoned animal—one that sees the chest (human/unifier) as the connection between the head (spiritual/intellectual) and the belly (sensual/animal).

Despite his intelligible style, Lewis’s “almost favorite” book is both difficult and complex. It would stand to reason that someone would eventually draft a guide to better understand this philosophical treatise. English literary critic and theologian Fr. Michael Ward takes on the role of guide in his latest book, After Humanity. Fr. Ward is a senior research fellow at Blackfriars Hall, Oxford University. He became a recognized Lewis scholar through his deeply insightful 2008 book Planet Narnia: The Seven Heavens in the Imagination of C. S. Lewis. Ward guides readers in understanding Lewis’s view that the definitive human faculty to combine the sensual and the rational has been lost.

Ward clearly states that the guide is not written to “adjudicate between the different responses to Lewis’s argument.” Instead, “After Humanity examines ‘what’ Lewis said, ‘why’ he said it, and ‘how’ he did so.” Ever the mindful guide, Ward does not simply jump right into the philosophical weeds but provides context and background before he examines the three lectures. The first two chapters, “Reception” and “Occasion and Context” describe how the book was received after it was published, as well the historical context in which it was written. Ward does not begin his “Commentary and Gloss” until chapter seven—after he provides the reader with an overview, a discussion on whether this is a religious work, background, and legacy.

As a historian, this reviewer found the preceding chapters to be necessary elements for Ward to achieve the goals of answering what, why, and how. Lewis’s diagnosis of the age is specific and deeply affected by both World Wars. Lewis was nearly blown up in the Great War and found himself as a volunteer in the Home Guard (originally the Local Defence Volunteers) during World War II. It is crucial to understand the historical context of the first half of the twentieth century in order to understand the perennial nature of Abolition. Ward provides a compelling narrative before he guides readers in a close reading of Lewis—one that begins quickly with Abolition’s title page and the first of four epigraphs found throughout.

In each lecture (“Men Without Chests,” “The Way,” and “The Abolition of Man”), Ward adroitly selects passages that examine Lewis’s discussion and argument. Lewis provides a check-up, a diagnosis, and a prognosis through his respective lectures. According to Ward, Lewis uses relevant examples like The Green Book and its authors as platforms to address his central concern: objective moral value. For Lewis, “death for a good cause” is a crucial experiment of the objectivity of moral value. As Ward points out, if dying for one’s country is merely subjective, then this would change as soon as it did not serve individuals to suffer and die for one’s country. Through Ward’s guidance, the reader begins to see that Lewis creates a question that cannot be dismissed simply.

The conditions of education, seen in The Green Book, provide opportunities for Lewis to smuggle in questions and address his concerns. After Humanity examines, with clarity, the complexity of Lewis’s discussion. Ward is widely read, not only on Lewis and his meaning, but how the intellectual atmosphere and historical context of the 1940s is woven into the fabric of a larger conversation. Nonetheless, his comprehension of Lewis radiates throughout the guide. He even provides commentary on Lewis’s notes, which proves his intimate knowledge of one of the twentieth century’s deep thinkers and prolific authors.

After Humanity possesses a refreshingly interdisciplinary approach, one that is not corrupted by microcosmic interests and specificity. Admittedly, Ward is not a “scholar” in all the disciplines he employs—history, literary analysis, philosophy, et cetera. The generalist approach reflects the benefits of a guided close reading—one that also draws from Confucius, Alan Jacobs, Micah Watson, and others.

In the center pages of Ward’s guide, he includes a photo gallery. And herein lies this reviewer’s harshest criticism—there should have been more entries. Pilgrims on this journey will also find a list of thirty-three “Questions for Discussion.” Here we find this reviewer’s second harsh criticism—stop considering the reader and his or her desire to discuss the book in depth with groups! Sarcasm aside, any book review worth its salt needs to point out flaws or possible suggestions to present a level and objective view of the work as a whole. Apologies are in order; on this occasion there is not enough criticism to fill a paragraph.

Ward is explicit in his plan and intentions. With readers in mind, he carries out his plan to serve as guide and translator of C. S. Lewis’s philosophical treatise, The Abolition of Man. In order to avoid a microscopic view of Lewis’s lectures, Ward’s “Conclusion” directs his pilgrims to see beyond the specific aspects: “educational practice, literary criticism, linguistics, scientific inquiry, and various other fields.” He wants readers to view the book with a larger perspective in mind.

For Ward, the book in its entirety can be seen through four subheadings: “prophecy, poetry, participation, and power.” Echoing the sentiments of Lewis, Ward’s dissection serves as a guide; it does not seek to destroy the fabric as a whole. Ward tells us: “The real purpose of analysis is synthesis: you untie in order to unite.” Ward is gracious with Lewis and gracious with his readers (including that if consumers purchase After Humanity from the publisher’s website, a free copy of The Abolition of Man is included).

Philosophy is commonly perceived as a difficult discipline reserved for bobble-head academics and residents of ivory towers. If readers want a theologically themed popular version of Abolition, they would be wise to read the first three or four chapters of Lewis’s Mere Christianity. If readers forgo their apprehensions about philosophy, accept that Abolition is a difficult read in comparison, and pursue wisdom with a contemporary and knowledgeable guide, they may surprise themselves at what they discover. Ward acts as teacher to the curious student in this much needed and long overdue companion to C. S. Lewis.

Chris Butynskyi is the author of The Inklings, the Victorians, and the Moderns: Reconciling Tradition in the Modern Age (2020).