Chantal Delsol and the End of the Christian World: A Symposium 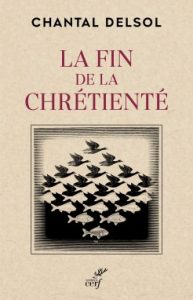 This past January 30th and 31st, 2022, the Abigail Adams Institute, First Things, and the Zephyr Institute hosted a number of prominent scholars and writers in Cambridge, MA, for a conference on the theme: The End of Christendom and the Rise of the Pagan West. The conference’s aim was to reconsider the thought of French political thinker Chantal Delsol in light of her latest book, La fin de la Chrétienté or The End of the Christian World.

As the conference directors argued:

Throughout the West, Christianity appears to have collapsed. Never in modern history have Christian ideas about human dignity and personhood, about the permanency of morals and the necessity of familial society, been pushed so far from law and public life. This ‘secularizing’ trend shows no sign of abating.

What, however, is the significance of this ‘secularizing’ trend? In rejecting permanent morals, does it represent a turn toward relativism, even nihilism? Or does the ‘secularizing’ trend indicate not a complete rupture from theological concepts, but the persistence of these theological concepts in public debate even if their use has changed? Or does secularization point toward the intensification of Christian theses—for example, a kind of ultra-Christianity that entrenches a politics of victimhood?

These debates on the meaning of secularization reflect the positions taken by, among others, Augusto del Noce, Carl Schmitt, and René Girard. Yet Chantal Delsol has argued for a different thesis. The late modern, ‘secularizing’ trend should not be understood as the triumph of relativism or nihilism, except in the short term. In the medium and long term, late modernity represents the substitution of one set of morals by another. This is not a Christian, ultra-Christian, or even post-Christian set of morals. For Delsol, Christianity in the process has been left behind and discarded in moral, legal, and political thought. The West is transforming into something resembling a pre-Christian civilization, a pagan civilization. In this context, how should Christians transmit their faith and what is left of their civilization? In these changing circumstances, is the idea of a Christian culture still desirable, let alone possible?

The University Bookman is proud to partner with the sponsoring organizations to publish some of the key papers delivered at this conference. In doing so it hopes to shed some light on, and stimulate even more reflection and conversation on, the nature of the transformation of Western culture characterized especially by a rejection of Christian anthropology and its ethical foundations.

We will publish one essay per day from the conference beginning with Chantal Delsol’s own summary of her thesis on the re-paganization of the West. She will be followed on Wednesday by Daniel J. Mahoney, on Thursday by Nathan Pinkoski, on Friday by Godefroy Desjonquères, on Saturday by Brendan Case, and on Sunday by Jonathan Yudelman.

Special thanks to Danilo Petranovich, Director of the Abigail Adams Institute, and Nathan Pinkoski, Research Fellow and Director of Academic Programs at the Zephyr Institute, for their far-sightedness in organizing these important proceedings and for approaching the University Bookman to publish them.