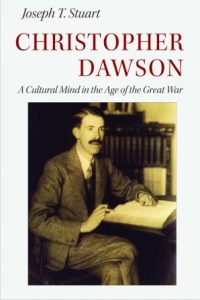 Christopher Dawson: A Cultural Mind in the Age of the Great War
By Joseph T. Stuart.
Catholic University of America Press, 2022.
Paperback, 448 pages, $29.95.

The University Bookman is proud to offer this three-review symposium on Joseph T. Stuart’s important new book, Christopher Dawson: A Cultural Mind in the Age of the Great War. Please join us on January 10, 2023, at 7:00 p.m. EST as we host Dr. Stuart on our monthly “The Book Gallery” webinar. Register to participate at this link. — The Editors

Tom Dilworth, the biographer of David Jones, once assured me that “Christopher Dawson was right about everything.” I was doubtful at the time, but Joseph Stuart has nearly persuaded me in this admirable intellectual biography. Stuart makes the case for Dawson as one of the most significant sociologists of culture in the twentieth century. In the Dawson revival which has been taking place since the 1990s, most works have either concentrated on Dawson’s life, his historical works, or his relationship to Catholic thought. Stuart’s great achievement is to show the breadth of Dawson’s work and to situate his thinking in a much broader intellectual tradition. The chapter on Dawson’s sociological thought, for example, shows us how he built on the ideas of the thinkers of the British Sociological Society, such as Patrick Geddes, Victor Branford and Leonard Hobhouse, but also how he referenced seminal European thinkers such as Frédéric Le Play and Max Weber. Dawson was a Catholic thinker not only in terms of his faith but also in the range of his intellectual influences.

In Stuart’s focus on Dawson the thinker, however, Dawson the man can sometimes get lost. There are enjoyable flashes of his character in vignettes such as E. I. Watkin visiting him in Yorkshire. Dawson also comes to life later on in the book valiantly trying to bring about educational reform at Harvard. Elsewhere, however, it would have been nice to see more of his biography spliced through his intellectual development. We get little context, for example, on his conversion to Catholicism in his youth, or his attitudes to the Second Vatican Council in his old age. There are times, too, when a prosopographical approach might have helped show Dawson’s interactions with his immediate circle of friends as well as the broader trends of European culture. Stuart writes well on Dawson’s involvement in organizations such as the Moot and the Sword of the Spirit. It would have been good to see more on Dawson’s intellectual influences in his youth, especially his involvement with the Order circle, named after the short-lived periodical of the same name edited by the publisher Tom Burns.

In the late 1920s, Dawson met many of the other young influential Catholic writers of the day at an informal salon at Burns’s house in Chelsea. Many of the attendees became close friends of Dawson such as the poet and artist David Jones; Alick Dru, the translator of Kierkegaard; the art critic Francis Howard; Harman Grisewood of the BBC; and the author and publisher Bernard Wall. These people, some of them little referenced in Stuart’s account, played an important role in helping Dawson articulate some of his key ideas. Stuart, for example, references Dawson’s idea of “bridge building” influenced by the saying associated with Bran the Blessed: “He who will be chief, let him be a bridge.” According to Stuart, this image “shaped the way Dawson perceived his deep mission: to connect divergent realities in a world fragmented by the Great War and resulting political ideologies.” There is a significant parallel here with David Jones’s idea of “the Break,” a rupture in recent history which his art tried to overcome. In Jones’s preface to his long prose poem, The Anathemata, he writes about how this idea was discussed amongst his most immediate friends in the twenties and thirties: Dawson’s key influence here is a fruitful area for future research.

These minor flaws aside, Stuart’s great achievement is to show Dawson to be a writer worthy of serious attention even from those not already sympathetic to his politics or religion. Despite rarely holding academic positions apart from a short stint at University College Exeter from 1925-33 and his chair at Harvard which he gained in 1958, Dawson’s writing is characterised by meticulous scholarship and sober even-handedness. For all that Dawson was a committed Catholic, he tried not to slavishly follow the “Catholic” interpretation of English history which saw all good things end with the Reformation. Hilaire Belloc and G. K. Chesterton, for example, tended to see the Middle Ages as a golden age of Catholic culture. In The Making of Europe (1932), Dawson was keen to distinguish the historian from the propagandist who “tends unconsciously to falsify history in the interests of apologetics.” Christian apologetics was a “danger to which Catholic historians of the Middle Ages are peculiarly exposed, since the romantic revival first brought in the conception of the Middle Ages as ‘The Age of Faith,’ and of medieval culture as the social expression of Catholics ideals.” Dawson felt that Catholics were “too obsessed by the Middle Ages.”

Despite, or perhaps because of, the even-handedness of his scholarship, Dawson was comfortable in expressing his own views when he needed to. He wrote in Medieval Essays (1954) that “Medieval Christendom is the outstanding example in history of the application of Faith to Life: the embodiment of religion in social institutions and external forms.” Dawson also claimed “there has never been an age in which European culture was more penetrated by the Catholic tradition, or in which Catholic ideals found a fuller expression in almost every field of human activity.” Dawson tried to maintain a distinction between an idealization of the past and recognition of, to him, the eternal truths of the Catholic faith. Dawson did not, therefore, have a simplistic view of a medieval “golden age” in terms of the external structures of society. He did, however, believe there was something in its cultural underpinning which was important and worthy of admiration.

Dawson’s scholarly impartiality is also evident in his work on comparative religion. As Stuart demonstrates, his attitude to Islam shows how far he was from simplistic Western triumphalism. Dawson’s cultural history draws on a greater awareness of the similarities and cross-fertilizations between different religious and cultural traditions than, for example, the work of Oswald Spengler. Spengler’s ideas about the cyclical nature of decline endured enormous popular success in the interwar period followed by almost universal disdain post-1945 after its perceived associations with the radical right. Dawson was an early reader of Spengler and criticised the way in which Spengler seemed to suggest separate rhythms among various cultures and civilizations. According to Dawson in Progress and Religion (1929), “Oriental” and “Western” culture “flowed for several centuries in the same bed, mingling with one another to such a degree that they seemed to form a new civilization.” Dawson was well aware of the various ways in which the “East” influenced the “West” as well as the other way round.

Where Dawson’s thought is perhaps most controversial, or as Stuart argues, misunderstood, is in its critique of aspects of political and economic modernity, especially in relation to the rise of fascism. In his political works, Dawson was even more critical of some aspects of modern culture than Catholic writers such as Belloc or Chesterton. Belloc and Chesterton, for example, had a positive view of the French Revolution, seeing it as democratic and patriotic. Dawson, however, felt that the French Revolution led to “individualistic atomism” and the “coldest of cold monsters,” the “bureaucratic state.” Some scholars, therefore, see Dawson’s interpretation of fascism as showing signs of sympathy because he seems to agree with some of fascism’s critique of political and economic liberalism. Stuart persuades us that this is part of Dawson’s original attempt to take the philosophy of fascism seriously in order to better understand it, not evidence of sympathy with it. Dawson analyses fascism in great detail and ends up rejecting it unambiguously. However, Stuart might be a little more nuanced in showing how Dawson, like many Catholics confronted with the polarized politics of the 1930s, sometimes presents the case for fascism in a way which makes it seem the lesser of many evils. While Dawson is hyper-anxious to present fascism objectively, for example, he cannot maintain the same equanimity when it came to Communism, which he saw as the “first time in the world’s history” where “the kingdom of the Antichrist has acquired political form and social substance.” To be more open about these less temperate views of Dawson helps to humanize him and does not distract from his overall rejection of the extremes of the radical right. Stuart quotes Bernard Wall as writing in his autobiography that “some people thought that Christopher and I were pro-Fascist. This confusion arose because in the general hysteria of the time … Christopher went on calmly disentangling the sociological threads in Europe.” There is a hint of post-hoc justification here. To admit the lapses in both Dawson and Wall does not take away from the fact that they confronted the political crisis of their time with intelligence and integrity.

The relevance of Dawson’s views on fascism for readers of The University Bookman today relates to his equally harsh critique of modern secular liberalism. For Dawson, the political system which has arisen in the secular west has totalitarian potential, even if it ostensibly celebrates liberty. In Beyond Politics (1939), Dawson even suggests that such “democratic totalitarianism” was comparable to the dictatorships of fascism or communism. “The forces that make for social uniformity and the mechanization of culture” in England and the United States, he wrote, “would make the same universal claims on the life of the individual as the totalitarian dictatorships of the continent.” Negative aspects of Western democracies, particularly the pursuit of selfish individualism and material satisfaction, occasionally lead Dawson to criticize democratic regimes in harsher terms than the dictatorships: “What we are suffering from,” he writes in the conclusion to Religion and the Modern State (1936), “is the morbid growth of a selfish civilization which had no end beyond itself—a monstrous cancer that destroys the face of nature and eats into the heart of humanity. As in the days of ancient Rome, but on a far larger scale, men have made themselves master of this world, and find themselves left with nothing but their own sterile lusts.” We may agree or disagree with Dawson’s diagnosis. However, it is better to critique the ills of the modern world in the calm and empathetic way in which Dawson does in most of his work than in the polarized and angry polemics of contemporary political discourse. Joseph Stuart has done us a great service in reminding us that Christopher Dawson confronted the great cultural issues of his and our own time with openness, integrity and restraint.

Tom Villis is Professor of History at Regent’s University London.