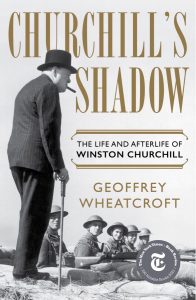 In this new study of Winston Churchill’s life and (especially) his afterlife, Geoffrey Wheatcroft quotes H.G. Wells’s advice that “a successful biography should be written by one’s conscientious enemy.” Wheatcroft’s book is not a biography in the formal sense, but he certainly follows Wells’s dictum.

Interest in Churchill never flags. More has been written about him than about any of the other Big Four of World War II. He was the least significant of the Four, but the only one to write a memoir of the war (his six-volume history of that conflict). In recent years, Andrew Roberts produced a massive biography which will remain the definitive one for a long time. (Wheatcroft does not think highly of it—too favorable in his view). The historian and novelist Erik Larson focused on one year of Churchill’s career, 1940-1941, in The Splendid and the Vile, which was a popular success although it added little to our understanding of Churchill’s war record or life. Now Wheatcroft has decided to take a new look at the Churchill phenomenon and especially Churchill’s afterlife—or how he has been regarded in the six decades since his death.

Afterlife studies have become popular in the last half century as a way to understand the phenomenon of why a particular historical figure made a lasting impact and what that tells us about the state of historical understanding. Wheatcroft believes that Churchill suffered more from his hero worshippers than from his detractors. He sets out to correct that flaw with a vengeance.

Wheatcroft writes that in order to understand Churchill he tried to see him “through the eyes of his contemporaries.” But then he admits that his focus will be on “particular aspects of his career, his imperial and racial attitudes…his strategical ambitions, obsessions, and follies…” This, in my view, unbalances an otherwise well-written and fascinating overview of the Churchill phenomenon.

Wheatcroft is correct to note that Churchill is more popular and more influential in America than in his native England. There are more Churchill societies and organizations in the United States than in England. There is even an excellent journal, Finest Hour, dedicated to writings about Churchill and his times. Several presidents, including George W. Bush and Trump, made a point of displaying his bust in the Presidential Office. Obama, whose father was from Kenya, had little time for the old Imperialist and Biden has replaced Churchill with a bust of Cesar Chavez (among others).

Except for Churchill’s memoir of his youth, My Early Life, Wheatcroft does not think much of Churchill’s historical writings. He dismisses them as journalism and not history. I think he is wrong in a couple of cases. The River War, written about Kitchener’s reconquest of the Sudan, is good storytelling and one of the basic sources for that topic. The first chapter on the importance of the Nile for Egypt is a gem. I also believe he underestimates The Great Contemporaries, Churchill’s sketches of some of the major figures of his lifetime. Those dealing with Lord Rosebery, Joseph Chamberlain, and Arthur Balfour reveal a deep understanding of character and what motivated these key figures of Late Victorian England.

On a more important level, Wheatcroft argues that no one reads Churchill’s multi-volume histories of World War I, The World Crisis, or his six-volume history of the Second World War. The latter point is wrong. If you pick up any history of World War II you will find Churchill’s book in the bibliography. This is especially true of the first volume, The Gathering Storm, which, in its attack on the failures of appeasement, formed our understanding of the failures of the Allies that led to World War II.

Wheatcroft is a revisionist in his treatment of the appeasement issue, arguing correctly that Neville Chamberlain deserves credit for launching the rearmament movement in England while downplaying Churchill’s role, noting that Churchill was often wrong in his analysis of events. Still, it was Churchill who correctly predicted that the outcome of the high-water mark of appeasement, the Munich Pact, would lead to war.

Wheatcroft makes much of the fact that Churchill’s books after My Early Life were really the work of a syndicate of talented writers and scholars that Churchill enlisted to help him in his writing. This has been known for some time and has been analyzed in David Reynolds’s study In Command of History. While these scholars may have unearthed and outlined the material, it was Churchill who rendered it in his memorable prose: part Gibbon and part Macaulay.

Wheatcroft also believes Churchill’s wartime histories compare unfavorably to Lloyd George’s memoirs of World War I or de Gaulle’s three volume history of his role in World War II. Churchill, he argues, should have waited before writing—he started the first volume of The Second World War  in 1946 and published it two years later. But  Churchill was seventy-four when he began writing his histories while Lloyd George was in his fifties when he wrote his, and de Gaulle in his mid-sixties. Churchill did not know how much time he would have to get his story before the public.

Churchill’s Shadow is written with a verve typical of Wheatcroft’s best journalism, but there is a sour touch running through the book. While he is correct to try to balance Churchill’s greatness (and he was the greatest political figure of the twentieth century, there is no doubting that), much of Wheatcroft’s quibbling has a sourness about it. What is the real purpose of the book? To show that Churchill was flawed. Every serious biographer, including votaries of Churchill such as Andrew Roberts and his official biographer, Martin Gilbert, recognize that their hero was not perfect.

Sometimes in searching out flaws in Churchill, Wheatcroft reveals his own prejudices. He is not impressed, for example, by Churchill’s painting, claiming his taste was not discriminating. “He showed little enthusiasm,” Wheatcroft writes, “for Post Impressionists and none at all for their Cubist successors.” Some might argue that is a plus for Churchill.

Wheatcroft’s book is well written and shows an overall broad grasp of the events of Churchill’s life and times. There are a number of petty mistakes: Pétain was not at the French surrender at Compiegne in 1940, General Jodl was never a Field Marshall, Senator Nye’s first name was not General but Gerald.

Overall, Churchill’s Shadow can be seen as a balance to those books which hero worship Churchill and as an interesting, if flawed, contribution to Churchill studies.