Civil Society and the Marketplace 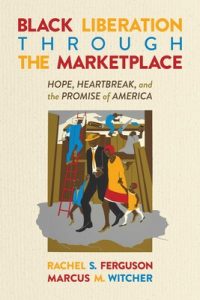 Perhaps the first book ever published to cite both Master P and Russell Kirk (and on the same page at that), Black Liberation is an excellent primer to understand black American history through the lens of classical liberalism. Although the book does not contribute original historical research, its strength derives from the authors’ comprehensive and persuasive attempt to utilize the guiding principles of this intellectual tradition—including freedom of contract, private property, equal protection of the law, freedom of conscience, and religious liberty—to illustrate the ways that black progress has been inhibited and advanced throughout U.S. history.

According to the co-authors, Rachel S. Ferguson, an economic philosopher at Concordia University Chicago, and Marcus M. Witcher, assistant professor of history at Huntingdon College, progressive and conservative perspectives on racial politics are inadequate to grasp the complexities of black history. They suggest the former places excessive emphasis on oppression and the latter on individualism. Black Liberation is a bold effort to reframe this conversation by locating the core premises of classical liberalism at the center of discussion over slavery, black entrepreneurship, black civil society, housing policy, and a host of other race-related topics. In addition, Ferguson and Witcher seek to refute the crucial presupposition of the New York Times’ 1619 Project that American capitalism has perpetuated racial injustice. The result is a sharp synthesis of a variety of methodological approaches that aspires to show how: a.) The state’s violation of core tenets of classical liberalism has served as the chief obstacle thwarting black advancement; and b.) The recovery of these tenets offers the most promising means for black progress, and hence black liberation.

Black Liberation seems to be written primarily for a general audience rather than for scholars. The prose is oftentimes engaging and at particular moments reaches the high pitch of sermon-level rhetoric. But it also employs a conversational tone, sprinkled with colloquialisms, that is typically avoided in academic books.

Yet this flavor of pen is ultimately an asset for Black Liberation. The authors review the arcane scholarly literature from several subdisciplines, ranging from economics to political theory to history to sociology to theology, in a lucid and accessible fashion, a quality especially helpful for readers who may not be familiar with the terms of debate of racial controversies in American history. Those who wish to engage with the more scholarly versions of the book’s arguments should consult the works of Thomas Sowell, from whom Ferguson and Witcher try to distance themselves but whose writings on race bear a closer resemblance to the logic of Black Liberation than they insinuate.

Black Liberation is divided into an introduction, ten chapters, and an epilogue. Each chapter tackles a different theme that relates to black history, including slavery and abolition, black property rights, the black church, labor unions and the minimum wage, and U.S. housing policy and the federal highway system. The final two chapters and the epilogue confront contemporary public policy debates concerning education, criminal justice, and reparations. Each chapter then applies the aforementioned principles of classical liberalism to these discussions. Throughout their careful examination of such themes, Ferguson and Witcher convincingly demonstrate that the failure of federal, state, and local governments to protect blacks’ rights to property and freedom of contract, as well as to secure the equal protection of the law, imposed severe hindrances on their social and economic advancement.

The authors do not shy away from highlighting egregious and violent examples of such failures, including the Colfax Massacre, white lynch mobs, and government attempts to regulate blacks’ economic activities. Yet they also underscore the many examples of black achievement in business, education, and civil society prior to and following the Civil Rights Movement. Particularly articulate and poignant sections included those that chronicled the steady ascent of black entrepreneurship, the proliferation of self-help groups and fraternal orders, and the grave harm inflicted by urban renewal programs and federal construction projects on black neighborhoods. True to the spirit of classical liberalism, the broader lesson the authors convey throughout these chapters is that social engineering schemes have generated destructive consequences on black communities.

The chapters could have benefited from more specific descriptions of the various subgroups within the general classification of “black”—American-born blacks who trace their ancestry to the antebellum South and North, black Americans whose families emigrated from the West Indies and Africa in the twentieth century, and so on. Such distinctions warranted greater examination in order to bring out the full complexity of socioeconomic trends within American black communities, especially since Ferguson and Witcher employ the terms “black” and “white” consistently to structure their analysis of race relations.

The authors’ use and representation of classical liberalism also requires scrutiny, both on a general level of political theory and in their specific application of the creed to black history. First, many of the key precepts Ferguson and Witcher cite as distinctive of classical liberalism predate classical liberalism, including property rights, freedom of contract, and the rule of law. Second, the authors paint an unblemished picture of classical liberalism without seriously grappling with its imperfections, a tendency that is admittedly common among defenders of all intellectual traditions. The effect is to cleanse it of any taint of racial prejudice, overlooking the ways that classical liberals, some of whom the authors cite, have: a.) Rationalized invidious racial distinctions in practice (cue John Stuart Mill’s “[d]espotism is a legitimate mode of government” quotation from On Liberty); b.) Perpetrated racial discrimination themselves (such as William Lloyd Garrison exploiting former black slaves to advance the abolitionist agenda); and c.) Espoused principles such as free trade that are difficult to disentangle historically from other practices the authors rightfully deem odious, such as the violent expansion of empire and, as it were, slavery. To wit: Although Adam Smith, like Edmund Burke, found slavery morally repugnant, they supported free trade relations between West Indian and American colonies—a trade that necessarily included the trafficking of slaves. There surely is a “no true Scotsman” argument to be made in this context, for classical liberalism would seemingly repudiate instances of racial prejudice on principle, but an acknowledgment of some of the less scrupulous actions of classical liberals pertaining to race would have demonstrated a necessary measure of critical self-reflection throughout Black Liberation.

Furthermore, Ferguson and Witcher at times succumb to the tendency of calibrating black (and human) progress primarily by the standards of wealth, material prosperity, and economic growth. These considerations are certainly important marks to gauge human flourishing. But there are of course other variables to take into account—such as happiness and fulfillment in one’s local community, even if remaining in it forsakes greater opportunities for higher incomes and social mobility in a bigger city—that called for sharper attention. I suspect the authors would not disagree with this basic proposition, given their impressive discussion of black civil society, but the heavy focus on wealth maximization in some sections overwhelms such other crucial considerations in the book’s analysis of black progress.

Finally, and most important, on the matter of civil society: There is a healthy yet unresolved tension throughout the text between the authors’ embrace of free markets and their praise of the many religious, social, and charitable institutions black Americans have built up throughout their history. Ferguson and Witcher keenly identify the strengthening of black civil society as the ultimate remedy for black progress—and yet the title of the book, and its driving impetus, lay foremost priority on the market as the instrument for progress.

Commercial activities and civil society are not only compatible but harmonious, as Tocqueville, Hegel, and Du Bois observed. But: While the virtue of markets is their capacity to generate wealth and raise standards of living for men and women from different socioeconomic backgrounds, the virtue of civil society is its ability to preserve traditions, customs, and institutions that are not wholly dependent on the price mechanism, temporary desire, and subjective preference. Whereas the authors contend that the revival of black civil society is the best path forward for advancement, this is not the same thing as saying, as the title indicates and as the authors eloquently write elsewhere, that the market is the liberating force for blacks. Besides, the incentive structure of market economies to monetize social relations can often lead to the corrosion of culture if not anchored in enduring moral and religious foundations.

The meaning of “liberation” itself is ambiguous at times throughout Black Liberation. One can certainly use the word, as perhaps the authors intend, to describe the way that black civil society liberated blacks insofar as its institutions enabled them to find spiritual refuge and receive material support independent of the surrounding white population. On the other hand, such institutions—the family, the church, the fraternal order, the neighborhood charity—cooled the temptation for liberation in the sense of encouraging blacks to fulfill their local obligations to kin and community rather than emancipate themselves from these ethical and religious commitments. And, once again, these structures of social organization were not primarily dependent on economic liberation, as the book’s title and some of the chapters would suggest, to sustain their existence and carry out their noble aims.

Freedom of association, as the authors do note, is a central tenet of classical liberalism and a necessary principle of a thriving civil society. But this phrase is still not enough to capture the full picture that emerges from Ferguson and Witcher’s exceptional treatment of black history. Rather, the dynamic blend of entrepreneurship, self-help organizations, and institutions and traditions of civil society formed a rich cultural inheritance of black America—a lengthening of black memory from generation to generation—that included but transcended liberation through the marketplace.

It is therefore curious that the authors indict conservatism, rather than classical liberalism or progressivism, as the ideology that places inordinate emphasis on the individual. The notion that the individual is embedded into broader social, religious, and cultural institutions and traditions is more closely identified with conservatism than any alternative intellectual school. Classical liberalism itself has been a target of conservatives on precisely the same grounds that it elevates the maximization of individual autonomy above all other obligations and attachments to community and place. (The Smithian-Humean brand of classical liberalism admittedly conflicts with this narrative.) All of which is to say: The authors’ celebration of civil society as the most promising prescription to spur black progress may be more consistent with conservatism than the authors let on. At the very least, there is enough common ground between the communitarian strands of classical liberalism (and progressivism) and conservatism for all of these doctrines to recognize the importance of civil society to members of different races and ethnicities.

In the end, such theoretical challenges to the philosophical framework of Black Liberation should not overshadow the book’s vital contribution to contemporary racial discourse. It is the best distillation in recent memory of the classical liberal approach to grasping the intricate dimensions of black history and black political economy. If one is looking for a compelling and persuasive account of these subjects through a classical liberal lens—or simply an alternative to the 1619 Project—it will be difficult to find a contemporary volume that does so as comprehensively and accessibly as this one.

Gregory M. Collins is a Lecturer in the Program on Ethics, Politics, and Economics at Yale University. His first book, Commerce and Manners in Edmund Burke’s Political Economy, was published by Cambridge University Press in 2020. He is currently working on a manuscript on the idea of civil society in black political thought.